Todayâs article is brought to you by the word âcould.â Weâre a âshouldaâ kind of series, focusing on how you should build to make sure your deck never languishes in your bag or box because the table is too casual or too competitive. Itâs all about Goldilocks deck-building in this series, and to thread the needle correctly, it takes a lot of pre-planning. Sometimes we dismiss cards and strategies out of hand because we have a tough time reconciling them with the deck-building ethos weâre driving at. Sometimes we need to take a step back and ask ourselves if we shouldnât reconsider.

I should wait for the full spoiler to be out to talk about Rashmi, Eternities Crafter. After all, cards could come later that synergize with her well and these decklists should be a bit more timeless. In 6 months when someone looks back at this article, it wonât be obvious that I wrote it before the full spoiler was out. Some card will be missing that was spoiled later, some silly vehicle, probably and someone will read the article, see the vehicle is missing and say âWhy isnât he playing Kia Altimate Warrior?â or whatever name theyâre going to give to the vehicle that synergizes with Rashmi and when no one answers because the comments on this article will be locked in 6 months, theyâre going to think âI must not understand 75% at allâ.â.â.ââ and quit Magic and get caught up in the wrong crowd and instead of meeting their future wife at FNM theyâre going to be involved in a Yu Gi Oh card Ponzi scheme and die on Death Row. That sounds hyperbolic, but that is also literally what is going to happen. I have to navigate those kind of outcomes when I decide what to write about every week. Even though Iâm dooming someone to the electric chair if I do, Iâm going to write about Rashmi because thatâs how excited I am about her. Seriously. Have you read this card? 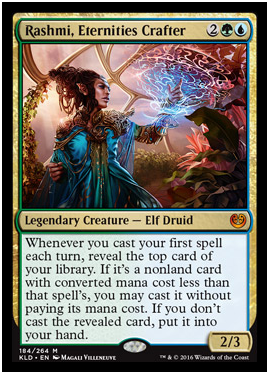 If they had printed this card when Prophet of Kruphix were still legal in Commander, Magic would have exploded. As it is, we can approximate Prophet in a few ways and itâs going to be pretty nuts. I think the best way to use this card is to cheat like a mad lunatic and do it every turn if possible. Not every one of your turns, every turn. On their turns, too. Even if youâre just drawing every turn because you played a spell or creature with flash, youâre still in good shape. This card is so broken I have temporarily forgotten how much I want to build a Leovold, Emissary of Trest deck (something I had a one week window to get accomplished, apparently) and focus all of my efforts on Rashmi. This card is good and powerful, but is it 75%? Moreover, are the cards weâre really tempted to put in this deck 75%?

I donât like Top. I canât eradicate it from existence, so I do the next best thing and just donât include it in my 75% decklists. If I see it in a decklist proposed as a 75% list suggested by someone else, I will include it in a list of cards Iâd likely cut from the deck. Why? Because Magic players are children sometimes. I canât put anything on my infant daughterâs high chair tray when I am feeding her because sheâll be too distracted by that thing to remember I am trying to feed her. If it were up to her, sheâd starve to death in her high chair because she was having too much fun playing with the wet paper towel I was using to clean her face to remember to eat food. You put anything on that tray, sheâs going to grab it, smack it against the tray a few times and throw it on the floor. Why? Is that better than eating? No, but she does it because itâs there. Thatâs how I see Magic players with Senseiâs Top. âOh, hang on did you pass priority? Iâm going to peek at my top 3. Wait, did you cast a spell? I need to reorder my top 3. This is Commander and I have 14 mana so Iâm going to be doing this a LOT before itâs your turn again.â I play with so many people who durdle with their top because they could, not because they should. Top isnât too oppressive to play in a 75% deck. It doesnât make you too consistent. I literally just donât like including it in decks because that would be me advocating its use when I actually advocate handcuffing a playerâs hands behind their back if they canât stop spinning their stupid top.

That needs a second look. While top can make some decks play smoother and is a very useful tool in Mayael the Anima and the like, itâs not too smooth to make you exceed your 1/x games won target. You wonât suddenly win every game because you have a stupid top to durdle with. The card is probably fine, provided you donât use it like a jackass. If you spin the top right before you need to use it and just reorder a few cards, itâs no worse than a Sylvan Library or Mirri's Guile. Those cards are fine. It all comes down to how you use top. Remember, use top when you should use top not when you could use top. Show a little more restraint than an infant in a high chair. Thatâs all Iâm asking. Iâm going to give a more nuanced view toward Senseiâs Top provided people donât make me regret it. That is all.

Return to your Regularly Scheduled Article

Top goes in Rashmi. If we can agree to use the top like civilized Ladies and Gentlemen, things will be fine. Besides, weâre going to be cheating SO HARD that they likely wonât even notice a few top spins when weâre spitting out value and drawing cards all day. Weâre about to cheat SO HARD and the best part is, weâre going to be relying a lot on random chance to get an advantage and thatâs very 75%. Forget auto-jamming Rashmi into our Maelstrom Wanderer deck and what that would look like, what is the deck going to look like with Rashmi at the helm? Pretty damn boss, thatâs how. Letâs take a peek.

This didnât start out as an elf deck, but the more I tinkered with it, the less and less sense it made to not run elf synergies. Thereâs a lot going on here so I want to run you through my thought processes.

Delve spells are very good in here. You can play a Temporal Trespass for

and trigger Rashmi for any card in the deck, which is useful to be sure. If youâre stacking the top of the deck like you should be, youâll benefit from playing a delve spell to play the top card for free. A lot of your delve spells can be recycled in this deck and that means Skullwinder, Eternal Witness, and Greenwarden of Murasa will do work. The delve spells are good to begin with so using them to always get a free spell is gravy. Play the ones that are instants on their turn when possible for maximum carnage.

I ran as many ways to untap your stuff on their turn and play spells on their turn as I reasonably could. Prophet of Kruphix really wants to go in this deck and itâs a shame it canât, but with Murkfiend Liege, Awakening, Vedalken Orrery and Leyline of Anticipation, we can approximate the effect. You want to try and play a spell every turn if you can and try to get a free elf out of it. Weâre going over the top with our Elves so putting x out a turn cycle where x is the number of players is out best way to swarm them. Weâre playing to our commanderâs strengths here.

Topdeck manipulation is key so I loaded up. Use the top responsibly â I donât want to regret changing my stance on it. Top is even better than scroll rack in some situations so make sure to fully load your topdeck so you can get Rashmi triggers and still benefit from Lurking Predators. Try and use Rashmi to draw through clumps of land if you have predators out. Either way, youâre getting a free spell and keeping a full grip most of the time, so have at it. Sylvan Library and Mirri's Guile are solid already. I even included Wordly Tutor and Long-Term Plans to help us with this strategy. I considered Crystal Ball to help us Scry land to the bottom, but I think since Rashmi helps us draw land and Burgeoning and Exploration help us get them out quickly, there is no real need. I like the idea of having a ton of land out, frankly.

Counterspells are obviously a great way to take advantage of being able to get free spells on their turn, but I cut down to the bare essentials. Since we may scoop to wrath effects which they may play pretty liberally if we get too far ahead, we may want to revisit the number of counterspells weâre jamming. We tend to prefer narrow or utility counterspells in these decks, but if you have to jam Negate to keep them from drawing 12 from a Decree of Pain the turn before you would have won, you do what you have to do.

All in all Rashmi looks very strong. Losing Prophet of Kruphix was a blow, but this takes the sting out of it for me. Between Leovold and Rashmi, this Simic player has a lot of building to do this month, and Iâm excited to have toys to play with. As a side note, the U/G Fast Land was spoiled in Japanese and Iâm not sure what the English name is so itâs not included in the deck but I am very excited to have access to it in the future as a Simic player. Iâm not sure if I will always include it but itâs better than Simic Guildgate so itâs worth considering.

What do we think? Do I need Craterhoof Behemoth? Was I mistaken in including Sensei's Divining Top? Any glaring omissions or questionable inclusions? Are you excited about a different card from the set? Leave it all in the comments section! Until next week, thanks for tuning in.