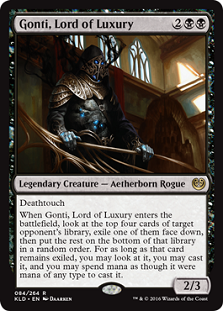 Last week we talked about Rashmi and how busted she is likely to be and I was sort of let-down after I finished it. I was super excited about that piece but the rest of the set wasnât giving me anything. I have literal 0 interest in Dwarves in cars getting coffee, so Depala is a no-go. I feel like Kambal would be just a bad Ayli, and while Iâm sure it gets slotted into the 99 of a ton of different decks, there doesnât feel to me like there is anything groundbreaking I will be able to do with him in this series. I would be building a deck that could easily be Ayli or Ghost Dad or any number of Orzhov commanders and have an identical deck. Itâs worth covering that once, I guess, but I think itâs been done. So with those three creatures being the extent of what we can brew with, I was sort of dreading having to come up with a topic for this week.

But wait! I checked the spoiler again and I had completely forgotten about a card I actually liked! Forgetting it was in the set, one unassuming un-mythic was lurking, ready to be exploited. Exploit! I could build a deck with lots of exploit creatures! **Looks at list of creatures with exploit** I could make a deck that bounces my commander! The card Iâm talking about is Gonti, Lord of Luxury, and bouncing/sacrificing and replaying him seems like a great way to get card advantage the most 75% way possible â stealing. I wanted to include some exploit stuff, but Black exploit cards are either terrible or Sidisi, Undead Vizier, and you know how I feel about face-down tutors. Granted, there is a high cost to re-buying Sidisi and replaying her and that card disadvantage may offset how busted it is to play a Demonic Tutor every turn. Iâll revisit her later. For now, I want to focus on making the most of Gontiâs ability, and once the deck is made, Sidisi will either slot in or it wonât. I donât think any other Black creature with exploit is good enough to make the cut, which sucks. I wish there were a creature stapled to a Sign in Blood or something so I could justify jamming it. Still, there are plenty of creatures like Grave Titan and the new monster, Noxious Gearhulk, that will also give us a ton of value in a deck where weâre trying to maximize the limited ways Black and artifact cards can let us rebuy ETB effects. I think this will be a lot of fun.

The way weâll get there is primarily going to be through reanimation. Sacrificing and bringing back our commander can get us those triggers and the new Command Zone rules make it so weâre not really risking much if they have ways to exile cards from our graveyard the way we may have been before the tuck rule update. Cards like Victimize and Nim Deathmantle are our bread and butter in a deck like this. That said, there is some non-zero amount of bounce afforded us. We can use Erratic Portal, for example. The stupid mana symbol on Crystal Shard is a real blowout here as weâd love access to that in this Mono-Black deck but, as Mick Jagger once said, summerâs here and the time is right for dancing in the street. He also said âyou canât always get what you wantâ and thatâs probably more relevant to this discussion.

We may not always get what we want, but if we want their spells, weâre going to get them. Weâre going to cast as many of their spells as we can and theyâre going to sit there and like it. In a lot of ways, there really isnât a way to NOT build this deck 75% if we build at all with the commander in mind because casting their spells is the perfect way to make sure the power level of our deck scales with the other decks at the table. Weâre not trying to deck anyone this way, but if we can get a bunch of juicy spells out of their deck, so be it. We can even run spells like Praetor's Grasp and Hedonists' Trove and what the hell, Enslave. Some of these spells can get expensive, but when you have 4 Sol Rings, who cares about how much spells cost?

So what would a deck built around Gonti look like?

Lifestyles of the Lich and Famous ? Commander | Jason Alt

I really like how this looks. We arenât a one-trick pony, but we have a lot of redundant ways to get card advantage that works best with our commander but which interfaces with the rest of the deck nicely. 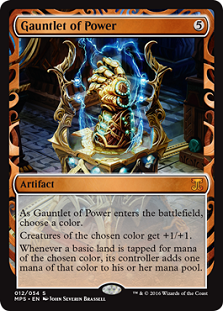 I normally sort of phone in the land section because payers will use the utility lands they have when they build and are pretty set in their ways. I also donât want to construct a manabase that costs like $1,000 and make it look like I advocate those sorts of mana bases in 75% decks. I skew toward basics and affordable dual lands like Sunpetal Grove, etc. However, for this deck I wanted to make sure we could make the mana we needed to make. Cabal Coffers and Urborg, Tomb of Yawgmoth are a necessity in this build. If you want to use Thespian's Stage to make more Coffers, that might be wise. We have Phyrexian Tower and other expensive lands, too, because this deck needs to run smoothly since itâs so mana-hungry. You might even jam some Snow-Covered Swamps and an Extraplanar Lens if Caged Sun and Gauntlet of Power arenât doing it for you. Gauntlet of Power is kind of pricey, but you may be able to pop one of these beauties in a booster come Kaladesh.

The creatures were fun to pick out. I wanted to maximize mana generated so I jammed our old friends Crypt Ghast and Nirkana Revenant right off the bat. These take a minute to get going, but so does setting up our commander and an advantage engine to get multiple activations in a turn. I also stacked a ton of good ETB effects, including new mythics Noxious Gearhulk and Demon of Dark Schemes, two cards that seem tailor-made to go in this deck. Killing them with Gray Merchant of Asphodel or wiping their board with Fleshbag Marauder, youâre going to have a ton of fun. Youâll have even more fun if you get Hell's Caretaker going and keep him alive. Throw an Umbral Mantle on and watch him wreak havoc. A creature with an ETB effect in play and one in the âyard plus a Caretaker can get out of control, fast. Thatâs not the only way to bring creatures back from the dead, and creatures ranging from Sheoldred, Whispering One to Puppeteer Clique are getting in on the action.

We have some standard removal spells and a few reanimation spells here. Weâre just trying to play Magic by removing their stuff and win Magic by bringing our stuff back. I didnât really run across anything game-breaking while researching instants and sorceries to go in the deck, although Living Death seems fun, here. The enchantments were more fun, though, and I got to include my standard Dictate of Erebos/Grave Pact shenanigans on top of some deck-specific stuff like Hedonist's Trove and No Rest for the Wicked, a card Iâm surprised I donât see used more.

The artifacts are the real heart and soul of the deck, in my opinion. You could really play around here and find cards that fit your particular play style. Skullclamp is going to draw a lot of cards and Mimic Vat is cool in a deck where we sac stuff, but I wish I had found more slots for cards to experiment with. We have a few altars for mana and sac outlets which are both vital, we have mana rocks, we have ways to untap our utility dorks and after that, we donât have much room. I jammed a few cards just for me such as Cloudstone Curio and Tawnos's Coffin but for the most part, the stuff just makes the deck work. I think weâll get quite a few re-buys of our commander and hopefully we have the mana to play their very best spells.

In my view, this is the best way for black to scale to their power level. Cast as many of their spells as you can and youâre bound to play stuff they can handle since youâre borrowing from their decks. If we play stuff they can deal with but still accumulate card advantage by having our own spells in reserve, we should win but not in a way that makes them feel like they never had a chance. Isnât that the goal with a 75% deck?

So what did I miss? Did I not include enough from Kaladesh for your liking? Did I miss something super obvious? Did I include a card Iâm not allowed to â I do that sometimes. I wanted to jam Crystal Shard so badly I almost did and hope no one noticed the Blue mana symbol. Would you have built a different way? Whatever the case may be, leave it in the comments section â I love when you do that. Until next week!