Last week, Wizards of the Coast released a picture to promote their new product, From the Vault: Transform. People were upset. 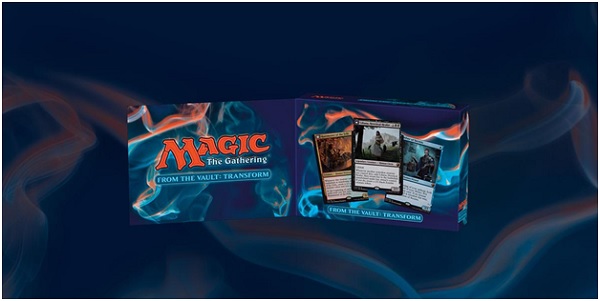 They werenât upset by what was in the picture, they were upset by what was not in the picture, namely Jace, Vryn's Prodigy. Jace, a card whose price was out of control due to its ubiquity in Tiny Leaders and Frontier, the two most popular formats on the planet. I have become convinced that Wizards released this pic of the FTV sans Jace because they wanted to see all of the dumb things we would say on Twitter and laugh at us. Thatâs what I would have done, anyway. Hats off to you, Wizards â it was a pretty good joke. Whatâs not a joke is the sexy new art on Huntmaster of the Fells (I wish this were Legendary now that itâs out of Standard where I would have complained a lot if it had been Legendary) and Delver of Secrets among other cards. It has been revealed that Jace is, in fact, in the set after all, because of course he is, and all of the silly things people were tweeting (even me) seem funny in retrospect. They got us good and the sense of relief that washed over people when it was revealed that theyâre not actually terrible at putting together an FTV was palpable.

J,VP (as he likes to be called) is in the set and heâs ready to do some work and maybe even see a reduction in his price, which is good for everyone. Jaceâs (surprise?) inclusion in the FTV got me thinking about Jace and, more importantly, about the second ability on his Planeswalker side. What if I didnât use him for recurring cantrips and card draw spells, what if you were re-buying Bribery and Blatant Thievery? Is this pretty similar to what I was doing last week? Yeah, it is. Thatâs basically a coincidence more than anything because I could have written last weekâs article whenever but this was inspired by Jace. Besides, I never built a J,VP deck because he just seemed soâ.â.â.â spikey? Try-hardy? It wasnât really my scene and this new take on a possible build, partially inspired by what I did last week, yes, makes me excited. How would you build a 75% version of a deck that is so often built as a Baral, Chief of Compliance deck by another name?

I see a lot of people starting to build what they call âJace tribalâ which looks like fun since apparently it makes sense flavor-wise to have 8 Jaces on the board at once as long as they donât have identical names. I donât agree with the decision from a flavor perspective; but, flavor has never mattered more to me than potential, and the potential to fill the board with different Jaces and doing big Blue stuff all day appeals to me. Iâm not building that today and Iâm not sure thatâs even 75% (though itâs probably pretty potent) but the prevalence of it does us one big favor in that it mitigates The Rafiq Problem for us a little bit. I used to assume someone with Jace in the Command Zone was a tryhard; but, now Iâm not sure and that ambiguity means people will give us a fair shake with our build, we hope.

What would make our build different? I want to use Jace to his full potential. To me, that means keeping him alive, drawing some extra cards and then re-buying our big spells. Weâll play a few more small, cantrippy-type spells than normal, but you know me, Iâd rather play a Mystic Remora and not pay for it than play a Preordain in Commander, so even the âtypicalâ Jace fare wonât be so typical after all. We arenât in a huge hurry to flip Jace, so there isnât a huge race to fill the graveyard. Instead, I want to slowroll a bit, getting Jace going mid-game when the yard will always have enough cards to flip him and then, once flipped, weâll have lots of choices. While weâre at it, letâs really commit to re-buying spells and play cards like Archaeomancer and Torrential Gearhulk. Playing Part the Waterveil is cool, but playing that same copy two more times in a game is even cooler. I am even going to give the new Ixalan Planeswalker pack Jace, Jace, Ingenious Mind-Mage (I punctuated that correctly grammar-wise but that sure is confusing) a spin because who doesnât want to gain control of a ton of creatures. Weâre going to be a mid-range style deck and our role will be keeping people in line. River's Rebuke isnât such a bad version of Cyclonic Rift when we play it three times in a game, now is it? Thereâs something to be said for taking our time and making sure everyone else takes their time, too. How do we go about it?

Itâs a little slower than the typical Jace build but I think if we can keep them off our backs and develop a bit, we can do some big things with re-buying spells. Here are some directions you can take this build.

I didnât keep any infinite mana combos but there are a few possible. One involves Paradox Engine shenanigans with buyback spells. If you like that, add Whispers of the Muse and Engine and keep the mana rocks coming. You can also add Dramatic Reversal and Isochron Scepter (a good card but one I cut when I took out a lot of the cheaper spells) if you want infinite mana, Palinchron is always a card. I find that usually leads to me trying to draw my whole deck with Sphinx's Tutelage or Blue Sun's Zenith and trying to win with Laboratory Maniac. Snooze. If you like that, weâre like 6 cards away from that capability.

Loops are more fun to me than infinite combos since youâre mana-limited and getting advantage rather than ending the game (or worse, NOT ending the game); so, you can add Equilibrium and Cloudstone Curio if you find more creatures to add. We have a lot of Archaeomancer variants, and playing something like Bribery or Talent of the Telepath every turn seems like a lot of fun. Cut some mana rocks for creatures and the Curio package. I usually like to add stuff like that but I was having too much fun scrapping the normal sorceries and adding different ones.

I cut a lot of cantrips so I added a lot of lands that will end up in the graveyard. Lands are always good to pitch to Jace; and, if we can get our spells back, why not our lands, too? I like Crucible of Worlds here, especially with Dust Bowl. If you donât like the package, cut it for another one, like the Curio package, but I like it and I like cycling a land early to flip Jace then hitting it as my sixth land drop or so to make sure I keep curving.

What Blue deck would be complete without Vedalken Shackles and Extraplanar Lens? I think playing a ton of basics is generally good and these cards reward you for doing it, so why not? I donât think you ever cut this, but you can if you want room for something else.

Use your countermagic to keep them from winning, basically. I didnât include that many and you can feel free to add more, especially ones like Disallow or other modal counters. I like Desertion as a modal counter since itâs a small Gather Specimens or a âYou actually donât winâ spell, which is super 75%. Add more counters if you need to, but why would you need to? We just want Jace kept alive for a few turns but he can die a few times so really, youâre just trying to keep them from doing something catastrophic.

How did I do? Would you ever sleeve a pile like this? Do you have a Jace, Veep deck and have some insights to share with the class? Did I forget something obvious? Include something questionable? Leave it in the comments section. Donât forget to like and share this on social media. Thanks for reading. Until next time!