As a Magic financier, I've long maintained that other Magic financiers should build Commander decks like Tony Stark built his Iron Man suit in that cave: out of a box of scraps. I have managed to maintain close to a dozen Commander decks, and I have a few ideas for new ones sketched out simply because I tend to use my Commander decks as a place to stash "awkward" cards that take a long time to move. What do you do with a Spanish Mirri's Guile? Jam it in your Mayael the Anima deck until you find a buyer, and then replace it with a real one if you can find it in trade or with a different card if you can't. Seems pretty simple. Foreign cards sell pretty slowly on eBay, and you can't even list them on TCGplayer, so if you end up acquiring a lot of foreign cards, as we who buy collections always seem to, you're going to accumulate stuff.

Recently, I managed to convince Gathering Magic finance writer and Brainstorm Brewery castmate Ryan Bushard to stop borrowing my Commander decks and just build one of his own. I knew he had the same box of "scraps" I had, and a Commander deck would be the perfect place to stash them. Once I told him that there was a perfect deck for his favorite card, SÃ©ance, he was sold. One by one, the dominoes are falling, and Ryan became the third member of Brainstorm Brewery to get into Commander.

Make no mistakeâRyan had some decent scraps. Even though foreign stuff sometimes takes some work to get out of, it's always worth picking up, especially at the right price. Sure, it takes a while to find "that guy" who is willing to pay your asking price on a Japanese foil Caged Sun, but once you find "that guy," you can make a very decent margin over what you paid. But what to do with said Caged Sun? Should you jam it in a box or jam it in a deck? As long as you're double-sleeving and not shuffling like a lunatic, you won't damage the cards, and you may as well get some use out of them. I was at Ryan's house recently, and he showed me some of the stuff he pulled out to potentially make a rough draft of the deck, and he asked me to see if there was a 75% deck in there he could put together without having to buy too many cards to finish. Let's take a look at the scraps that may make the deck. Let's build Trostani, Selesnya's Voice. 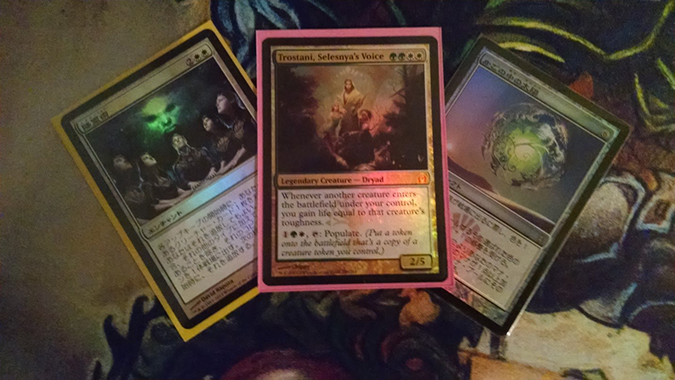 A Japanese foil Trostani is obviously sexier, but we're not buying cards here. The scraps he had are shown here, and that's what we're building with. The Japanese foil SÃ©ance is hot, and the Caged Sun would look good in any deck. I don't even know if Caged Sun makes the final cut, but I don't care because I just like looking at it. 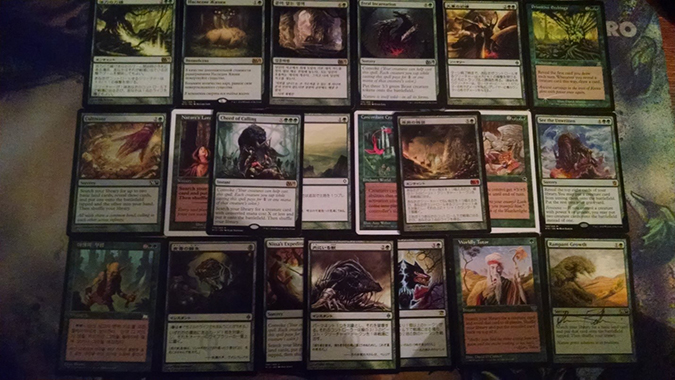 A lot of this stuff looks pretty standard. Sure, not all of this is making the cut, but Ryan has never built a Commander deck before. I really like Primeval Bounty and Parallel Lives in a deck like this, and the green ramp and mana-fixing is solid. Chord of Calling is a card I like since it's a face-up tutor. We may even end up playing a card like Overrun depending on how many token-makers we can make without resorting to durdlage. All of the Asian-language stuff here is pretty hot. 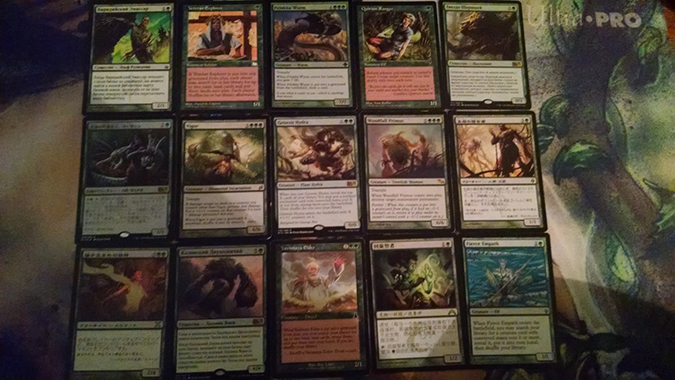 There are some solid cards in this pile. Will a Doubling Season effect make cards like Gyre Sage and Yisan, the Wanderer Bard worth it or will we end up cutting them in the end? Either way, there is solid utility here. 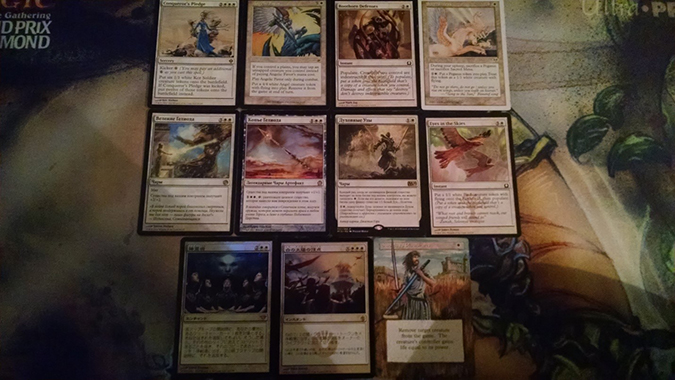 Some people are beginning to prefer Russian to Japanese because of the relative rarity, and the fact that Russian boxes of newer sets are going roughly for the same prices as English boxes attracts people. Once they see what the foil rare is, if it paid for the box the way a Russian foil Polluted Delta can, people are amenable to selling the rest of the box for cheap. Not sure the Dictate of Heliod makes the final cutâor Eyes in the Skiesâbut the token-producers, and that SÃ©ance, are shoo-ins. That altered Swords to Plowshares will eventually find a buyer, but in the meantime, it can do some work for us. 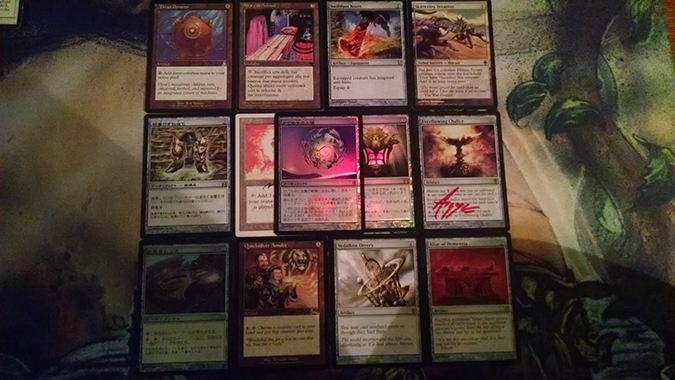 There is some real hotness here mixed in with a white-bordered Sol Ring. We will have colorless mana for days if all of this makes the cut. Ryan has a few big fatties, but the Quicksilver Amulet may end up on the cutting-room floor if we can't find a few more. The Japanese foil Chromatic Lantern practically costs more than my Nath of the Gilt-Leaf deck, and that makes me chuckle. It will find a home someday, but until then, Ryan will look like a baller, and he can tap his lands like a Mental Magic player in style. 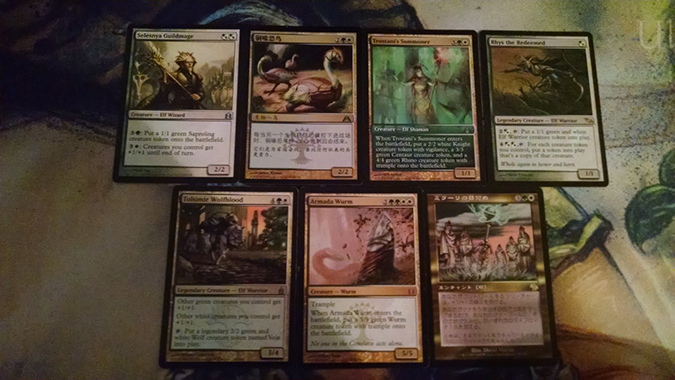 Rhys the Redeemed and Tolsimir Wolfblood are fine commanders in their own right, and they would do fine in the deck. Armada Wurm is a snap-keep in a Trostani deck. I even like Trostani's Summoner, especially with Trostani out. We used to run the Summoner out of the board when we ran SÃ©ance in Standard, and if you can put a Summoner into play somehow with Trostani out, it gets dirty fast. That Mirari's Wake is pretty hot! Selesnya Guildmage is probably eschewed in favor of Vitu-Ghazi Guildmage, and the Bronzebeak Moa is just cartoonish and probably in the pile because it's Chinese and Ryan liked the card in Limited. Some rough drafts are rougher than others. 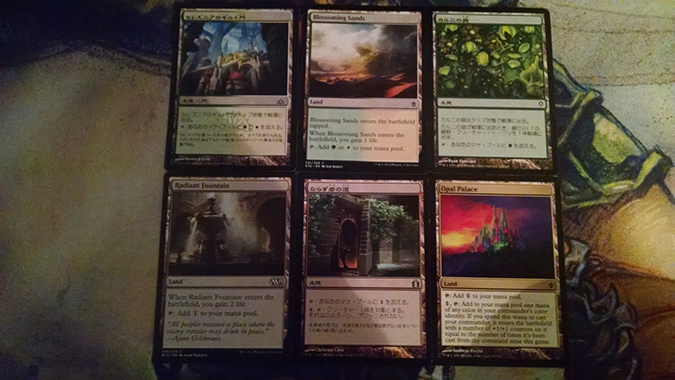 These are lands that any Magic financier has a stack of on every flat surface of his or her house. I don't know how much I like the Fountain. That's not true. I know how much I don't like it in a two-colored deck.

There is a deck hereânot a great one, but a deck. Most of my early decks were built this way: cobbled together from stuff in my trade stock and store inventory. Once a rough deck was hewn together, I worked on trading for the stuff I wanted, but this is a great way to accomplish one of the main goals of a 75% deck: Start with a weak deck, and make it stronger until strengthening it more would make us win more than 1 Ã· X games. You can make this deck quite a bit better, but to start with, we have ninety-nine cards to work with, and how it plays will help us figure out where we want to end up.

Ryan is going to be tuning this deck for quite a while and trading for what he needs. In the service of having something you'll want to actually play, let's skip ahead a bit to the point where Ryan has put his scraps deck together, has cut some of the bad cards, and has traded for some good stuff. What's a good 75% build for him to shoot for?

Are we done? No, I don't think a 75% deck is every truly done. By the time you get it in that sweet spot at which point you're not losing or winning too much, a few months have gone by, and they've printed new cards.

But I think we're close to a decent deck. I added a few cards, but nothing expensive, and I tried to keep the core of the stuff Ryan pulled intact so we would have a smooth transition from his box of scraps to a serviceable deck, giving him a clear path of what to pick up in trades or yank out of his own trade binders. If he wants to go big and go after cards like Doubling Season, that's fine, but since his goal is not to spend money on the deck but rather pick things up incidentally, unless a Doubling Season somehow falls into his lap, it's unlikely. And that's not a bad way to build a 75% deck. Like I said, mine started this way: a box of scraps, an unwillingness to pay cash for cards I wanted, and the creativity to tune the deck up with new acquisitions. Since one of the cardinal rules of 75% deck-building is to start with a weaker deck and strengthen it, starting with the cards you have and not the cards you want and building toward the deck of your dreams is a good strategy. It helps you shrink the card pool in the same way building along thematic lines does. This time, you're limited by your inventory and not your imagination.

If Ryan tunes the deck up and we jam a few games, expect an update. Trostani coupled with SÃ©ance is something we both really like, and it's going to cause a lot of sick plays. I'd like to find room for Rhox Faithmender if I were the one building the deck, and I might try to rely less on SÃ©ance than even this deck does because we want ways to make tokens other than that. Phyrexian Processor, especially in a deck with which you gain a lot of life, is another possibility. There are a lot of things we could add, but it's important that we start with a weak deck and make it better. Making a few tweaks to turn a box of scraps into a 75% killing machine is about as rewarding as it gets.