Welcome back, Lore Seekers, to my third Elder Dragon article in as many years. Things sure were different back when I wrote Elders of Dominaria and Elders of the Multiverse. How was I to know just a few months later we'd get an elder demon card type, or get a new cycle of elder dragons just a few months after that? Or that we'd see Ugin, the Spirit Dragon's dramatic origin? Now, three years later, we've also seen elder giants and a third cycle of elder dragons, so I thought it was time to revisit the topic! 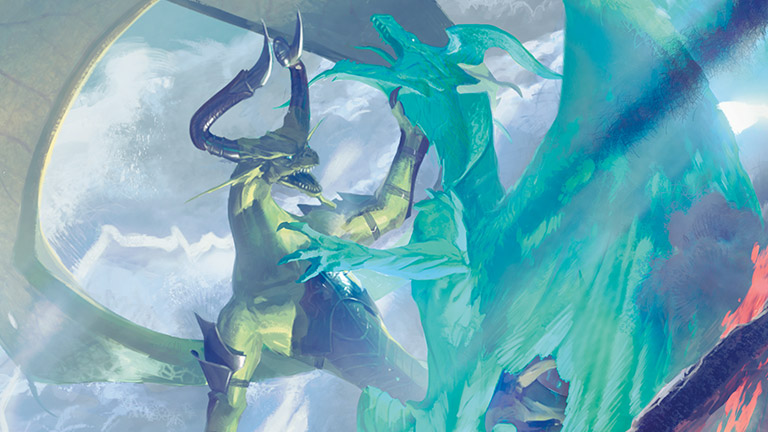 Crux of Fate by Michael Komarck

Everything I said about in Elders of Dominaria continues to be true, but we did learn about quite a few previously unknown elder dragons in the Chronicle of Bolas, as well as get more information about the Elder Dragon War. We've long suspected that Nicol Bolas had a hand in ending the other elder dragons, and it turns out that was indeed the case! We also learned that Ugin and Bolas are twins, and that the elder dragons of Dominaria were born of The Ur-Dragon's touch on Dominaria.

Here are the core elder dragon brood of the plane, the main survivors of the Elder Dragon War, of whom only the twins remain:

Merrevia Sal is killed while the elders are still getting their bearings, something that impacts Nicol and his brother Ugin deeply. Then we have the 'cousins', Vaevictis Asmadi and his brood, of which Vaevictis is the only survivor:

And finally, we have the seventh survivor of the Elder Dragon war, Chromium's mate Piru, who was killed by the Blackblade. This fact led the Gatewatch to the blade as a way of defeating Bolas, but of course Bolas had seeded the tale of the blade himself to trick them.

There was a lot of fan debate over the years whether or not Piru was a 'true' elder dragon or a 'lesser' elder (a differentiation made up almost entirely by fans), but as Piru is referenced exclusively as an elder dragon in modern material, I'm officially closing the door on that fanon debate. 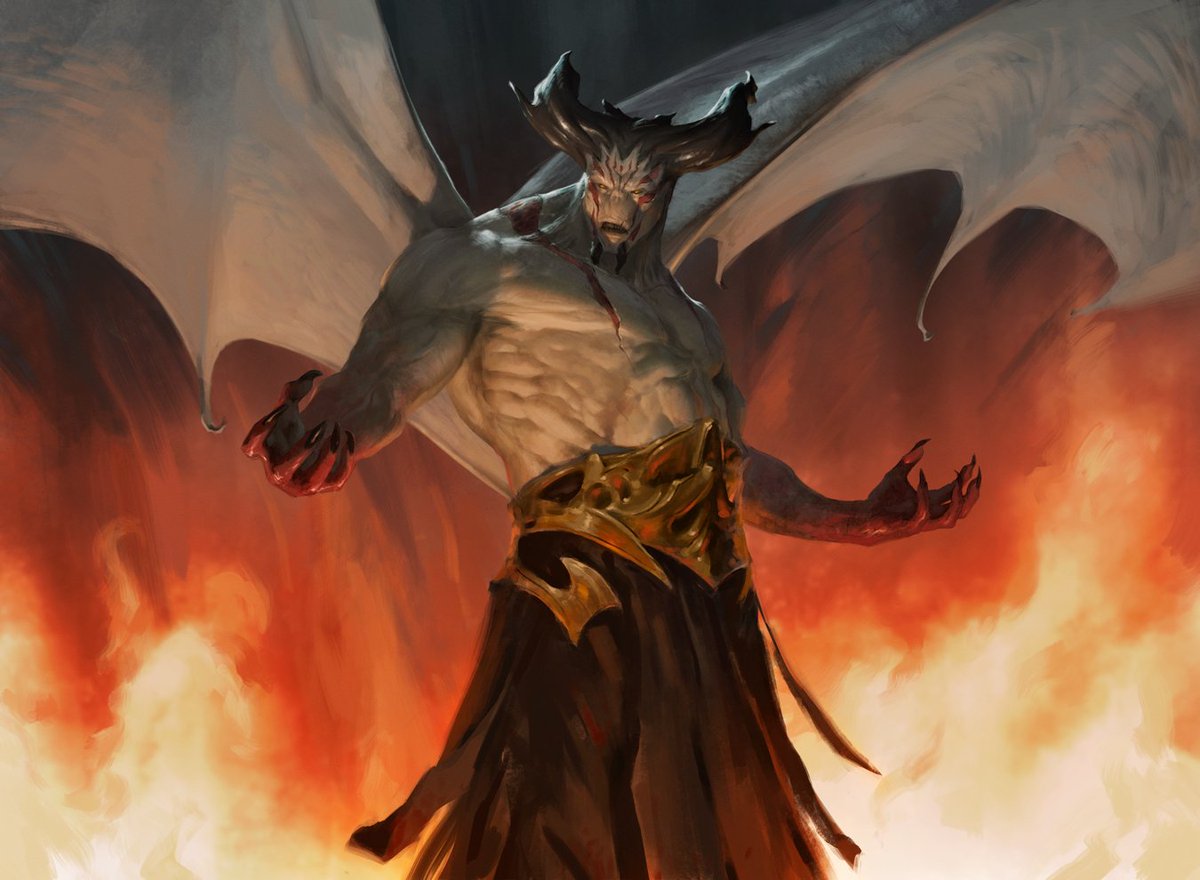 Of course, Dominaria introduced us to Belzenlok a demon who was part of an epic war in Dominaria's mythohistory, the War in the Abyss. We don't know much about the war, other than it's vaguely referenced off-hand in an old anthology novel and involved the demons and angels of the plane. Belzenlok was sealed away there for almost the entirety of Dominaria's history, so when the Cabal resurrected him, he set about 'correcting' history to include him.

Although it might just be for flavor, the Dominaria art book also mentions that Belzenlok himself trained Kuberr, the evil wizard-turned-god that founded the Cabal in the first place. 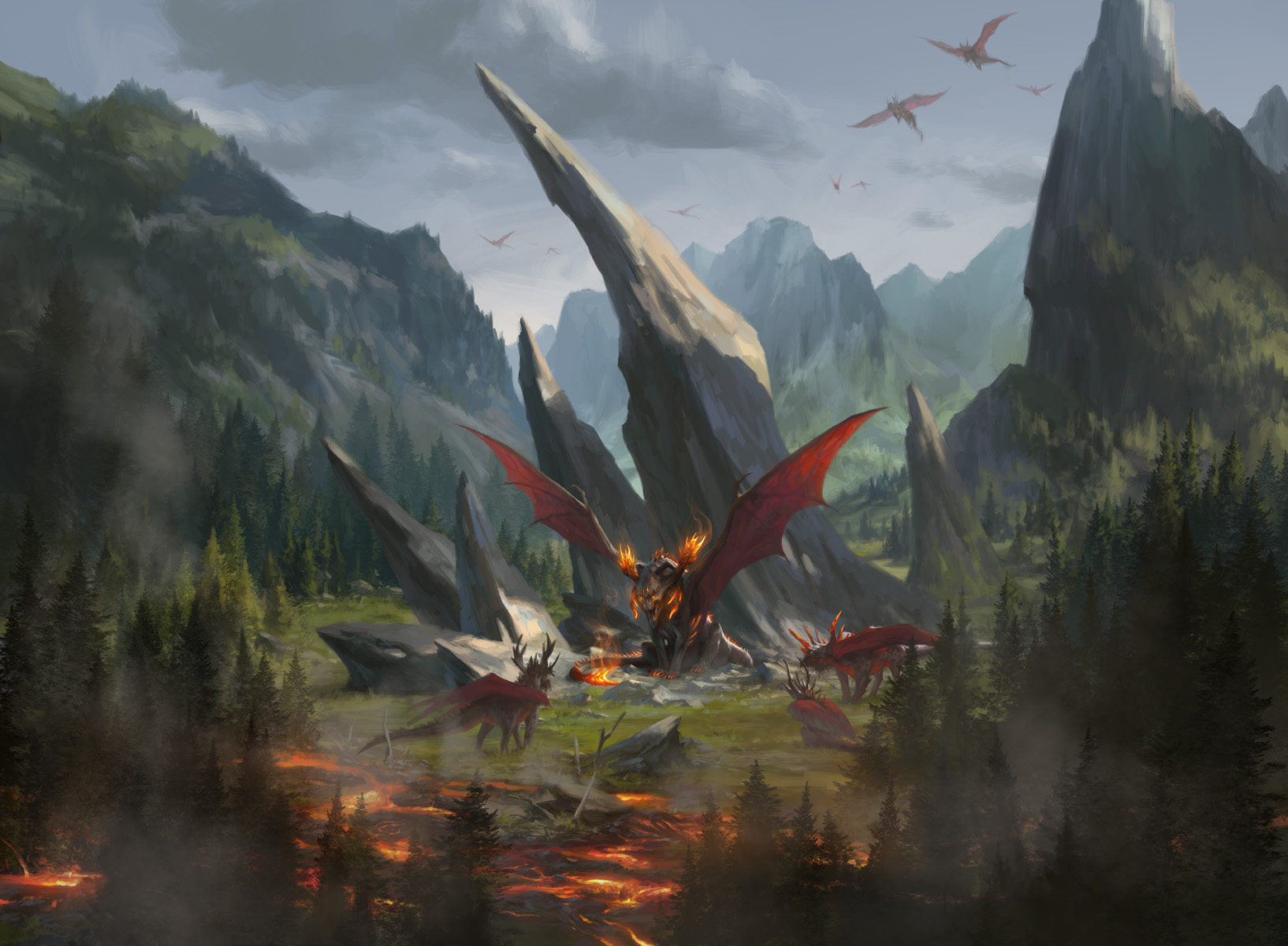 There's not a ton to say about the elder dragons of Tarkir that I didn't say in Elders of the Multiverse, but there's a newer twist! With Ugin now confirmed as a Dominarian elder dragon, how exactly we classify the elder dragons of Tarkir gets a new wrinkle. If they're born from a Dominarian elder dragon, does that technically make them 'lesser elders' like that old debate I mentioned above? Ultimately, I don't think it matters, as the elder type can and should be used as a title to reference the most ancient and powerful members of a primal race of beings.

It's a flavor win to jump between the past and present and slap the elder title on those dragons we once saw as younglings, now all grown up and masters of their domain. Here are the five in their in two incarnations:

Back in Elders of the Multiverse, I distilled the comments from several members of the creative team into one cohesive 'rule set' for elders: 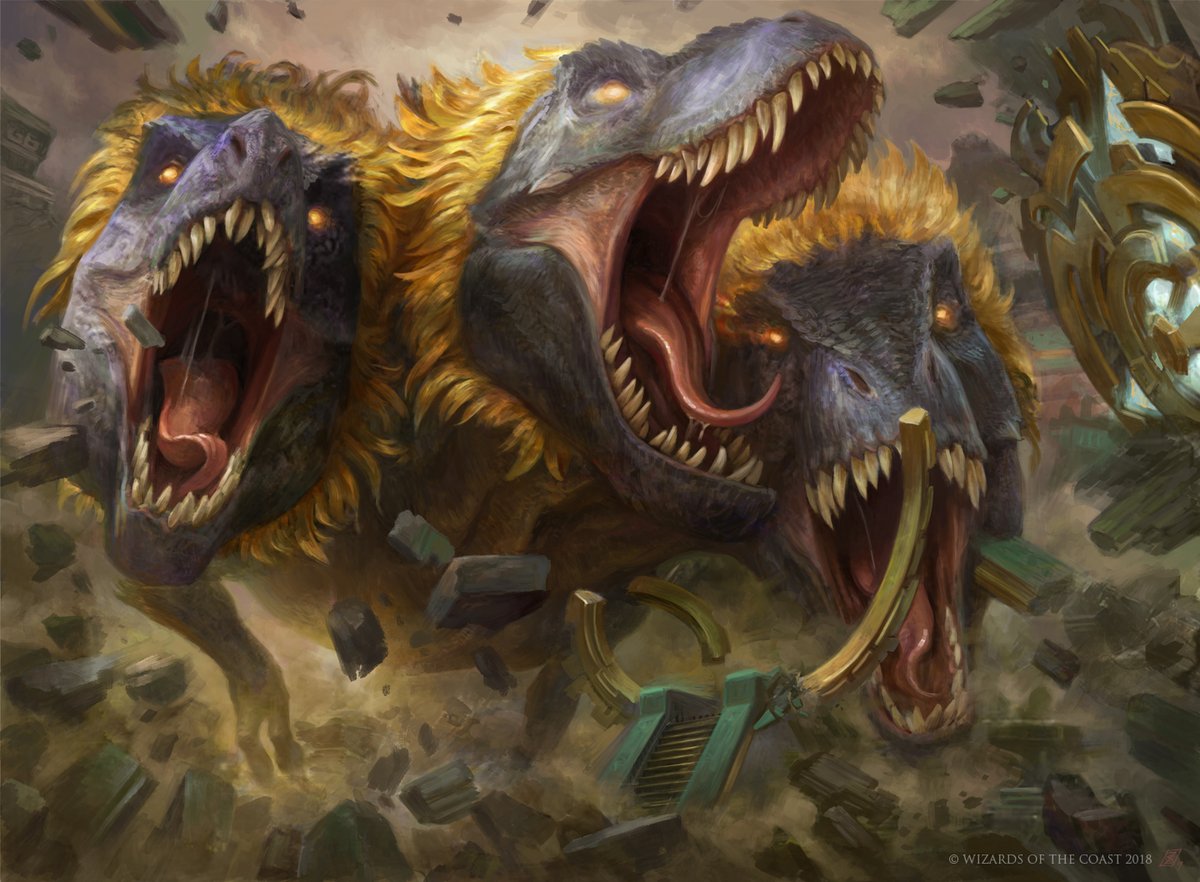 Shake the Foundations by Zack Stella

That brings us to the Elders of Ixalan, which at the time were the brand-new, shiny elders. They're still my favorite among the elder creature type, but there's honestly nothing new for me to say about them since we haven't revisited Ixalan yet in a meaningful way. That said, I'd love to see new takes on these six, or even new elder dinosaurs in the future.

The most fun part about these elders is how they broke the color cycle. By giving us an uneven six, they opened the door to fun, future elders that don't need to be paired in a cycle of five colors. 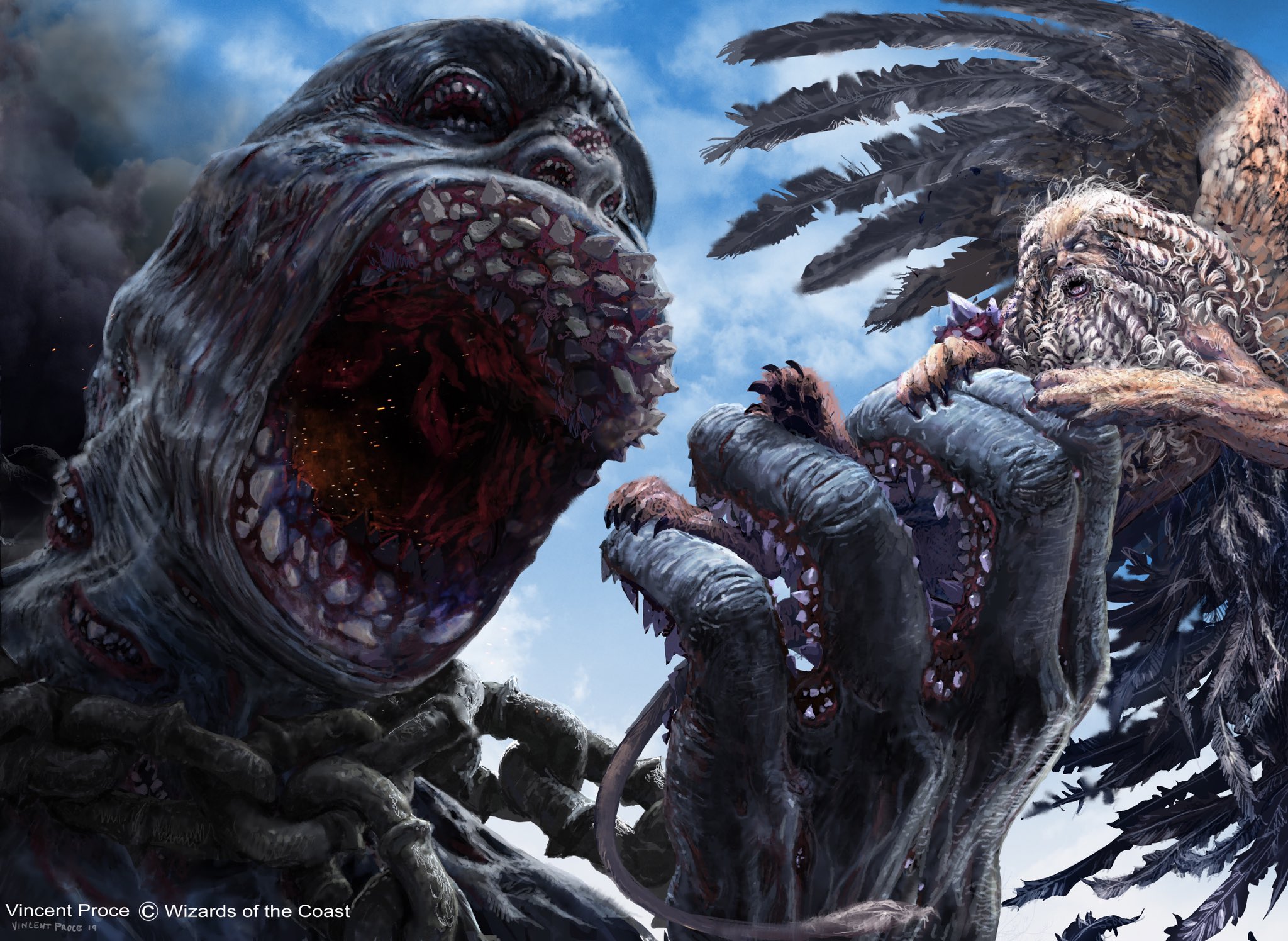 Eat to Extinction by Vincent Proce

It would be a few years before we saw new creatures with the elder subtype again, but when we got them, boy did they deliver. The origins of the elder giants of Theros comes from an interesting flavor problem: they'd already named the regular giants of the plane 'titans', so how do they interpret the classic greek titans of myth? The solution was a pretty simple application of the elder type, but one that I think worked wonders for the flavor of these cards (and the two other named titans from Mythic Odysseys of Theros):

These elder giants were created through the same magical process as the gods, except they represented mankind's primal fears in the ancient past. It was the fear of these beings that eventually brought the earliest gods into being: Kruphix, God of Horizons and Klothys, God of Destiny. They were sealed away in the Underworld with Klothys, depicted in The Binding of the Titans until Theros: Beyond Death, upon which they were loosed from their prison.

Most interestingly, however, is how the elder giants aren't enchantments like the gods were later, but instead 'true' creatures. That's a metaphysical pondering for another day, though.

All that said, do they meet the previously established criteria for the elder type? Let's see!

Yes! They're the original titans of the plane, ancient and powerful.

I don't believe this is spelled out, but as the forerunners of the titans, the answer would probably be yes.

They definitely embody the primal essence of the titans, they're almost elemental forces of nature! 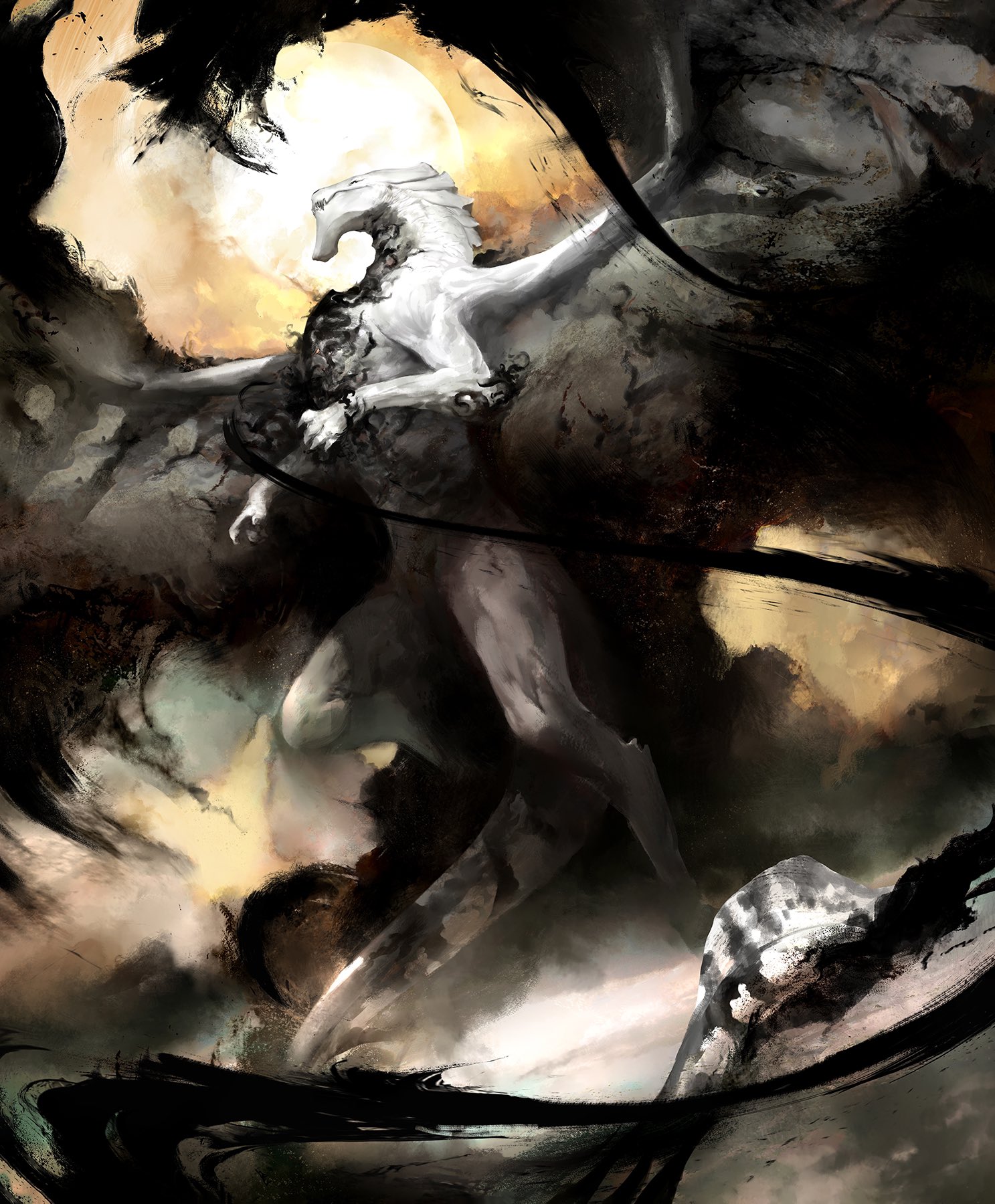 And finally we're caught up with 2021, and the new elder dragons of Arcavios (the plane on which Strixhaven resides)! The first elder dragons to not be connected to the original elder dragons in some way, we only see these five in their current form, so it's unclear if the elder type was inherent or earned in the way it was for the Tarkir elder dragons.

What we do know is that they were born from the snarls, the strange confluences of enemy-colored mana formed at the birth of Arcavios, when two planes merged but their mana didn't line up quite right. In a way, that makes them similar to the Dominarian elder dragons, who were seemingly born of pure mana or aether at the dawn of the world. But I appreciate them being largely unique and independent.

These five elders, unlike others we've seen, have no desire to rule the lesser beings of the plane. Instead, they founded the magical university of Strixhaven to end the age of war and bloodshed. I don't think this makes them necessarily benevolent, but certainly a heck of a lot less antagonistic that most elders we've seen in the past.

From a color cycle standpoint, as much as I enjoy being able to get one-off elders, I do appreciate having three complete color cycles of elder dragons now. Now we just need to find the wedge-aligned elders!

Now, let's discuss whether they meet the previously established criteria for the elder type.

Yes! While we don't see much in the way of other dragons on the plane, they're beings born at the dawn of the plane.

Because we don't see much in the way of other dragons, this is hard to say. It's certainly possible, it hasn't been ruled out in any way. But there's also nothing to differentiate a Galazeth Prismar from a Niv-Mizzet, the Firemind, as they're both ancient powerful dragons who oversee an organization of lesser beings. Not to reignite the Niv-Mizzet debate, that ship sailed with Niv became a five-color avatar of the Guildpact.

They're definitely powerful, ancient dragons, but given the limited scope of Strixhaven, it's hard to say for certain how much they embody the primal essence. The Founder Dragons were not the focus of the set this time around, so their lore is limited. We don't even know all of their genders yet!

I've talked in the past about how the 'elder' type is essentially a flavor tool (there's no mechanical benefit to such a limited type) to give extra oomph to creatures. I'm perfectly fine with that, especially in an era where the typing gets to mean different things metaphysically on different planes. Ultimately, I'm just happy to see new elders again!

That's All For Now, Folks

It's going to be a very busy summer for me folks. Combine that with the summer set being about The Forgotten Realms from Dungeons & Dragons, a property I'm familiar with but by no means an expert on, means my articles will be fairly sporadic until the fall. But not to worry, by the time Innistrad looms on the horizon, I'll be back to inundating you with lore content!