Welcome back, Lore Seekers! Last week I covered the humans, undead, and angels of Innistrad. Today I'm going to cover the demons and assorted monsters and fiends of the plane! I don't want to waste too many more words on an intro, so let's dive in!

Demons on Innistrad are hard to kill. Avacyn decreed that they be bound, as when a demon is destroyed, they'll eventually reform and be reborn. Note that "dead" here only means they're currently destroyed and have not yet been reformed, at least not as themselves. It's not entirely clear if demons are reincarnated or their essence merely becomes a new demon. 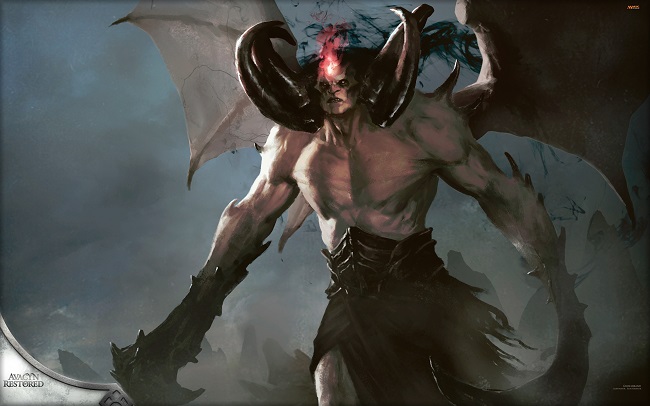 Griselbrand was the big bad of the original Innistrad, although he didn't appear in anything other than summary articles. As the biggest, baddest demon on the surface of the plane, Griselbrand was the leader of the Skirsdag cult, demonic worshippers who have infiltrated the highest levels of the Church of Avacyn. In a battle with Avacyn, rather than be imprisoned in the [Helvault], Griselbrand forced Avacyn to seal herself inside the Helvault. His end came after being freed from the Helvault, as Liliana Vess had come to cross him off her creditor list.

References: The Saint, the Geist, and the Angel

The ancient demon Withengar was sealed inside Elbrus, the Binding Blade in ancient times. The demon's cultists tricked (the still living)Geist of Saint Traft into accidentally freeing the demon. Once freed, he killed Traft (hence, 'Geist of ') but was himself destroyed by Traft's guardian angel.

References: Under the Silver Moon, The Lunarch Inquisition

When Griselbrand kicked the bucket, there was a power vacuum in the Skirsdag cult. Ormendahl, who had been trapped in the Helvault, was the most powerful demon to survive the church's purges after the destruction of the Helvault. He has since taken over the Skirsdag Cult, and even has the highest levels of clergy, including Bishop Jerren, working for him.

Vampires on Innistrad are dominated by four main houses: Markov, Voldaren, Faleknrath, and Stromkirk. There are also a number of minor houses, all stemming from Edgar Markov's creation of vampires and bestowing that gift upon his friends and allies. 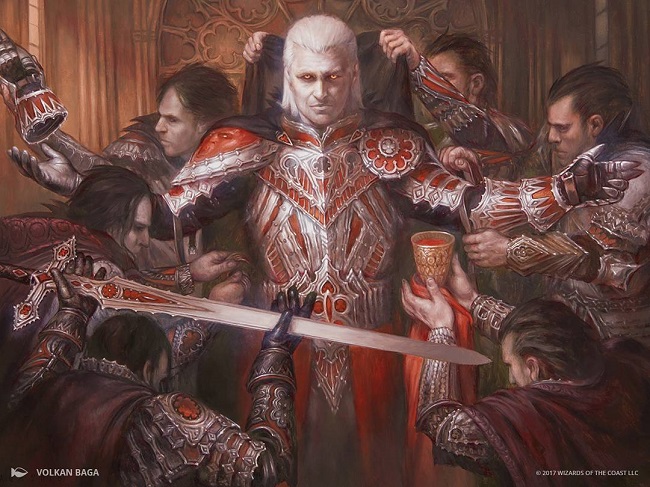 Status: Unknown, Implied to be Dead

Millennia ago, Edgar Markov created vampirism on Innistrad at the prompting of the demon Shilgengar. During a famine, he performed a ritual that turned himself, his family, and his closest allies into vampires, allowing them to survive by feeding on people as the crops failed. We haven't seen or heard of Edgar in recent years, and with the destruction of Markov Manor, his fate is unclear. 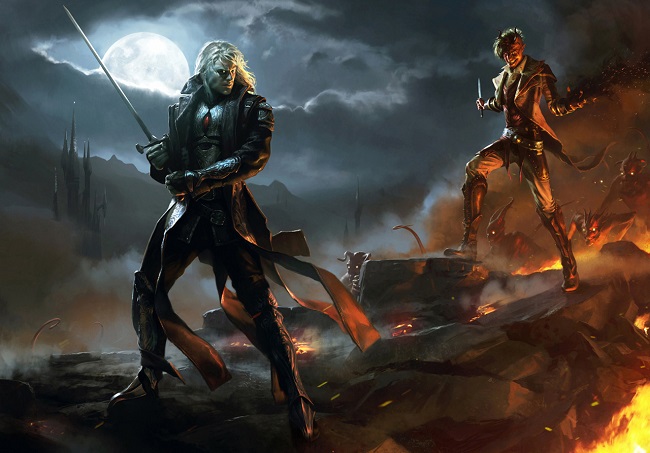 One of the first of Innistrad's vampires, the planeswalker Sorin Markov is central to Innistrad's story. The creator of both Avacyn, Angel of Hope and the Helvault, Sorin shaped the last thousand years of Innistrad's history to best serve his desire to put a check on the wanton appetites of his fellow vampires. His mentorship of Nahiri, the Lithomancer turned ugly when he failed to live up to his side of an agreement to watch over the Eldrazi prison on Innistrad, resulting in Nahiri being sealed in the Helvault. Upon her release, and seeing the Eldrazi loose on Zendikar, she lured Emrakul to the plane and imprisoned Sorin in stone to witness the end of his world. Emrakul was stopped, however, and Sorin worked his way free of the prison. The two put their differences aside after a vicious duel on Ravnica during the War of the Spark. Sorin is not popular among Innistrad's vampires for creating Avacyn, although he is feared and respected.

Anje Falkenrath is a flavor text character who more recently received a card in a Commander product. Although the Falkenrath progenitor is long dead, Anje seeks to reunite the fractured house and reclaim their ancestral manor, which has been taken over by Avacynian Monks. 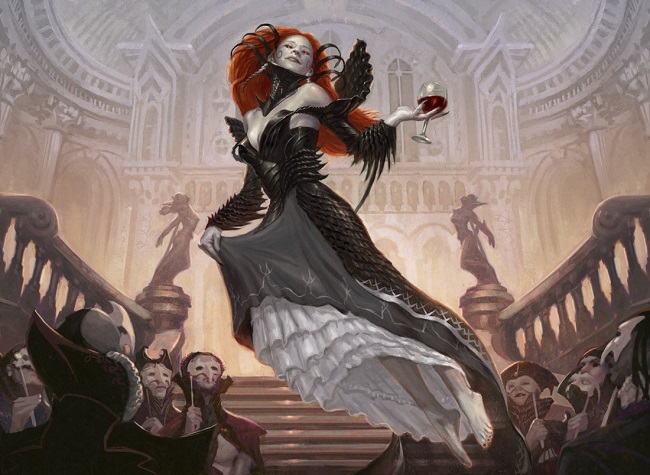 One of the founders of the four major houses, Olivia is poised to become the most powerful vampire lord on Innistrad. Although she is often thought of as a bon vivant, her elegant parties are often a cover for political maneuvering. Olivia led the vampires against Nahiri and the Eldrazi, although she happily left Sorin stuck in the Lithomancer's prison to better secure her own position among the vampire hierarchy.

Jeleva is a vampire of the Stromkirk line, although she has left her lineage behind her. On her far-flung estate in Nephalia, she uses her telepathic powers to hunt and torture her victims.

Werewolves on Innistrad are organized into howlpacks, although the effects of Emrakul's coming on the plane has decimated their ranks, and it's not yet clear which howlpacks survived and what new ones may have formed. 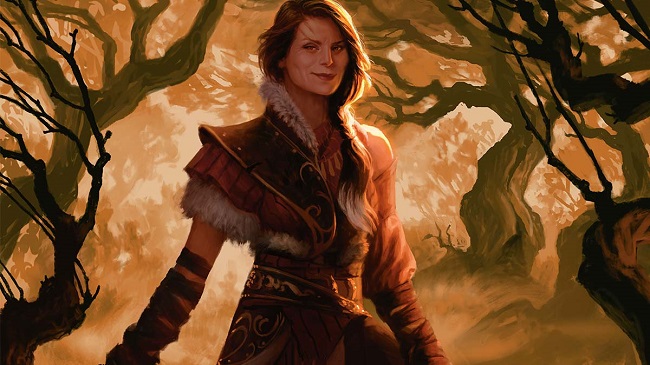 References: Under the Silver Moon, The Archmage of Goldnight, War of the Spark, Creative Text References, Art References

Arlinn Kord was once an archmage of the Church of Avacyn until her lycanthropic secret was revealed. Her spark ignited, and on other planes she found she could control her werewolf form, eventually learning to shift into werewolf form at will. She supported the Church's fight against the Eldrazi, despite their animosity toward her, and was also an ally of the Gatewatch during the War of the Spark.

Cards: Ulrich of the Krallenhorde

Ulrich is the leader of the Krallendhorde Howlpack, who runs with his pack even in human form. There's not a ton else to say about the legend.

Outside of the tribal-based monsters of Innistrad, there exist a large number of unique and terrifying creatures that are the subject of cults and legends.

The Town of Hanweir was once one of Innistrad's biggest trading hubs. With the coming of the Eldrazi, the villagers were driven mad and grew closer and closer until the town itself became a single being that simply... walked away.

Unfortunately, there's no lore about Ishkanah. She's a giant spider.

Everyone's favorite failson, Tibalt largely exists as the butt of jokes for his terrible original two-mana planeswalker card. A cruel sadist with telepathic abilities, Tibalt drew the attention of local cathars. When he was about to be apprehended, he cast a desperate spell that fused him with devils and ignited his planeswalker spark. He's spent his time tormenting the multiverse ever since.

That's it for this week - I'll be back after previews with the flavor gems of Innistrad: Midnight Hunt!