Welcome back, Loreseekers! Today I'm... uh... well I'm going to attempt a flavor gems article of Dominaria United, but there is SO MUCH flavor that it's hard to just pick the handful out like I usually do! I don't even have time to talk about the cool character team-ups in stuff like [Heroic Charge] and [Join Forces] in this set. Rather than wasting time on an ambling preamble... let's dive in!

Argivian Cavalier is Magic's first in-universe Mono-White orc (there have been some for D&D, but none canon to Magic before. New Argive is a nation on Terisiare, the continent where the Brothers War happened millennia ago, and whose other notable landmass features the sentient forest of Yavimaya. This Argive has opened its borders to all in the spirit of unity, which is why you'll find kor displaced from the demi-plane of Rath during the first Phyrexian Invasion here, as well as the very orcs that the Argivian's ancestors once warred with.

Clockwork Drawbridge is one of our only glimpses at the city of Argivia, the capital of New Argive. The entire city is an elaborate artifact that can retract into a fortress when under attack, and this drawbridge is part of that.

Charismatic Vanguard features the return of Dominaria's dwarves, who were largely absent from the last two returns, but since the reinvention of Dwarves as a White-Red creature type in Kaladesh, are now back!

Juniper Order Rootweaver is a reference to the Juniper Order, an alliance of human druids and elves that began during the Dark ages and persists to this day, serving Gaea, the worldsoul, and Yavimaya.

Leyline Binding features what appears to be a modern update of a Phyrexian Bloodstock, or some poor sleeper agent who has become something similar. Academy Loremaster is just close to my heart, given how I'm Magic's Loremaster and now write books about it! Many of the Blue cards in the set feature the Tolarian Academy at Lat-Nam, which according to Academy Wall became a hotbed for the Phyrexians.

Combat Research appears to feature an Oculus, or something similar, which amusingly also draws cards. Shore Up gives us one of two Homarid cameos for the set, one of Dominaria's more unique creature types: a society of deep sea intelligent lobsterfolk who are utterly alien to surface dwellers. 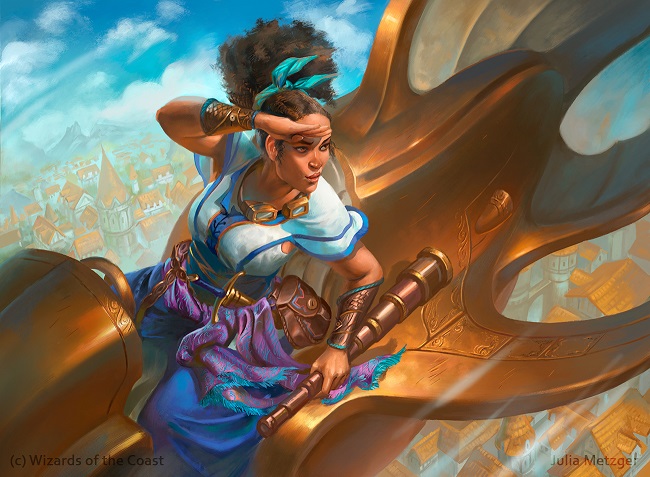 Talas Lookout is a reference to the technologically savvy people of Caliman who are known throughout the plane as pirates and merchants. They have a unique steampunk-ish look to their vehicles.

Timely Interference shows off the updated Viashino design of Dominaria United. Dominaria (2018) didn't feature any, and for the return they've been updated from the sort-of generic green lizard people design they had before.

The Volshe in Volshe Tideturner is a reference to the artist and scholar caste among the Vodalian merfolk. Pilfer features fan favorite characters Tinybones, Trinket Thief. This is a great example of how the set balanced the massive cast of Legends: by including them in art even if they didn't get new cards.

Sengir Connoisseur shows off a 'pureblood' Sengir vampire, one who is high up in the chain of the vampires sired by Sengir, the Dark Baron. Verrak, Warped Sengir, shows us the other end of the spectrum! 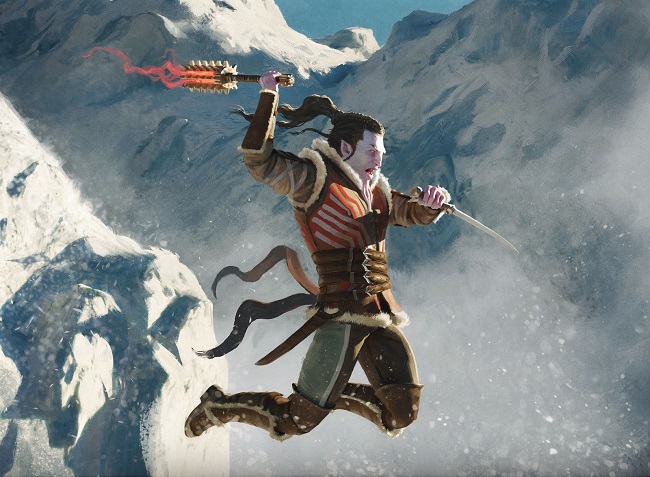 Balduvian Berserker shows that the Balduvians are still a distinct culture within New Argive, even if they're no longer a nation. Many of the kor from Rath took to their more nomadic lifestyle.

Rundvelt Hordemaster and Rulic Mons, Warren Chief are both callbacks to the tribe from classic Magic card Mons' Goblin Raiders and Pashalik Mons. Mons raiders were from the Rundvelt.

Barkweave Crusher might be a Phyrexian Bloodstock or Phyrexian Rager that was turned into one of the Phyrexian Woodmen, basically converted into elementals like Gaea's Protector.

Nishoba Brawler is a new version of the massive leonin people of Dominaria, seen Arctic Nishoba, Phantom Nishoba, and Sabertooth Nishoba. There are other leonin of course, but these are the big ones.

The date in Automatic Librarian's flavor text corresponds to the founding of the original Tolarian Academy, meaning it's 1,300 years old and probably designed by Urza himself. 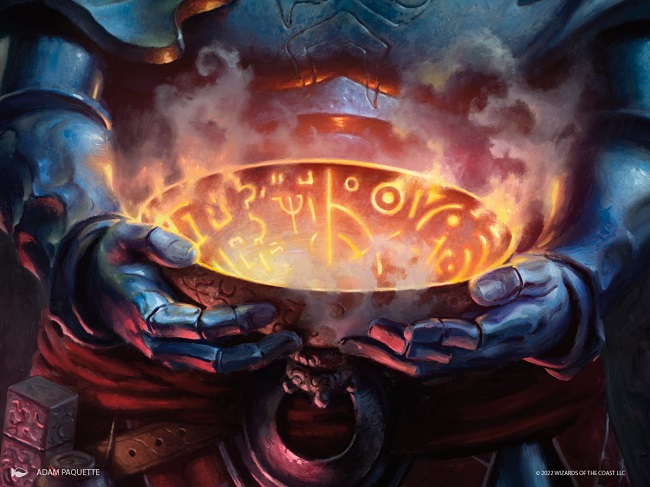 Karn's Sylex is a redesign from the original Golgothian Sylex. This one is actually a bit more in line with the description of the Sylex in The Brothers' War novel, although obviously moving away from the biblical reference in the original's name (Golgotha is the site where Jesus was crucified). While the original sylex wasn't Legendary (it predated Legendary permanents!), there were a number of possible Sylexes in Dominaria's history, with a real and fake one circulating during the Brothers' War and another appearing in the possession of the planeswalker Ravidel during some events in the old Armada comics. It's possible that Karn's Sylex isn't even the same one Urza used at all! 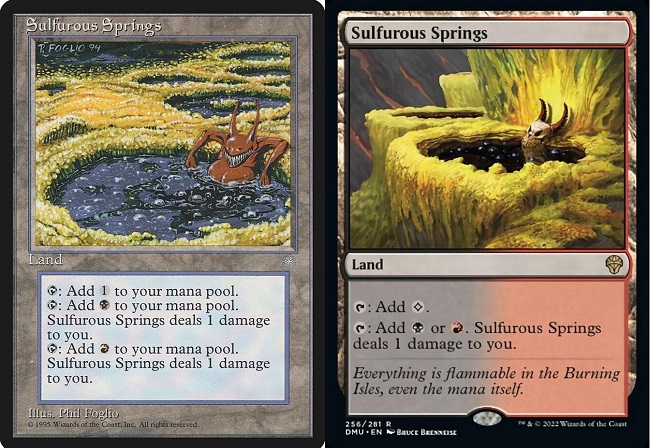 Sulfurous Springs references the classic Phil Foglio art, where the lounging devil has died relaxing in the spring.

Fallaji Wayfarer is a cute throw forward to the Brothers' War, in which the Fallaji are one of the factions that end up being usurped by the Brothers and employed in their decades-long war.

Gerrard's Hourglass Pendant is one of the few bits of the Legacy, a collection of artifacts that when combined unleashed Urza's ultimate weapon against Phyrexia. The Pendant itself was part of an earlier scrapped plotline for the Weatherlight Saga, and when plans changed the Pendant wasn't mentioned again.

Robaran Mercenaries are Robin Hood-esque mercenaries who attracted a number of famous Legends in Dominaria's past, most notable Jasmine Boreal of the Seven, Jedit Ojanen, Mercenary, Hunding Gjornersen and Hazezon, Shaper of Sand.

I just don't have time to go into detail on the set's legends, but I'll talk about real-life references and history below. You can read their lore blurbs in this article. 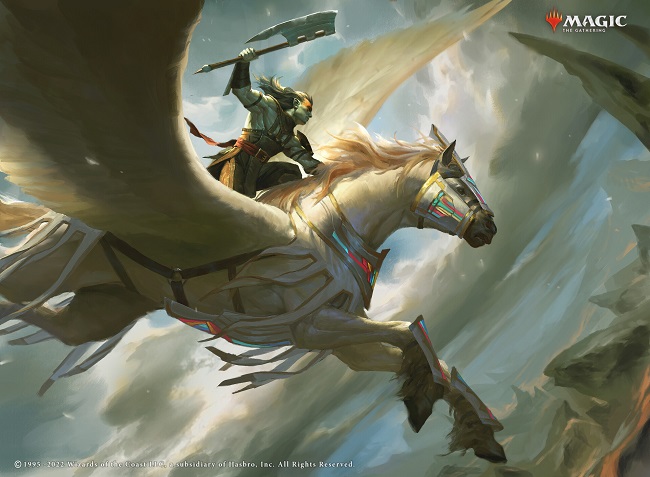 There are 45 kicker cards in Dominaria United, most of which are collaborations between factions who weren't allies before the Invasion as the flavor for off-color kicker costs. While we don't have time for all of them, I wanted to highlight a few of what I think are the coolest examples!

A few have wedge-aligned color identities, which is a really cool throwback to old cycles of similar wedge-aligned cards from Apocalypse, like Ana, Ceta, Dega, Necra, and Raka. If you've never heard these names before, it's mostly because wedges were never relevant until Khans of Tarkir, and by then the names of the clans took over in the Magic community zeitgeist.

Archangel of Wrath is a great example of how Dominarian lore was wonderfully melded for a cohesive modern take. The legacy of Akroma, Angel of Wrath has been folded into the Church of Serra on Dominaria, with the Order of Akroma having been founded by refugees from Otaria (the continent that Odyssey and Onslaught took place on) who sought to unify their beliefs with that of the church. It's also close to my heart as Degavolver, part of that cycle I mentioned earlier, and the rest of the Volver cycle blew my mind as a young Magic player.

Cleaving Skyrider is the first in a series of off-color kicker cards that features the cross-collaboration of Dominaria's people. In this case, it's a Keldon warrior riding a pegasus from Sursi - something that would have been unheard of before this point.

Stronghold Arena features kor and elf combatants in a Cabal Pit Fight (something that was big back in the day) coming together.

A few other cool or unique examples are: 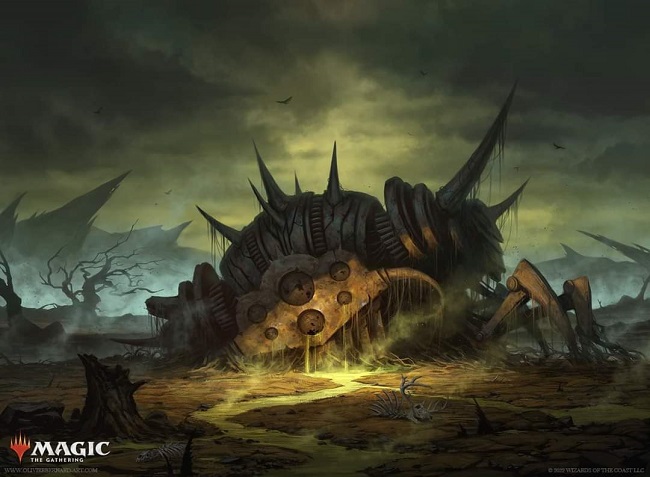 While I don't have any more word space (or brain space) for more right now, Ethan Fleischer from the Design Team is quite literally the Dominaria expert, and did some great threads to cover more information!

I'm not going to cover every legendary card from #MTGDominaria here, just the ones that I have something to say about. 1/X

I'll be back with another Flavor Build soon (I know I promised Tetsuo, Imperial Champion), but there are so many great Sagas in Dominaria United, I'm going to tackle those first when I return!