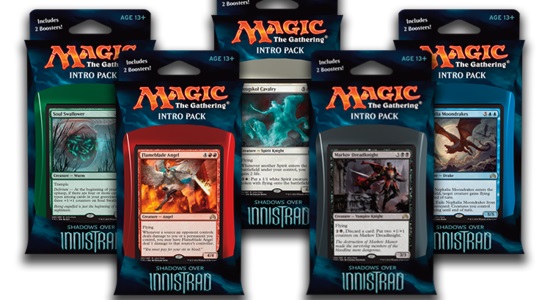 I received some terrible news last week. Very disappointing stuff. Iâm still trying to process what my future is going to look like. It wasnât long ago something very important to me was overflowing with abundance. Now, itâs looking like a river will be drying up into a trickle, and Iâm going to have to figure out how to adjust.

Afraid so. Since the advent of the Event Deck in 2011 with Mirrodin Besieged, weâve been spoiled for choice with regards to Preconstructed Magic products tied to set releases. Between the two Event Decks and five Intro Packs, there was a total of seven different decks to enjoy. Sure, the aim between Intro Packs and Event Decks were different, but both shared a similar objective: to serve as on-ramps for the different levels of play in the game.

And they did more than that. Iâve often referred to preconstructed decks as âmuseum pieces.â This application occurred to me when I returned to the game after a lengthy absence, with 2009âs Zendikar. A long-ago history major, I was just as keen to discover what had transpired in my years away as I was with what was currently going on in the game. That meant I could spend a load of money buying up old cards orâ.â.â.â hey, remember those Theme Decks? The ones Iâd turned my nose up at back in Tempest block? Maybe theyâd have a story to tell after all.

And so began my love affair with preconstructed Magic. I discovered different decks showcased various mechanical or thematic aspects of each set, and if you wanted to get a sense of a set you could do a lot worse than to acquire the precon decks created from it.

Even when the focus of the precon decks changed with 2008âs Shards of Alara, transforming from set showcases into a more beginner-friendly product, the Intro Pack, the ability to highlight a setâs identity was unchanged. Each of the five Intro Packs of Shards of Alara was tied to one of the planeâs five Shards, so playing Grixis Undead was a very different experience from Naya Behemoths or Bant Exalted. Indeed, you could make a case that the thematic identity of the different shards was every bit as evident â if not more-so â in the Intro Packs than they would be in the âas-fanâ of a fistful of booster packs.

When I went on to buy my local gaming store in 2013, my interest in preconstructed Magic went from personal into professional. Like any game store owner, the question of how to introduce new and prospective players to the game of Magic was a driving concern. Wizards of the Coast gave us two ways to accomplish it â both of them through preconstructed decks. You could easily cold prospect with the âSample Decksâ they sent, 30-card mono-colored decks designed to be given away rather than sold. And if they were willing to spend money, there were the Intro Packs: a sixty-card deck and two booster packs.

All the while, Wizards has been looking very closely at the same issue. How do we invite new players into a complicated game? Not for nothing, the very first-ever preconstructed Magic release â 1999âs Rivals â had an instruct-new-players focus, and would serve as a model for a stream of products right up to the Shadows over Innistrad Booster Battle Packs. Nevertheless twenty years later, as evidenced by the imminent departure of Intro Packs to make way for Planeswalker Decks, theyâre still trying to find the best answer.

Iâm not sure theyâve found it. And thatâs not just because the number of precon decks each set has gone from seven, to six in 2013 with Gatecrash (when they went to one Event Deck per set, though this fluctuated with the advent of the Clash Pack in 2014), to five with Oath of the Gatewatch (with Event Decks and Clash Packs discontinued)â.â.â.â

â¦down to two later this year.

Now, Iâm a realist. I understand in addition to product efficacy, Wizards has to look at the numbers. Are Intro Packs selling enough to justify their continued printing? Only Wizards has that answer. But thereâs little doubt, given their reception on social media, the Planeswalker Decks will sell. That was a lesson Wizards learned in 2011. Up until that point, precon decks were all reprints, but with new cards included in each deck the Commander releases were attractive even for many who werenât as interested in the Commander format (see: Flusterstorm).

But will they be better than Intro Packs? Iâm not convinced. Sure, âbetterâ is a vague term, but letâs look at the two product lines a little more closely with two questions in mind.

First, are they better at being an onramp than Intro Packs? And second, are they a worthy successor for Intro Packs in the pantheon of Preconstructed Magic?

The predecessor of the Intro Pack, the Theme Deck, wasnât really a learning tool. They werenât tier-1, competitive decks, and from Tempest to Nemesis the deck insert included a build list for an âadvancedâ version of the deck. But whether showcasing the tribal synergies of the Lorwynâs Merfolk with Merrow Riverways or the power of an artifact-heavy build with Mirrodinâs Sacrificial Bam, these decks could pack a punch. Not only that, but they were often fully-formed, with a strong mechanical/thematic identity through strong card choice, and the consistency to back it up.

The Intro Pack, with the aim of coaching aspiring Planeswalkers, made some radical changes. First, they cut the deck down to 41 cards â essentially the size of a Limited deck. This made the deck unsuitable for any kind of Constructed play, but gave the player 2/3 of a complete deck and invited them to add more cards. We can safely deduce that this model was not popular, since it only lasted about two years. By Magic 2011 (released in 2010, mind), weâd moved back to 60-card complete decks.

Now the question for Wizards became, if youâre going to sell a 60-card Intro Pack, whatâs the best way to entice the new players buying them to become more invested in the game? The answer was to make decks deliberately âbad.â We often hear that word from the more enfranchised player base â these decks are âbad.â Perhaps theyâre âbadâ because they are weak decks, or theyâre âbadâ because they represent a poor value for dollar (as recently declared by The Professor of the Tolarian Community College).

Both of these perspectives, though, suffer from being judgments from the perspective of the advanced player over the novice or returning player. Thatâs a mistake when evaluating this product for its intended audience. The tactic of the Intro Pack can be summed up as follows:

Itâs important to note the power level of the deck â the common criticism from the more established player-base â is arbitrarily set by Wizards of the Coast. Travesties like Shadows over Innistradâs draft-rehash Angelic Fury donât have to happen. A third rare, a more consistent deck through reduction of card variety, a right-sized mana baseâ.â.â.â there were many levers and dials that Wizards could have tinkered with to make for more broad-based appeal. What we see is what they chose â this isnât random happenstance.

Instead, they doubled down on the model, upping the MSRP by a couple bucks and throwing in an extra booster pack beginning with Magic 2013. Like their other tinkering adjustments, this one lasted a little while, but now theyâve pulled the plug.

Beginning with Kaladesh, the new Planeswalker Decks will include a mythic rare Planeswalker, and a deck built around them. Being fair, this does check off a few boxes. First, this increases brand identity of the different Planeswalkers, who are the (long overdue) face of modern Magic. Second, because these Planeswalkers wonât be reprints of previously-released cards, but rather brand-new cards not available in the Kaladesh booster packs, theyâre going to sell. New-card products have tended to be successes, as it gives Wizards a lot of ability to generate demand by sticking in a card or two thatâs pushed or satisfies demand (see: True-Name Nemesis, Shardless Agent).

Finally, it lets them open up the demand for Planeswalkers, since the new Planeswalker cards in the Planeswalker Decks will be tuned for more non-competitive play. Players love Planeswalkers, and now there will be many that are quite affordable for the casual or occasional player.

From that perspective, the Planeswalker Decks should do considerably better than the Intro Packs. But by moving the focus away from a guided new-player experience, the mission of the Intro Pack isnât being well-served. Instead of a deck loosely tuned to invite improvement, we have two decks tightly designed for sales optimization. Thereâs nothing wrong with that â Wizards is a business, not a public utility. But while Rosewater positions the Planeswalker Deck as a replacement to the Intro Packâ.â.â.âis it? Letâs look at it from a new-player-tutorial perspective.

In essence, what weâre almost seeing here is Magic with a variant twist to give it a more Planeswalker-based identity. Wizards has previously tried to create a beginner-friendly âvariantâ of Magic in an attempt to appeal to new players â but we havenât seen a Portal release since 1999. Intro Packs were cut from the same cloth as the sets they came from. Planeswalker Decks? Nope.

The other concern here is the idea of âpreconstructed deck as museum piece,â the idea that the Intro Packs in total offer a chance to experience the different themes and mechanics of a set on their own. Sure there have been exceptions (Imprint, for instance, was not included in any of the Intro Packs from Scars of Mirrodin, and because of printing concerns a dual-faced card has never been included in one either), but overall if you want to get a sense of a set, you can do so by playing its precon decks.

Said Rosewater, âThe decks will play into mechanical themes of the block, most often making use of a new keyword mechanic.â Thatâs great â but there are only two decks. Want to represent the innovations of Battle for Zendikar? That means that Awaken, Converge, Devoid, Ingest, Landfall, and Rally all have to be jammed in to 120 cards rather than over five decks. Sure, you can leave some of them out, but which ones? The idea of set representation takes a greater hit the more you exclude.

Thatâs saying nothing for sets whose themes are reinforced at the Intro Pack level. Five is a âmagic numberâ for our game, and having five decks has given Wizards the opportunity to showcase major set themes. In Return to Ravnica and Gatecrash, each of Ravnicaâs ten guilds got their own Intro Pack to highlight their own unique flavor and gameplay. The five clans of Khans of Tarkir got the same treatment. It would seem that avenue is now closed.

Just to be clear, despite the criticisms above I think the Planeswalker Decks are great ideas, and I canât wait to get my hands on them. Hey, Iâm a precon guy, after all! Having less to buy will make my wallet happy, and give me a long-awaited chance to spend more time on reviewing older releases on Ertaiâs Lament.

But these products should have replaced Event Decks, not Intro Packs. And because the Planeswalker Decks will have a more broad-based appeal, it may be difficult to parse a degree of success or failure based on sales data alone. Theyâll sell moreâ.â.â.âbut are they the right âonramp?â Sales data wonât cleanly reflect that.

So hereâs to Autumn, with our new Planeswalker Decksâ.â.â.âand the fervent hope they find a way to make a representative product. Otherwise, Kaladesh will be the first original set since 1995âs Homelands not to have an identity preserved in preconstructed amber.

Let that sink in.