Did you miss me? I'm back and ready to talk about some Magic prices and catch you up on a month's worth of new and price changes. Let's dive in quick on this MTG Finance update. It's gonna be a long one because we have a lot to cover! 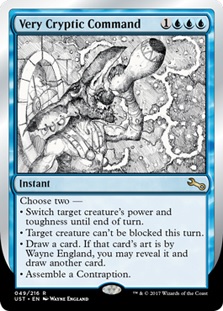 In my previous article, I talked pessimistically about the EV of opening Unstable boxes; and, for the most part, I was right. The average cost of non-basic land cards is pretty minimal. If you wanted singles to put in your Cube or play in Commander then you are much better off buying singles. However, I didn't know that they were going to include multiple versions of the same card, which makes collecting this set rather difficult. The Wayne England sketch art Very Cryptic Command is exceptionally rare, but can easily tip a box in your favor. That being said, if you want to draft this set (and I highly recommend it) then you are doing some of the cheapest drafts you've ever done. With all of the basic lands selling for between $1.50 and $3, most of the value of the pack is made up instantly with the basic land so you will end up recovering most of your value almost immediately. Foil basic lands in this set give it the same feel as opening a Masterpiece in an older set. Overall, I think this set has been a big success. The fact that the cost of sealed product is actually much higher than Standard product tells you how players feel about the set. Long term, the appeal of the draft format (and the fact that it doesn't appear overprinted) of this set might actually cause this sealed product to steadily rise.

This year, all of the GPs in the world will be run by ChannelFireball. The fact that there is only one tournament organizer means that they have a lot more say over what types of formats and side events get support. Last weekend's apparently phenomenal turnout for a Pauper event means that we are likely to see more events featuring the format in the future. CFB has already committed to two more GPs with pauper side events and players have taken notice. Since Christmas, Ash Barrens (a single print card from Commander 2016) has risen from $3 to $9, Gush has seen a modest price increase from $2 to $3, and even less commonly played cards like Standard Bearer have gone from pure bulk to $1. A lot of the appeal of the Pauper format is that a format that only has commons legal has some amount of price reduction built in due to the overabundance of cards. Unfortunately, due to the fact that Pauper includes every set in Magic, there are a lot of cards with tiny print quantities that will quickly be depleted. I'm most worried about cards without an easy avenue for a reprint that have dismal supply. Cards from pre-Modern sets are all at risk of huge price increases and, especially old weird commons like Oubliette, have the potential to explode in a day due to lack of supply. This supply problem is also sometimes compounded by the fact that this is usually a MTGO-only format and some cards haven't been printed at the same rarities in paper and on MTGO. Tangle, for instance, is legal despite only ever being printed once in paper in Invasion as an uncommon. My outlook on this is tenable and we will likely have a lot of unhappy people if the prices continue to rise due to tournaments to play in. Unfortunately, I don't think WOTC will have time to address any needed reprints for at least another year. If this type of Magic appeals to you, I would recommend getting the staples in chronological order of release. Older cards will get more expensive quickly.

Pro Tour Rivals of Ixalan is coming soon, and with it the most premier Modern event in the world. Modern staples will start to recover if they were printed in Iconic Masters very quickly if they haven't already. If you're unsure of what you might need to grab before it gets more expensive, take a look at this previous article. This past weekend was a split format Grand Prix and a Modern SCG Open and none of the Top 8 of either tournament shared a deck with the other one. Each tournament had seven unique decks so I can't really recommend getting anything in particular before the Pro Tour. What is important is that there are no plans for a banning or unbanning before the Pro Tour and it was explicitly communicated as such by Aaron Forsythe. If you were hoping to break out your Bloodbraid Elves or Jace, the Mind Sculptor in Modern, you will need to wait longer. What I'm expecting is actually not much price movement to a particular deck but rather a renewed interest in Modern raising the least recently reprinted staples. Cards like Tarmogoyf will continue to trend down while Mox Opal rises again due to lack of reprints. The next set of reprints that are scheduled to make it to our hands is Masters 25 in March. Honestly, with what cards made it into Iconic Masters (Mishra's Bauble??) I can't say any kind of prediction I can make will end up having any grounds in reality. What the general population thought was iconic and what Wizards of the Coast thought was iconic obviously did not align very well. Masters 25 does not have any lines to incorrectly read between, so I would just say be prepared for anything. If you're thinking about attending Modern tournaments between now and then I think buying before the Pro Tour makes the most sense. Otherwise, I would wait until Masters 25 and hope that it hits something on your deck's bingo board.

A few years ago, I would have quickly dismissed any notion that a card could be banned in Standard, but here we are after multiple bannings in multiple blocks in the last two years with possibly another on the horizon. I really don't want to blame artifact blocks but man, it's hard to question if we will ever get through one that doesn't see multiple cards banned. I believe this article is a kind of foreshadowing of the future. The 3+ color energy decks are dominant to the point of stifling a new set release. Last weekend's GP featured Temur Energy as 7 of the Top 8 finishing team's Standard choice. I find it hard to find a reason why something won't get banned for the sake of format diversity and making a new set release feel impactful in Standard. I'm not sure what will get banned, but it likely won't cause a ton of financial changes. The upside (if you can call another Standard banning an upside) is that the Temur Energy deck is only about $200-250 and most of it is tied up in cards unlikely to be deemed problematic. The core of the deck is Attune with Aether, Longtusk Cub, Servant of the Conduit, Rogue Refiner, Whirler Virtuoso, Harnessed Lightning, and Bristling Hydra which are usually all 4-ofs and retail for a whopping $14. Nobody stands to lose much money on this exchange, but it will be important to watch MTGO decklists if something does get banned and react quickly to the new coming decks. People will be excited to play something other than energy and I expect prices to climb quickly. I think one of the decks that just wasn't quite good enough will be some kind of dinosaur deck with Ripjaw Raptor, which should be insane for its rate but pales in comparison to the "energy menace".

I hope I've covered everything you've seen, but I'm always open to questions in the comments. This is going to be a brave new world of Magic with high expectations for some of the newer sets. If you're a more veteran player you're probably just as excited for a return to Dominaria and all that can bring. Hopefully it has a little of something for everyone!