Login
0 Item
Advanced Search
Sign In
Create Account
Hello and welcome to another glorious week of Commander finance. Iâm your host, Jim, and today weâre going to take a look at some terribly early leaks of the new Commander set. Theyâve been around for a long enough time and nobody has refuted their authenticity. That suggests to me that theyâre unfortunately very real. What we can do from this information is try to predict how players will react to the new cards and save a few bucks if youâre interested in making a new deck!

Ultimately what is going to be important to know is what is in the deck and what is not. The entire decklists have not been spoiled yet but the cards that have been spoiled as reprints are:

This isnât the whole decklist and doesnât include a lot of the staples of Scion of the Ur-Dragon decks. Those are the cards we need to consider and pay attention to see if they get spoiled. My favorite resource to use to figure out what people are playing in their EDH decks is EDHREC.com. This page shows us what aggregate five color dragon decks look like and what are the most important and expensive cards in the deck.

Taking a look at the cards that arenât included and arenât specifically a Scion of the Ur-Dragon synergy card (aka Teneb), Iâm left with a lot of cards that could get a lot cheaper if theyâre included or pretty expensive if theyâre not.

Utvara Hellkite is the first card on the list I want to take a look at. It was printed in a similar time to Hellkite Tyrant, which was recently reprinted. 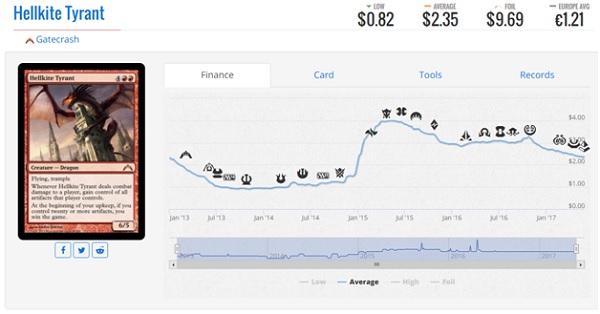 As you can see above, Hellkite Tyrant saw a huge spike right around Fate Reforged and continued climbing during Dragons of Tarkir. Turns out if you print 10 new legendary dragons people get excited about big powerful dragons. Most recently, it had begun to pick up steam again until it was reprinted in Commander 2016 around the time of Kaladesh. If Utvara Hellkite is included, then I expect it to see a similar trend down. It will probably drop from about $7 to $3 and then slowly creep back up. If itâs not included, it will be $10 or more very quickly. If you donât really keep up with spoilers and want to worry about it but want to play some sweet five color dragons, Iâd recommend buying this guy now. Itâs the kind of card that will recover eventually from a Commander printing and is pretty safe to buy now.

Another very popular and powerful card in dragon Commander decks that Iâm watching is Balefire Dragon. Itâs only been printed once at mythic in Innistrad but itâs got a powerful affect that lets you basically kill all of your opponentâs stuff. Itâs probably up for a reprint at this point in time but if it is missed I would be surprised if it didnât jump a few more dollars. Itâs $12 now but could easily be $20 if enough players realize itâs a powerful dragon they donât own.

The last card from EDHREC I want to talk about is Sarkhan Unbroken. They donât often include Planeswalkers in Commander decks and also have very few reprint mythics. This card fixes your mana and fits the dragon theme while having a game over ultimate if you have a Karrthus in your deck. Itâs $6.50 while seeing basically no competitive play in some really awkward colors for dragons. I think this is one of the first cards players will latch on to and add to their decks. The potential for a huge temporary price jump is pretty real.

While there are a lot of cards that are pretty obvious because theyâre dragons or have to do with dragons, I am very concerned about what the mana situation is going to look like in this deck. Theyâve done 4 color Commander decks with some pretty bad mana. In this five color deck we already see the Khans of Tarkir tri-lands and some dragon specific dual lands but what mana rocks are they going to include? Coalition Relic, Prismatic Geoscope, Chromatic Lantern, Gilded Lotus, and Quicksilver Amulet are all cards this type of deck would want but unlikely that you get all of them. We saw last time when Chromatic Lantern was only included in one deck that it dipped a little bit before going above what it was before it got reprinted. At this point itâs too early to tell what theyâre going to end up adding into the deck but if you make a short list of cards to watch it might be wise to buy them now rather than waiting. Itâs not always the case that the cards get cheaper after being reprinted.

While I outlined some cards to keep an eye on, Iâm still of the opinion that wait and see is the best course of action. Some people bought out Zirilan of the Claw because âitâs good in EDHâ but that spike is entirely brought on by people trying to make money on the card and not those trying to play it. That kind of culture is dangerous to interact with because it can cause a lot of people to panic buy assuming this is the new price. I would be very surprised if Zirilan isnât back under $5 in a few months as buylists on that card have barely budged. Take a look at the cards with real demand with higher percentage buylists like the cards Iâve listed above if you want to get ahead of the dragon hype!