Well if you've been keeping up at all with Magic 2019 spoilers, then you'd see that they are doing a great job of wrecking my future "Don't Forget Me" articles. This week we're going to stop focusing on the cards that need saving and talk about some that are being saved! 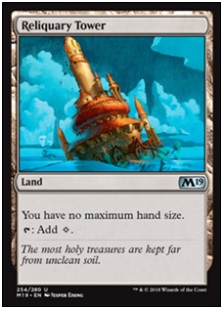 Let's start this off slowly with a much needed reprint for Commander players everywhere. If you're not a Commander player it's okay. This is like the Sol Ring of lands. It can go in every deck and as long as it's priced accordingly it will end up in all of them. Right now it is $5 and I expect these to easily still be $1 after a reprint. Pay attention to your M19 drafts as this is the kind of card you can expect pretty late as it's not a Limited all-star and its price often surprises people. 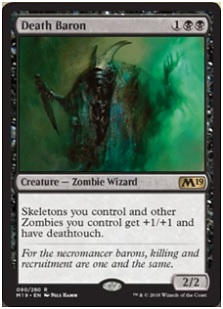 Death Baron is another silent giant that once retailed for $20! It was given away as a full art promo at GP Vegas but that won't do much for its price. This card may be the one last hurrah that Amonkhet zombies want to try to rumble in Standard. I'm not sure it will be enough without Cryptbreaker and Relentless Dead from Shadows over Innistrad block but if you're not in any rush to get a copy of Death Baron, I'd wait until rotation. I expect it to pre-order for $5 but drop to $2-3 after the hype dies down. 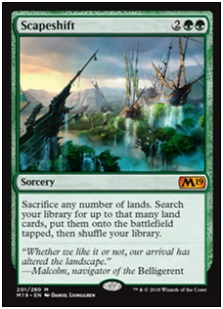 Well this was unexpected, right? Actually, not really. Scapeshift with this art was released as a MTGO promo (which you can view here courtesy of Scryfall.com) so it's not actually that unexpected. There are a number of cards that receive new art on MTGO before they make it into paper, but there was an expectation that Scapeshift could be coming. Did I expect it in Core Set 19? I'd be lying if I said yes. I did, however, expect it relatively soon. Maybe in a Masters set or a supplemental set or Commander 2019. Either way, if you had extra copies of this card, you should have already sold them.Scapeshift peaked at about $60 and I expect it to fall pretty rapidly from that price point. I'd be surprised if it was preordering for less than $20. What is important here is not what the price will be after the reprint. It will obviously be much lower, but the real question is where the other cards that are part of this Modern deck will end up. Through the Breach and Valakut, the Molten Pinnacle are the two cards I expect to see the biggest price jumps due to the reprinting of Scapeshift. The new and abundant supply of the card will cause people to look more closely at Through the Breach than they previously would have. Through the Breach is about $55. The difference between buying 4 Through the Breach and 4 Scapeshift, $460, sounds a lot worse than $300 if Scapeshift becomes $20. The best play here is to buy the future cards you need when a reprint gets announced and not to worry too much about the reprint itself. 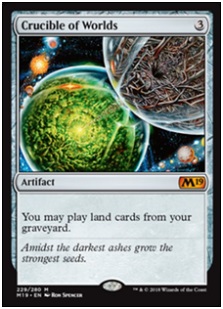 Perhaps this was not in everyone's minds as a must-have reprint but it is another great nod to players that play non-Standard formats. This is unlikely to be format warping and will probably be quickly gobbled up by Commander players wishing to Strip Mine their friends out of existence. Most players only play a single copy, so I wouldn't expect it to retain much of a price tag after this reprint. It's peaked at about $65 and I expect a quick fall into the $20 range and possibly even $10 range if this set continues to over deliver on expectations.

Now there are definitely a lot more spoilers still to come, but this set looks to be jam packed with value. It has 5 Planeswalkers (Ajani, Tezzeret, Liliana, Sarkhan, and Vivien) as well as 5 Elder dragons (one of which turns into a Planeswalker!) and many many more rares and uncommons to be revealed. I hope you're as excited as I am because this is going to be a wild spoiler season.