There was a point where there were scheduled ban list announcements.

You knew for sure that on August 21st there was going to be a Banned And Restricted announcement and could plan accordingly. Of course, the issue with this (and the reason that it was changed) was if something was a major problem that needed addressing it had to sit in limbo until the next scheduled announcement. Often years could go by without changes to the ban list, so this was a reasonable schedule to keep.

Of course, now we're on the other side of things, where a ban or format change can strike any time, any place!

Normally "no changes" would be par for the course, a simple one sentence affirmation that all is good in the neighborhood. Unfortunately, there's not much normal about the state of Standard for the last few years.

Standard bans have been so numerous they've almost felt commonplace, which is admittedly been necessary but also a very unhealthy place for a format to be. This has unfortunately led constant bannings to feel like the norm rather than a last resort.

There's no doubt that Alrund's Epiphany and Esika's Chariot are probably the best two cards in Standard. There's always going to be a "best" card and frankly that is okay. The issue is mostly with the play patterns of Alrund's Epiphany, as it demands a certain type of answer (mostly just counterspells) that many decks just don't have access to, which stifles format diversity. There's a reason why most decks at Worlds were either playing Alrund's Epiphany or just trying to go so fast they could ignore it.

However, that doesn't necessarily mean that it needs to be banned.

The format is still relatively young, with innovation coming both at the World Championship as well as other events during and after. Furthermore, the new set, Innistrad: Crimson Vow, releases in a month! This is still a small and new Standard format with plenty of room to grow, we don't need to force bannings unless they are absolutely necessary.

Will Alrund's Epiphany need to be banned eventually? There's a decent chance, given the limited amount of counterplay that exists to such an effect, but it's not so egregious that players shouldn't have a chance to find ways to beat it.

Banning can't be a crux to replace solving problems with actual deck-building, metagaming, and gameplay, it needs to be a last resort.

Tibalt's Trickery is a card with good intentions; what would a counterspell look like if it was Red? And frankly, it achieves that purpose pretty well. You can stop your opponent from playing a spell, but a fairly risky cost.

The problem of course is that you can also target your own spell on turn two (or four depending on the build) and build your deck in a manner where you'll always hit something big and stupid.

Is this the best deck in Historic? Absolutely not.

Is this a good deck in Historic? Not really.

So why ban Tibalt's Trickery?

Frankly, the card is just rancid.

Throes of Chaos gave the deck a level consistency that moves it up from being a total meme, meaning it is a deck that can and will win matches of Magic in Historic. The problem is it feels a lot like Oops All Spells or Goblin Charbelcher, and Historic is not Legacy. There aren't really a lot of good safety values for glass cannon all-in combo decks, which can be extremely frustrating if you aren't playing a deck that has counterspells or discard.

The play patterns are awful and Historic is certainly a better format without Tibalt's Trickery and the non-games it brings to the format.

Aside - for the love of god Wizards of the Coast just ban the damn card and give us our wild cards back. Cards are rarely ever unsuspended and if you have to give out a few free wild cards in the off case it is unsuspended it ain't breaking the bank.

Printing Memory Lapse into Historic was a really cool idea in concept.

Memory Lapse is only legal in Legacy, where it can't compete with cards like Force of Will and Daze, but is a sweet and novel card. Historic getting to be a playground for cards like Memory Lapse that aren't quite there in Legacy but also aren't legal anywhere else is awesome.

The problem is that Memory Lapse is just a bit over the line.

Control, combo, and tempo decks have all turned to Memory Lapse as one of the best interactive cards in the format. This is bad for a number of reasons, the most of which being how much Memory Lapse punishes a poor draw/start and how much it punishes wanted to play higher mana cost spells.

However, I think the biggest difference in Memory Lapse now and Memory Lapse back in the day is how much the game has changed since its initial printing. Threats are better, planeswalkers now exist, and as we've seen in Standard a number of times now Time Walk effects are just much better than they used to be. Memory Lapse has the capability to be a two-mana Time Walk which is just too much.

It's unfortunate, but Memory Lapse leaving Historic is probably for the best.

Historic - Five Cards Will Be Rebalanced

Wait what was that last part?

There's been a lot of pearl clutching and fear of change when it comes to Historic embracing its place in Magic as the "digital only" format. Magic players tend to really dig in when it comes to any sort of change to the game, but the reality is that this isn't a "change" to Magic as a whole, just an exploration of another way to design the game.

As we have these new digital only cards from Historic Horizons, now Wizards of the Coast gets to patch them as they see fit to better balance them, like every computer game out there does. If early Zergling rushes are too powerful in Starcraft, they can increase the build time or tweak any number of other knobs until they get it right; now Magic can do the same thing. In paper this isn't possible, because you can't alter the printed words on cards that already exist. This is possible on MTG Arena and because these cards are only digital it's a perfect place for it.

Trust me, if it was possible to patch Oko, Thief of Crowns or Once Upon a Time rather than outright ban them, it's a much preferrable option.

There are five cards being nerfed and buffed, but the most important is Davriel's Withering. 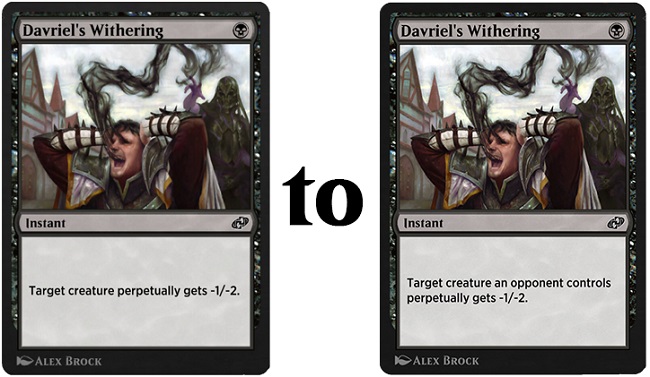 Davriel's Withering is a sweet little removal spell, sort of a Black Magma Spray in that it can kill something like Arclight Phoenix permanently utilizing the perpetual mechanic. However, it seems pretty clear that play design missed the interaction with Vesperlark, which leads to an infinite loop of Vesperlark entering and leaving the battlefield.

I have no doubt that if there were no logistical issues to doing this to actual Magic cards, like if Wizards of the Coast could just snap their fingers while in the Infinity Gauntlet and alter the text on every Oko, Thief of Crowns or Felidar Guardian in existence that they 100% would. But in the real world that just isn't a possibility.

The fact that it can be done for these digital only cards however is incredible and I love that MTG Arena is leaning in to Historic being a digital only format. There was even talk in the announcement of the possibility of editing the banned cards in the format (like Oko, Thief of Crowns or Teferi, Time Raveler) for Historic only, and while there's definitely a barrier to entry there to not be too confusing or jarring to paper players (maybe the cards need different names/art?) it's an exciting prospect.

Standard is going to be fine. Yes, Alrund's Epiphany may get the axe at some point, but it's in a far better place than it was a year ago and the design is much more reigned in and reasonable.

However, I must say that I am very excited for the prospects of Historic as a format. I think it's extremely exciting the things they do can by really leaning into the digital only nature of the format and any time that more design space is being opened up I am all for it!