I donât really want to go over my FNM too much. Thereâs not really a whole lot to say about it, and frankly, Iâm sick of writing tournament reports. The tournament report is probably the most hackneyed thing in Magic writing, and itâs pretty rare to be able to get anything out of them. If the author is any good at writing and does end up having some gems in his or her tournament report, the advice would probably be better conveyed in an article about the deckâciting a few specific gamesâthan a long, winding tournament report.

Then again, it could just be the deck I played, submitted by @BoltTheBird.

No offense to Rossâheâs awesome (we did the Fall Fail Draft together with Drew Sitte and GatheringMagic editor emeritus Trick Jarrett, which was way too much fun)âbut this deck is very poorly positioned, and I donât really feel like talking about the matchups. I lost the first two rounds handily to White Weenie and Delver, I narrowly beat a Grixis deck, I trounced a U/B deck in the 1â2 bracket, and I was then paired up against my friend R.J., whom I scooped to because he was in contention for prizes and I was not.

Taken from a past article I'm very proud of:

I guess my point is that Magic players donât always know what they want, but they know what they hate, and right now, itâs Standard. I wish I could finish on a message of â weâll be fine as long as we donât do this again,â but Iâm honestly not sure how we got here.

I think I figured out what âthisâ is.

That article was written almost a year ago to the date today, and, uh, itâs a little creepy.

I am writing this on the June 11; I worked on that article, getting PTQ numbers by calling up tournament organizers around the country for four days. It went up on June 10 of 2011, so Iâll guess that I started it on June 6.

When I started writing that piece, Standard attendance numbers were falling hard and fast, thanks to a certain W/U aggro-control deckâs dominance of Standard, a deck that just so happened to be aided by the existence of a $100 Standard-legal card.

I touched on it then; I was fairly certain that a perfect storm of innocent mistakes had to happen to create such a deck. A Standard card that costs a hundred bucks a pop, let alone, a card like Jace, the Mind Sculptor, is a once-in-a-lifetime kinda thing.

As it turns out, thereâs more than one way to dominate a format. 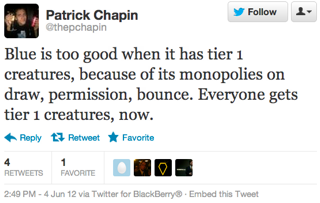 Have you guessed what âthisâ is yet?

Caw-Blade and Delver are W/U decks, and they have both proven quite capable of eclipsing all other competition in Standard. Thatâs where their similarities end; Caw-Blade had big, powerful cards that attacked from multiple angles, while Delverâwhile still having cards that attack from multiple anglesâis a tempo deck that can slide under even the most aggressive decks with ease, and now that Restoration Angel exists, a Delver player can flip the roles at will and be a better control deck or a better aggro deck than whatever other deck the poor opponent was deluded into playing. 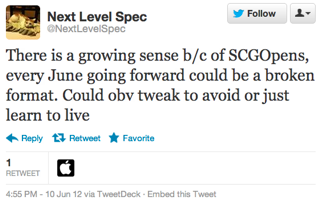 The difference between the two formats is that attendance has been holding strong this summer. This is probably thanks to Innistrad being one of the better sets in the history of the game in every aspect. Also, it doesnât do much good to compare this yearâs PTQ attendances to last yearâs; last yearâs numbers were warped by Caw-Blade.

Soâanother summer, another Standard PTQ season dominated by a W/U deck with Swords in it. We can complain about it or we can try to figure out the reasons itâs happened for the second consecutive year so we can try not to repeat it.

Brief aside on the StarCityGames Open Series circuit: The removal of the monetary rewards and free entry from the playerâs club essentially decreased its importance and relevance as a force in the overall metagame from near-GP level down to that of a Magic Online premier event. There is no longer reasons (besides the insanely positive-EV invitational) for the grinder class of players to travel for these events, which leads them to be solely regional affairs. However, some regions (such as SCG Nashville) contain a high concentration of the former grinders and produce significant results as can be seen by last weekâs Delver deck.

He summed up the new version of the SCG circuit pretty well there; while they still represent a step up from the weekly tournament fare, theyâre just not as densely populated by good players anymore, thanks to the newly implemented lack of incentives to following the circuit across the continental United States. What this means is that this seasonâs SCG circuit is less indicative of the format as a whole and more just a bunch of amateur-level players colliding into each other.

Chris takes important care to note that while most SCG opens are regional, there are certain regions (the ones close to SCG HQ in Virginia) that attract a lot of the former grinders because itâs within driving distance. The results from these tournaments are usually worth paying attention to. Itâs probably safe to weigh the Northeast Opens a little heavier, too; the Northeast probably has the highest concentration of Magic players anywhere, as is routinely proven by attendance numbers of Northeastern tournaments. Itâs also worth noting that last weekendâs open in Massachusetts was attended by Hall of Famer Darwin Kastle, Grand Prix: Baltimore winner Matt Costa, and Grand Prix: Nashville winner Reid Duke, among others. So, yeah, not a soft tournament.

What Iâm getting at here is that the SCG circuit represents a dissemination of information and technology that no one, including Wizards R&D, has ever seen before. Magic metagames have always been fluid, but thanks to the rising number of premier-level paper events, players have been finding formats reaching their maturation points far, far sooner than ever before.

I donât think the average players would say, âI donât like a mature format.â I think a player would be more likely to say, âOH MY GOD I HAVE TO WATCH ANOTHER DELVER MIRROR?!?!? Klajfbsdklfhbsglkshdgbagjn.â

Player profiles play a role in this, too.

Iâm not sure what it is that makes a player not want to play the best deck. Is it pride? Is it the desire to express oneself? I honestly donât know.

Is innovation still rewarded in Magic these days? Was it ever?

Taken from Geordie Taitâs seminal letter to his future daughter:

Many of us [gamers] have felt separate from our peers and excluded from normal social activities because we were bright from a young age. We carry a chip on our shoulder because of that. We're an entire race of squanderers, of keen minds turned to inert and even flagellatory ends.
There is something in all of us, whether we eventually overcome it or not, that keeps us from playing the best deck, whatever it may be. My theory on this is that the type of person that is attracted to Magic generally wants to, on some level, show how smart he or she is. Magic is a sport of the mind, and this fact is never more obvious than when someone whips up a sweet brew with visions of spiking his or her first PTQ of the season and taking Standard by storm in his or her head. Outsmarting every other player in the room with an original thought, an original deck, is the quintessential way to highlight, in bold print, that youâre the smartest guy on the block.

That being said, I donât think Magic has been around as long as it has because it always proves who the best player isâ.â.â.âbecause it doesnât. My theory of why Magicâs had such a staggering presence of staying power is that it lends itself so readily to customization and creativityâto self-expression. And it does so without any of its players even realizing it, because Magic is that fucking good at it.

His ideal about Magic is simply, âany given Sunday.â Which, to be fair, is usually never the caseâa Blightsteel Colossus is not long for this world in a world full of Vapor Snagsâbut the illusion of a format like that is usually a strong one.

In this year and the last, that illusion has gone largely nonexistent, and people are starting to notice.