Let me read the announcement again.

Infinite combos have always been a scourge upon the format, but weâve always made it our policy not to ban them. The logic behind that decision was that players would simply find a new combo if we banned everything we could think of, but not anymore! Rules Committee member Devon Rule recently devised an algorithm to test every two- and three-card combination in the game for infinite combos, so now we can confidently ban every card that forms one. We plan to expand the list to four-card infinite combos in the near future and more cards thereafter.

The following is the official banned list for Commander games. These cards should not be played without prior agreement from the other players in the game.

Spawnsire of Ulamog is banned.

And there are two hundred fifteen more pages before you make it to the bottom of the list!

Oh, Iâd better make sure the decklist for todayâs article doesnât contain any banned cards, but it shouldnât be an issue. I never played with combo cards anyway.

Banned? How is this a combo card? Itâs a killable Maze of Ith! What could possibly form a combo kill with Ith, High Arcanist?

Oh, I never realized. Well, good thing they kept that out of the format, but this does mean I need a new deck before this article goes to publication; letâs boot up Magic Online.

All rightâgood. Tom, Dianne, and Phil are online.

Oh! And Dianne made a tool to search through a decklist and remove the banned cards, and then MTGO will fill it in with basic lands. We just need to manually ensure that our commanders are legal.

Tomâs loading up his Tariel, Reckoner of Souls deck. Wait, it was banned because of its interaction with Village Bell-Ringer and Blasting Station. Maybe Uyo, Silent Prophet? Oh, itâs a kill with Summer Bloom and Hedron Scrabbler. All right, Tomâs going to go build a new deck.

Dianneâs going with a Marrow-Gnawer deck, but the combo with Intruder Alarm got it banned. The sameâs true of her Krenko, Mob Boss and Kiki-Jiki, Mirror Breaker decks.

Oh, thatâs why Gray Ogre was banned! Itâs a three-card combo with Kiki-Jiki, Mirror Breaker and Intruder Alarm. So I guess we canât play nonlegendary creatures that can attack for damage unless they kill our own creatures. That ought to spice things up.

All right, weâre ready to go.

Opening hand: seven Islands. Thatâs not actually too bad; I usually mulligan away most of my non-mana sources anyway, and I can just copy somebody elseâs threat as soon as someone plays one.

Me: Island, Sakashima as Thrun, go.

Everyone else: I thought they banned the combosâ.â.â.â

Dianne: Not this again!

Phil: Doppelganger becomes a copy of Yomiji, and they die to the legend rule. Dingus Staff deals 4 to me, and the Yomijis return each other to my hand. Then the Deathrender triggers resolve, putting them both into play. They die again; repeat until Iâm at 0 life.

Me: Jeez, Phil, could we go one game without you killing the table on turn four? Thatâs not what the formatâs about.

Phil: Then what is it about?

Phil: If they didnât want me to combo off, they shouldâve banned the combo pieces. I mean, itâs not like Yomiji, Who Bars the Way has non-combo applications.

The Queen Is Dead. Long Live the Queen.

Obviously, the banned list isnât in a finished form given that combo kills like the one above still run rampant, but once we work out the kinks, I think everyone will be a lot happier with infinite combos gone. In fact, once weâre rid of them, we wonât need to run answers to opposing combos, and we can finally play the format the way it was meant to be played. Let me illustrate my point. Donât you want to be able to play a decklist like this?

Or if thatâs not your style, you could always play a token deck.

What Iâm trying to say is, The possibilities are endless. With more than four different commanders to choose from and one of your favorite cards from throughout Magicâs storied history, thereâs a lot to explore!

Weâre making good progress on pulling combos out of the format, but there are other things that offend the sensibilities of the Commander community that weâve yet to address. In short, people donât always uphold the social contract. 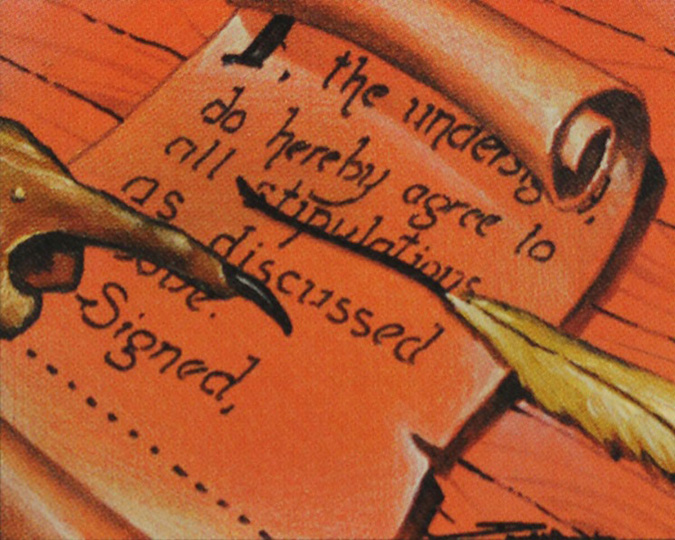 Contract from Below by Douglas Shuler

Some claim that the reason for this behavior is that many players arenât quite sure what the social contract entails. Others think itâs because thereâs no penalty for breaking it. Luckily, thereâs a simple solution to both of these issues: Draw it up in writing! This here is just a rough draft, but I hope that it will spark some community discussion, and we can decide upon a version to bring to every game store and kitchen table.

The participant in play of the Magic: The Gathering Commander format (not to be confused with the Magic: The Gathering Commander format), hereafter referred to as the âplayerâ agrees that neither through intentional action on the playerâs part, nor by inattentiveness, shall he or she let come to pass any of the following.

The player will not bring end to the game by means of an unbounded iteration of a set of functions, hereafter referred to as a âcombo.â Nor will the player execute a combo in such a way that it ensures that the game cannot end, such as by gaining an unlimited amount of life. Neither will the player make use of any cards that another player considers to be of such a high inherent power level so as to significantly unbalance the playing field (not to be confused with the battlefield, which is a conceptual space and thus immune to the angular unbalancing that a physical space might experience). Furthermore, the player agrees not to make use of cards which might, even unintentionally, inhibit another playerâs ability to execute a series of actions that he or she intends to take. This includes but is not limited to land destruction, countermagic, removal, and blockers. Finally, the player agrees not to make another player feel that the game has progressed unfairly, such as by winning the game.

Violation of these terms will result in immediate expulsion of the player from the playgroup, public humiliation, and a mark on the permanent record of the player indicating the playerâs past tendency to undermine the very foundations of civilization.

Give that a try with your playgroup, and youâll finally be able to play in peace knowing that nobody will try to impede your game plans. Iâd love to hear feedback from anyone without a mark on his or her permanent recordâsuch a mark would indicate his or her unfitness to advise me on such issues.