Theros is just around the corner, but we donât need to wait for the preview weeks to start in order to talk about its effects on Commander. We have Duel Decks: Heroes vs. Monsters and with it our first six Theros cards. That may not seem like very many, but two of them are legendary creaturesâand that means commander material. Iâm sure the rest of the set will influence any decks built around them, so instead of giving you lists, Iâm going to give you some ways to consider supporting them as commanders. 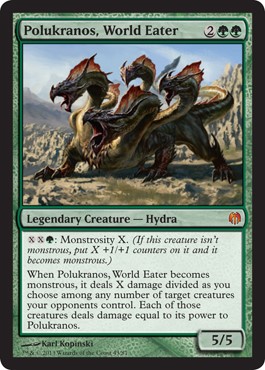 Polukranos certainly fits right into the commander slot. This format of ours is rife with mana, which serves not only to make this Hydra as monstrous as its first ability promises, but also to let you recast it from the command zone for more removal when you need it. Obviously, Polukranos grows stronger with more Wood Elves and Mana Reflections, but being able to control when itâs ready to become monstrous again is likewise important to maximizing its potential. Roaring Primadox and others like it are reasonable inclusions, but given that youâre going to want a ton of mana anyway, it seems simpler to just sacrifice Polukranos to something like Perilous Foraysâ.â.â.âor take a bit more advantage of its monstrous size:

Thatâs all well and good and would be fun for a few games, but we can do better. For one thing, Commander is full of creatures large enough that itâs difficult for Polukranos to kill them even with extra mana, and even if you ramp enough to beat an Artisan of Kozilek, you wonât have enough to get rid of the Luminate Primordial it brought with itâunless, of course, you can kill each with a single point of damage.

Unfortunately, even these Equipment wonât keep Polukranos alive through its fighting. I donât know about you, but I want to swing with my giant Hydras thank you very much. Beyond making Polukranos indestructible, Kusari-Gama looks to be our only real option. Thankfully, looks can be deceiving. If you read Polukranos, World Eater again, youâll see that the Hydra deals its damage before the creatures itâs fighting. Not that that really matters since nothing dies to lethal damage until after the ability resolvesâ.â.â.â

But it does matter a great deal when that damage reduces the other creaturesâ power. Not only will wither allow Polukranos to best creatures with greater power than toughness, it also lets you shrink creatures like Lord of Extinction that are too big to killâor even deal with them over the course of multiple Hydra castings.

All of these options are useful, but in the end, theyâre just helping Polukranos do what it already does. What a deck like this needs is a little spice. Keep the monstrosity counters past Polukranosâs death with Death's Presence or Ooze Flux; take over opposing creatures with Scythe of the Wretched; make a Squirrel for every point of power arrayed against you with Druid's Call. Heck, if you want to go really crazy, you can even burn opponents out with Avarice Totem and Stuffy Doll! 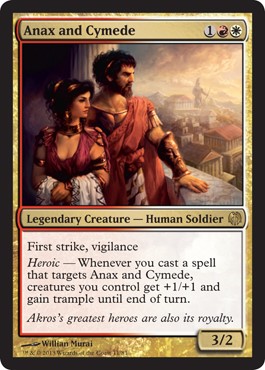 As for our second new legend, Anax and Cymede can dish out plenty of damage with either a whole lot of creatures or a whole lot of triggers, but youâll get more bang for your buck with some of each. Unfortunately, creature spells donât target (nor do most token-makers), so weâll be forced to have two separate categories. That means weâre going to need cards that can fulfill our requirements repeatedly, and while there are plenty of token-makers like Assemble the Legion and Orochi Hatchery, casting spells more than once takes a bit more work.

There are ways to reuse instants and sorceries, but the best way to repeatedly target Akrosâs heroes is a little bit different.

These Auras become particularly insane with something like Celestial Ancient or Ajani's Chosen, but making those cards consistent demands a broader theme. That might not strike you as a great idea given that Auras are mostly good for making one giant creature rather than a bunch of little ones, but there are actually a surprising number that reward you for swarming.

Whatâs more, thereâs no better time to start looking at an enchantment theme than the present. After all, Theros block is sure to be full of new tools to bolster the old Mesa Enchantress approach.

The final setup is to play a bunch of cheap cantrips such as Crimson Wisps and run a storm deck (sadly, Anax and Cymede arenât worded like Livewire Lash, so Grapeshot wonât make copies of Glorious Charge). On the bright side, you can Radiate a Bandage to draw a million cards! Whatâs more, weâve recently seen some cool cards that make storming with a bunch of tokens look more appealing.

Add in Thermopod and Slate of Ancestry, and you have all that you need for a truly momentous Empty the Warrens or Haze of Rage.

Itâs possible to mix and match these approaches to some degree, and regardless of which tactic you take, thereâs more to do. You can double your trigger count with Knowledge Pool or Possibility Storm, increase the triggersâ effectiveness with True Conviction, and gain extra attacks with the pump using Aggravated Assault. All in all, these new Wonder Twins offer a lot more options for swarming than Jor Kadeen, the Prevailer, so Iâm looking forward to playing with them.

As you can see, Iâm already champing at the bit to try out these new commanders. Iâm sure there are more exciting uses for them that I havenât come up with, so I want to hear yours. Do you have a great idea for a new theme or the perfect card to slot into a deck? Share it in the comments!