After last weekâs poll, this column finds itself in a bit of a pickle. You see, a purely democratic voting system never really pleases people because thereâs no compromise; a huge portion of the voting population is simply ignored. Worse yet, this particular instance split almost down the middle between those wanting a design skeleton and those favoring further flavor exploration; and on top of that, the number who wanted to explore a different setting entirely was far from insubstantial. I spent a while trying to concoct some sort of compromise, but everything boiled down to two separate articles awkwardly mashed together.

Iâm sure that wouldnât go over terribly, but Iâm not looking for universal acceptance. Iâm looking to create something valuable for you, and that means Iâm going to try to write an article that some of you will love, even if it pisses a few people off. Under the assumption that you know what you want to read, this realization still tells me very little about which approach to choose. Then, I realized that the people looking to see cards designed as examples would have finished the article the poll was in, whereas itâs possible that some people who held opposing viewpoints never made it to the end. A small and arbitrary effect? Yes, but itâll do.

So, weâre going to start constructing a design skeleton for the first set in this new block. Letâs call it Life, The Universe, and Everything. âWhat is a design skeleton?â you ask. Iâll pass this one off to the esteemed Mr. Rosewater:

The simplest metaphor I can think of is a blueprint. Before builders can come in and build a house, the architect has to map out what exactly he wants in the house. A design skeleton is a preliminary blueprint that helps the designer map out what he or she needs to have in the set.

Speaking of which, you should probably read (or reread) MaRoâs Nuts & Bolts series before we go any further.

Are you back? Okay, good. Letâs get to some numbers. Life is a large set, and since Shards of Alara, that has meant that weâre getting 249 cardsâ.â.â.âgive or take a few. Twenty of those are basic lands with various artworks, and the remaining 229 generally break down into 15 mythics, 53 rares, 60 uncommons, and 101 commons. But weâre not going to work with all of that at once. For one thing, itâs too many moving pieces to handle, and for another, we donât know what roles the higher rarities need to assume until weâve dealt with the ones below them.

So, letâs start with just the commons; 101 doesnât divide evenly into five, but thereâs enough buried treasure lore to make me suspect weâd want a few artifacts anyway. Given that this isnât Zendikar, we donât need a whole lot of lands at common, but Dark Ascension managed Evolving Wilds and Haunted Fengraf without feeling strange, so thereâs no reason to rule out having a couple if they fill a role. Iâm inclined to start off with two land slots at common and four spots for artifacts leaving each color with 19 commons, but this is all very much subject to change. Thatâs a whole lot of empty slots, and itâs easy to feel intimidated, but just following the same steps that MaRo laid out in his second Nuts & Bolts column can give you a good starting place. We might end up with something like this:

Thatâs all well and good, but we have a couple of glaring issues. First of all, real sets have more than one new mechanic, and we havenât decided on any of ours, so itâs tough to slot that in. Second, as its nomenclature would imply, a large set has more cards than a small one. That means that all of the nice prescriptions MaRo gave for âone of this effect, two of that effectâ need to be reconsidered, and while just noting that a small set has about two thirds as many commons per color as a large set will put you on the right track, we really need to look at the as-fan numbers. How many of a given effect are you likely to see when you crack open a booster pack?

Here things are going to get a bit mathy, so if you donât care to check up on all of the approximations Iâm making, youâre free to skip down to the next heading. For those of you who are still here, Iâll start by noting that other than foils and misprints (which Iâll henceforth ignore), duplicates of a card never appear together in a pack. Given that the pack has ten commons, three uncommons, one rare or mythic, and a basic land, we can easily calculate the probability of a booster containing at least one card with a given attribute by finding the chance that there will be none and subtracting it from 100%.

As an example, weâll see how easy it is to figure out that Shards of Alara is multicolored-focused. With 15 of its 101 commons being multicolored, the chance that none of the 10 commons in a given booster is multicolored isâ.â.â.

To subsequently miss the 20 out of 60 uncommons that were multicolored across the rarityâs three slots gives us:

Next, thereâs a 7/8 chance that the pack contains a rare and a 1/8 chance it contains a mythic. With their 10/53 and 12/15 ratios respectively, this leaves the opener of a Shards of Alara booster pack with more than a 96% chance of pulling one or more multicolored cards.

Ahead of the Pack

This in turn explains Rosewaterâs maxim that âIf the theme of your set isn't in common, it isn't your theme.â Doing a similar analysis of Champions of Kamigawaâs legendary creature theme shows that a pack of Champions had about an 82.5% chance of containing one or more legends. That may not seem a far cry from the 96% chance of having at least one multicolored card in a Shards pack, but the fact that most of that probability is due to an enormous number of rare Legends means that you would rarely open two or more legendary cards in your Champions pack (less than 31% of the time), whereas that number if far above 80% for multicolored cards in Shards boosters. 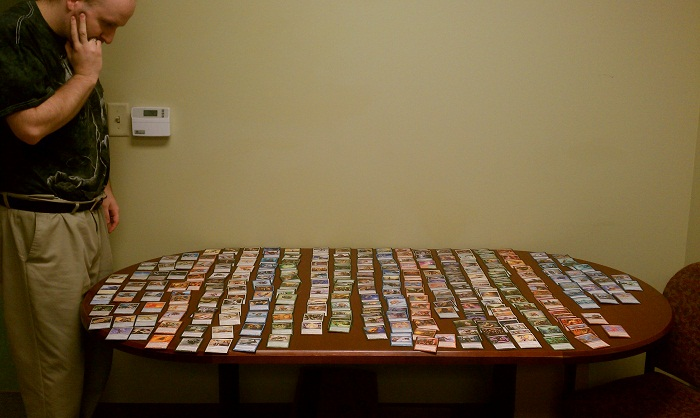 Magic design is often touted as more of an art than a science, and it isâ.â.â.âif you donât explore territory that requires new science. We have just such a case with the suggestion of making blue dominant in the setting. Torment showed us just what a heavily skewed color ratio can do to a Draft format, and I take Developmentâs refusal to let Innistrad go down the same path as support for a belief that letting people draft their preferred colors shouldnât require them to force a fringe archetype. Wobblesâs suggestion a few weeks ago to use hybrid mana certainly makes matters better, and itâs something Iâd be willing to experiment with in a different setting with a different color. But not blue. Blue has a reputation of being a favorite, and casual players who envision themselves as a red mage or a green mage would be less than thrilled to see direct evidence of that favoritism.

Iâve said that avoiding angering people isnât reason enough to discard a mechanic, but here, thereâs very little upside. Infect may have pissed off a portion of the player base, but a much bigger portion loved it. The group opposed to a ton of blue hybrids is all but guaranteed to be four times the size of the decisionâs supporters!

Blast from the Past

Getting back to the matter at hand, it takes a lot of iterations to pin down new mechanicsâjust look at how long it took us to iron out duel. Returning mechanics are a lot easier to work with since theyâre set in stone. Which mechanic ends up being the best fit will depend on the rest of the setâs structure, but figuring out what our viable options are will allow us to be conscious of our restrictions from the startâinstead of just hoping everything will fit together by happenstance.

In last weekâs comments, Alex Spalding proposed scry as a returning mechanic. Assuming this block exists reasonably far from Magic 2011, the four new cards that set gave the keyword shouldnât stop us from using it again, and scry has a lot of promising features. Perhaps the most exciting thing it offers is the opportunity to easily bleed a little bit of blue into each of the other colors, much like Zendikar (and every multicolored block) did for green and New Phyrexia for did for black. This lets us make the set play bluer without having to screw up the Draft environment or deal with the bad feelings inherent in an imbalanced color distribution.

Another strong contender for the slot is cascade. Besides having an evocative name for a water world, the mechanic offers a great execution of digging for buried treasure, and itâs a fan favorite. I suspect thatâs why itâs making an appearance in this summerâs new Planechase decks. Cascade does a fantastic job of introducing additional variance to the game without the same bad connotations that coin flips entail for Spikesâthat is assuming itâs used fairly. One of cascadeâs major shortcomings is how easy it is to break at low mana costs. Itâs hard to build a deck with only one spell below the 5 slot, but itâs very easy to build a deck with only a single 1-drop, so in Alara Reborn, Wizards decided to set 3 as the lower limit for cascade spellsâ converted mana costs.

That choice led to a Hypergenesis deck in Extendedâwhich left the card banned in Modernâand a mana-denial deck in Standard with Spreading Seas and Convincing Mirage. These effects arenât unbearable, but the fact that both Living End and Restore Balance decks are borderline playable in Modern makes me wary of printing many more 3-mana versions, and being confined to converted mana costs 4 and up certainly hurts the design.

The other issue with cascade is that itâs so powerful that any reasonably balanced card with the keyword looks weakâa fact thatâs only exacerbated by cascadeâs tendency to become stronger on more expensive cards. Just look at Bituminous Blast. Nevertheless, I think cascade has enough raw potential to warrant some effort on its behalf.

In the last corner, morph evokes mysteries of the deep, and it shares cascadeâs popularity. This setting could represent the keyword as a shadow lurking below the surface, the confusion as something jumps out of the water, or even some sort of creature that turn into schools of innocuous-seeming fish. As far as I can tell, the only reason that morph hasnât returned already is that itâs too complex to fit nicely at common, and it needs too many copies to show up to exist only at higher rarities. Morph could probably return at common in a set without any other complexity for beginners below uncommon, but without knowing how the rest of this first set will shape up, that requirement makes it by far the weakest contender of the three.

Weâre still a ways from being able to fill the initial design skeleton, but Iâm interested in hearing your thoughts about this change of pace. Did you enjoy delving into the structure underlying a Magic set? Would you like to spend more time talking about the choices of which mechanics fit on which creature sizes, or would you prefer to move on?