Dragon's Maze is hot off the printing presses and the Internetâs in a tizzy with new card discussion. Like any group of self-respecting Magic players, we in the Commander community are excited by the prospects new cards offer, but our format offers something more. Itâs not hard to see that Standard and Limited play are always changing, but even Legacy and Vintage become inhospitable to old favorites with new set releases. Commander not so much. By its casual nature, the format allows you to pull out an old deck and integrate seamlessly into a game with new cards. Today, I plan to celebrate that fact with a deck that doesnât use any cards from Dragon's Maze. 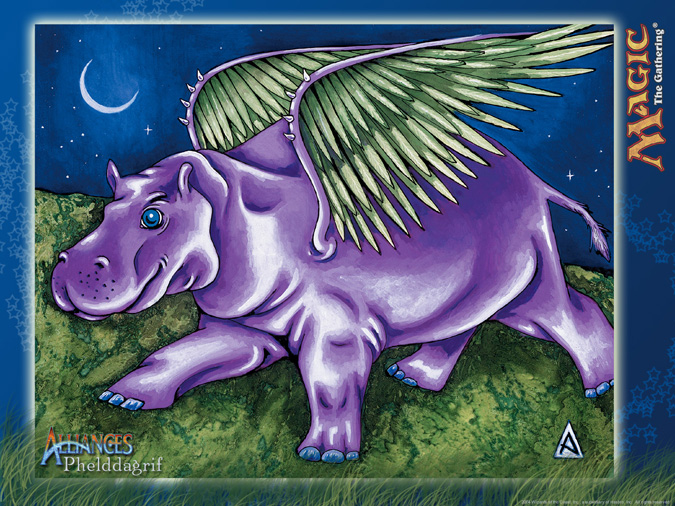 Phelddagrif is renowned as a Group Hug commander, intended to give everyone a bunch of cards and mana and let the game go crazy. But I included enough Howling Mines to choke a hippo in last weekâs Notion Thief deck, so Iâm looking to use the illustrious legend for something else entirely.

Magic has gone through a lot of mechanics in its lifetime. Some are beloved and keep coming back.

But Phelddagrif doesnât judge. Phelddagrif is here to make sure that banding and rampage finally have their days in the sun. Something tells me thatâs going to be harder than it sounds.

The silver lining is that these two mechanics work well together. You see, if you have multiple creatures with rampage in a bandâ.â.â.âOh, right. The ninety-nine point nine percent of Magic players who arenât ruleophiles have no idea what banding actually does.

Look messy? Trust me, it used to be even worse, and donât get me started on âBands with other ____s.â Anyway, if you can put a bunch of creatures with rampage into a band and blocked by a lot of creatures, theyâll all become huge. Even better, you can probably keep the whole band alive since you are able to choose how the damage is assigned.

Luckily, there are a few other ways to skirt around the issue.

But even with a bunch of rampaging creatures in a band, weâre a long way from getting anywhere. Itâs almost as though rampage and banding werenât powerful mechanics!

Attack with a band full of rampaging creatures, and your opponent can easily just choose not to block. Even worse, he can chump-block the entire band without even triggering rampage. We need to make our opponents throw a bunch of creatures in the way.

But to do that, our opponents need to actually control a bunch of creatures, and preferably summoning-sick onesâotherwise, they can just swing back at us to avoid blocking. Phelddagrif can supply those, but itâs not a bad idea to have some backups.

At this point, we can hope to have cobbled together a bunch of rampagers into a band and had them blocked by a million creatures, but weâre still not doing anything except maybe killing whatever creatures were left back. To take advantage of all this power, weâll need another card.

Or we can take the actually-deal-damage approach while making racing a non-option.

That planâs all well and good, but given the number of pieces involved, itâs going to take a long time to put together. In the meantime, weâre stuck with a deck is full of ways to give our opponents creatures, Lures, and ways to grant banding. So, why limit ourselves to rampage when thereâs so much other cool stuff to do when you can get your creatures blocked? The easiest is to kill the blockers.

But we can also take part in my favorite pastime: drawing a ton of cards.

Or go a little bit further afield and generate some really saucy effects. How would you like to make an opponent Soulblast himself?

Not good enough? Mind Control the entire board.

No, itâs not going to be the strongest deck ever, but itâs definitely going to showcase some of Magicâs storied history in a whole new light. Besides, itâs an excuse to play with a bunch of unfamiliar cards and keep our singleton format as varied as it was intended to be. Finally, itâs a deck silly enough to match its commander:

Iâve had the concept for a deck like this floating around my head ever since the first time I read The Wretched, but I couldnât figure out how to make it work until I let go of the initial inspiration. Sure, it ends up looking a lot like the combo of old with Thicket Basilisk and Lure, but even a small departure can lead to some very different results. Is there an idea nagging at you that just doesnât seem to work? A slight change of perspective may be all you need to craft something extraordinary.