Over the weekend the very first Pauper Mythic Championship Qualifier happened on Magic Online. While the MCQ at MagicFest Los Angeles was actually the format's very first MCQ, it's arguable that this one will likely have an even bigger, more far reaching impact than the former.

Final total: 214 players for the #MTGPauper MCQ!! This isn't just eight rounds, this makes for a NINE ROUND Magic tournament and easily the largest online Pauper tournament ever! @MagicOnline pic.twitter.com/6YCnyiwG3c

214 players turned out to play the event, which is far from a small number when it comes to Pauper. In fact, it's more players than the Legacy MCQ had just a few weeks ago! That event had 210 players, which can be seen at the bottom of this page. Modern MCQs do seem to have a higher turnout usually (the last one had 276 players), but given that Pauper is a growing format, I see this as a tremendously positive sign for its future.

It's especially noteworthy when the highest numbers we've ever seen in Magic Online Pauper Challenges were roughly around 120 players. Each of these events had at most seven rounds before the cut to top eight. This one, however, had a whopping nine! All told, this makes it the largest Pauper event ever held on the Magic Online platform, which is a very good sign for the likelihood of more of these happening in the future. In fact, when looking at the "Future of Magic Esports" article posted on the mothership, there's actually a small snippet that mentions Pauper MCQs (soon to be PTQs once more) will continue to happen.

How do these numbers stack up compared to paper events though? MCQs often have vastly different attendance numbers depending on where you go to play. For example, a few CoolStuffGames locations have run MCQs with well over 200 players, but these have been some of the highest around. Others have notably less, and we see this happen at MagicFests also.

The very first Pauper MCQ that happened at MagicFest Los Angeles had 186 players. A respectable number, but still not nearly as much as you might expect from other formats. While not MCQs specifically, we've also seen higher numbers for other Pauper events.

The very first double-ups had hundreds of players, with the one in London boasting just over 300 players. A regular Italian event that gets held every few months called Paupergeddon also has a high turnout. The one in February had 224 players. While the popular Rags to Riches events held at Mox Boarding House in Seattle have lower turnouts, this is usually because they're capped due to space. They very often reach that cap and would almost certainly go past that given the opportunity. I expect future Pauper events the world over to continue to grow and it's fantastic to see such large numbers for the format.

Now let's have a look at the metagame. While I could go into the specifics of overall meta breakdown, I'm going to drop a list of the top 32 archetypes and then talk more specifically about the top 8. If you want to examine the full decklists, you can find them posted on the mothership here. 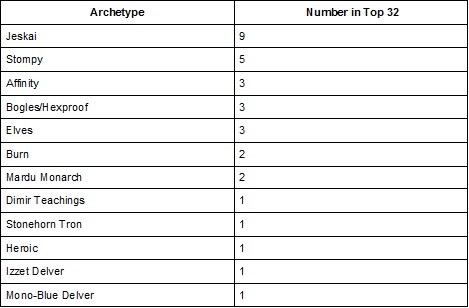 As you can tell, there's a lot happening here! I will say that for the sake of simplicity, I've elected to combine similar lists into a single archetype, even if they're technically different. For example, Affinity not only represents traditional Affinity, but there's also AtogShift, a newer build of the longtime archetype that's designed to go much more all-in on the strategy of casting Fling to take out opponents. Similarly, there's a ton of different versions of Jeskai. Some are a bit more control oriented, while others are a bit more midrange. By and large they all focus around a similar core, sharing the bulk of cards between one another.

Jeskai is the clear winner from a numbers standpoint in this event. Not only did it have the biggest showing in numbers in the overall Top 32, it also had easily the greatest percentage of the Top 8 at the event. Five of those slots were taken by Jeskai, with the others being Bogles, Stonehorn Tron, and Burn. This is a far cry from the Los Angeles MCQ that featured a full eight different lists. What changed?

The biggest difference between these events is that the LA MCQ was capped at five rounds. If you take a look at how many rounds your normal Swiss event should have, the MCQ - which, again, had 186 players - should have been closer to eight rounds. Because of this difference, the only realistic way to make the Top 8 was to go completely undefeated for each of the five rounds. This means things become a bit more skewed and don't give the full representation of what the meta might actually look like.

That doesn't mean the numbers are all doom and gloom, though. Challenge Top 8s have been a bit more diverse, although Jeskai still probably has a higher overall showing compared to most other decks. Is this healthy? It's somewhat hard to say, and depending on who you ask, players will have varying opinions on the matter. Some say it's very diverse right now, while others will think things have gotten somewhat stale and/or homogenized again. There's certainly some degree of merit to the latter, with Arcum's Astrolabe showing up in a whopping 28 of possible 32 top 8 slots, only not showing up in the one mono-colored deck - Burn.

Wizards of the Coast, and more specifically Play Design, didn't see any issue currently and opted to not ban anything from our format with the Banned and Restricted update on Monday. While the updates had far reaching effects on many other formats, particularly Modern and Vintage, nothing saw change in Pauper nor was there any mention given to format health.

If you're in the camp that remains concerned about the format health, remember, WotC is often slow to ban cards in our format. Peregrine Drake was allowed to stay for five months before being met with the banhammer, and the most recent set of bannings came roughly six months after the downshift of Foil. The cards players have been talking about the most this time - Arcum's Astrolabe, Ephemerate, and Weather the Storm - have barely been in the format for two and a half months. With the additional inclusion of new cards from the format unification, I can only imagine they're waiting to see if things self-correct before taking any definitive action.

Myself, I foresee a ban of some kind coming to our format within a year of Modern Horizons' release date. The numbers don't seem too healthy on the whole and there are a number of problematic game states some of the aforementioned cards bring with them. Unless numbers continue to worsen at an alarming rate, I wouldn't exactly expect them during the next B&R update in October. These cards are here to stay, so now comes the question of how best to beat them.

Bogles, aka Hexproof, took down the whole MCQ. While the deck can be shut down by a number of factors, it has such strong and fast plays that when it's able to go off, it goes off hard. This means that it's often able to come in hard with massive plays that quickly outpace what decks like Jeskai and Stonehorn Tron have going on. If the deck does stumble, however, it has a very hard time coming back, as Fog effects and the like can shut it down. This is where Fling has become such a relevant card, both here and in Affinity lists, which have also been seeing plenty of success lately. It gets over many of these kinds of effects, allowing you to defeat your opponent through everything they can throw at you. If you're planning a big event, you should be ready for both of these decks as well, in addition to other noteworthy aggro decks like Stompy, Burn, Goblins/Red Deck Wins, and Elves.

The coming months are very exciting for the future of the Pauper format. It feels like we're close to on-par with what you might expect from Legacy events, which may give credence to the idea of providing larger events all the way up to a Pauper Grand Prix in the future. I think we'll see it happen within the next year or two and let me be the first to say that I can't wait.