I'm back from PT Rivals of Ixalan and things could have gone better. Draft went well with a 4-2 finish, but Modern left much to be desired with a 4-6 record. The finish isn't what I'm going to focus on today, but rather the journey.

When I'm preparing for a Constructed Pro Tour, I have a lot of thoughts about my deck and its final configuration. Modern is a wide open format and I'm comfortable playing multiple decks, as this article series has greatly expanded my horizons.

I took many factors into consideration when narrowing down my deck choice. There were also some assumptions I made to help narrow things down:

Given these initial thoughts, I present to you the three seventy-five card decks that were contenders up until the final week:

was the dark horse for me. Field of Ruin has had me interested since the first week it was released as it helps you grind hard while disrupting the opponent on a new axis. Historically

Midrange decks such as Jund and Abzan were great at fighting fair, but fell short against land strategies like Tron and Scapeshift. Field of Ruin combined with Fulminator Mage and Surgical Extraction in the sideboard provides a reasonable angle of attack.

Liliana of the Veil is well-positioned against Burn, Death's Shadow, and Jeskai. She only under-delivers against Affinity out of the big four decks. This is not a proactive deck, but the play patterns look similar against nearly every opponent. This is helpful when making mulligan decisions in the dark Game 1.

Blackmail is my pet card that happens to play well in

. Thoughtseize is good on turn one because it can poke holes in the opponent's curve. I decided to trim on Seizes because they are horrid topdecks and the life loss destroys card advantage from Dark Confidant. Blackmail is the best late-game discard spell because it can hit even lands without losing life. This is relevant against Tron because they may reveal excess Urza lands which can turn on an early Surgical Extraction. This can also be relevant against Death's Shadow because fetch lands pump the namesake creature by three.

is not fast. I need to answer their 3-drop and I don't expect to tempo them out to invalidate the spell. Burn is a matchup where I like early discard, but the life loss is too important to cast Thoughtseize often. I don't care what I discard as long as I hit something. This is the case in many Modern matchups because they are built on synergies. Expect to face Blackmail more often in the future. There are many players at my local events sporting 1-2 copies and have great things to say about it.

A Modern IQ didn't work out for me the weekend before the Pro Tour as I lost to Merfolk and Affinity. This had me worried, but it's not a dealbreaker. It's very difficult to consistently do well in Modern events, even with plenty of deck-specific experience. Max McVety made the Top 8 with Affinity despite just starting to play it while Robot veteran, Rob Cucunato, went 0-3.

I added a second Drown in Sorrow to the sideboard as well as the third Abrupt Decay in the main to improve the creature-based matchups. Golgari Charm is my last flex sweeper effect that also happens to be my third answer to Leyline of Sanctity.

The play patterns of the deck get easier with time. It punishes players who mulligan, so I do get some percentage points for my opponent's decisions before they know what I'm playing. I keep more hands against Thoughtseize decks than against the rest of the field.

This deck has enough raw card advantage that I feel favored against Death's Shadow and Jeskai against a wide range of skill levels. I haven't had many games where I felt flooded. Courser of Kruphix, Tireless Tracker, Dark Confidant, Scavenging Ooze, Field of Ruin, and Hissing Quagmire all encourage lands on the battlefield. The individual power level of my cards is also high as it plays many 3-drops.

There are only two Collective Brutalities in the seventy-five. I considered adding a third to combat the potential wave of Burn.

After a 10-5 finish with Burn at SCG: Columbus I feel comfortable enough to play it at the Pro Tour.

Burn is easier to play which goes a long way in a six-teen round event. If my opponents choose to skimp on Burn interaction, I can take down even weaker matchups. Leyline of Sanctity still is underplayed.

Exquisite Firecraft has been so good for me I added a second copy in the sideboard. Since Molten Rain can come in for the same matchups, I don't want to a exceed a total of four 4-drops. It greatly improved my Jeskai Control post-board matchup. I would typically beat Jeskai Control Game 1 and lose both post-board games.

I moved a Searing Blaze to the sideboard as I was drawing it in too many matchups without enough opposing creatures. The effect is very strong, so I still want seven searing spells in my seventy-five.

Affinity isn't favorable and the Burn mirror can be a coin flip. I think Kor Firewalker isn't good in the board, but that won't stop people from playing it. This makes my list more well-rounded, but a dog in exactly the mirror. Jeskai and Death's Shadow are two matchups I have experience with so I welcome the challenge.

Burn is good against many fringe decks as I do the same thing every game. I can remove the guesswork of asking myself if my opening hand is good in unknown matchups. The downside of being so focused is it doesn't do well drawing too many lands or mulligans. This is a pretty big negative.

I was pretty sure Burn was a great call for SCG Columbus as it was relatively under the radar despite being consistently one of the most played decks. The following week, Burn had a good SCG circuit run which created some content. No Modern deck is so powerful it can withstand flex slots being devoted to beating you. This made me shy of pulling the trigger despite all of its positives.

I haven't been playing Bant Company lately, but I have a few friends, such as Mike Bourgoin, tearing it up on the IQ level. There have been some recent changes to the deck, but I still see people on the SCG circuit perform well and it also pops up on the 5-0 Magic Online League lists.

Bant Company is a deck I'm very comfortable playing. It mulligans well, but I need to keep hands based on the matchup. Devoted Druid entering the battlefield early is important against uninteractive decks, but will just die to Fatal Push and Lightning Bolt.

Mike Burgoin winning two IQs in the same month had me reconsidering my deck choice. It's truly a great feeling and you can play a good fair game as a plan B.

Bant Company is perhaps the most punishing deck in the format. When you tap out against an empty board there are many ways to get Devoted Druid into play at the end of turn and win. I won't get as many free wins like this at the Pro Tour. Death's Shadow is a 50/50 matchup, but lose to good players frequently. I would rather have a 50/50 matchup at the Pro Tour where my draws dictate the matchup because I may be fundamentally unfavored if a certain deck is advocated by more experienced players. Since Death's Shadow is a skill-intensive deck I expect to face great players which makes it a bad matchup.

Bant Company has a good matchup against Affinity and Jeskai regardless of the pilot. Burn is a tough matchup and requires things to go right to win. Kitchen Finks isn't great without the Viscera Seer combo, but shines against Red.

Despite being comfortable playing the deck it's very hard to play optimally. Once I get tired my win percentage sinks quickly. That's bad for a six-teen round event.

I learned that most Modern decks don't have many matchups they convincingly dominate. Most of my games were very close at the Pro Tour level which leads me to believe a lot of mistakes happen at the less competitive events. This is why two people can disagree so much about Modern matchups.

Overall, I was happy with Burn because 4-6 was only one win off from a 50/50 record. This is reasonable when you consider the tough competition I faced. A couple matches could have swung the other way with some timely topdecks.

I wouldn't change anything from the list I played posted above as it ran pretty smoothly. Jon Stern did make the Top 8 of Grand Prix: Toronto with a maindeck Vexing Devil over a Skullcrack. I'll give that a spin, but not 100% sold.

My metagame prediction was off as Humans was the most played deck and Death's Shadow wasn't too popular. Jeskai decks were also less common than I expected. Burn and Affinity were still in the top three most played decks, but I didn't face the robots. Modern is so diverse that it's difficult to face every popular deck.

Burn had a good weekend at PT: Rivals of Ixalan despite not making the Top 8. It had a healthy Day 2 conversion rate. It also put two players in the Top 8 of Grand Prix: Toronto, so the amount of hate might increase in the short run.

Burn may be the deck I play at a charity event I've been helping organize at Get Your Game On on February 24. The tournament entry fees will all be donated to the Leukemia & Lymphoma Society. We're still looking for card donations for prizes; if you want to donate contact me on Facebook or in the comments. 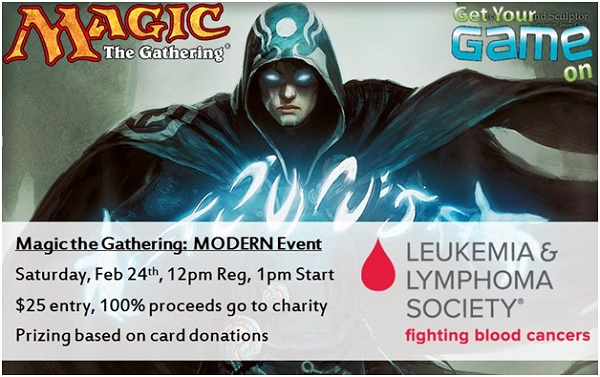 There are still plenty of sweet Modern events coming up so expect more decklists next time.

Thanks to RIW Hobbies, once again, for being such a great sponsor. That store is awesome.