One of the perks of being a Magic Journalist is that we get sneak peaks. Peaks into the new sets, upcoming news, and in this case a sweeping change to the Magic Online software. Now I must stress the following: This is an EARLY prototype. It's not even an Alpha. Nowhere near a beta. It's proof of concepts really. So what you're about to see is quite likely to change and shift before it ever hits your desktop.

Wizards is going to make Magic Online amazing. It's okay right now, it does what it needs to do but it has so many problems and glitches that I don't play it as much as I want to. Some of these issues are on their server side, but largely it rests in the client. The client software is buggy to say the least. It's clunky and most importantly (as Wizards has discovered) it's extremely counter-intuitive to the naive user. And all of that is about to change.

Wizards has brought in several new staffers including a UI expert, Adriana Moscatelli. She is a UI expert coming from companies like Nokia and she is quite the expert. She has also taken the game of Magic to heart. The other staffers present at the preview, Gils, Ryan Dhuse, and a few others were sharing stories of how she had come to Wizards and dove into Magic - taking it home as it were. She plays it regularly and understands how the card version works and how it should be represented on the computer. She also has taken her UI experience and done some in depth User-Centered Design studies to find how to best help users.

These changes to the UI also come with a major change to the application as a whole. The new version is being built on Silverlight, Microsoft's answer to Adobe Air which means it will be run in your browser (Internet Explorer, Firefox, Chrome etc.) It also means that it is now OS independent being able to run on Windows and Mac, and to some extent Linux natively! This is a huge change and will open the door for many more Magic fans to play online. They are not 100% committed to the Silverlight base, as there are still some reservations (such as its current lack for right-click support) but they feel confident than can fix these problems.

Enough chatter, let's show some of the pictures! Click on each picture to load up a bigger version of them.

As you can see, I used my odd screen size to an advantage. It stretches the play area out. I didn't get captures of it, but almost all the areas are resizable. The bottom, left and right zones are all draggable to change their size. Also note that the chat is no longer the thin vertical abomination. It's now in the lower right corner. It will allow you to carry on multiple conversations during the games. The right is hidden in the picture but it will contain the revealed cards and the Exiled cards in a single location instead of the windows that pop up and must be hidden. 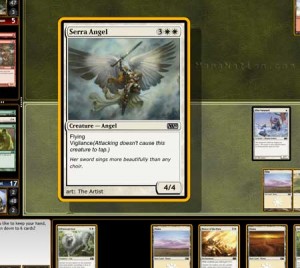 One of the features that most people don't even know about is the zoom capability in the current Magic Online. Here is an example of it in place in the new interface. One thing they highlighted is that they were avoiding the jagged, unpleasant text they are currently using. Every card is a vector image, composed of only two non-vectors: the card image itself, and the card's colored background. Otherwise the font, the expansion symbols, etc are all vector based and able to resize smoothly and cleanly for different screens and resolutions. 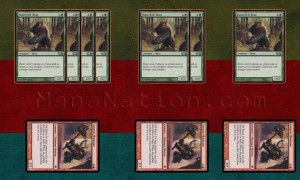 If you look up at the table view you'll see a thin red strip splitting the screen. When you enter combat that line expands and creates the epitomous red zone. As you declare attackers they tap (or stay untapped if they have Vigilance) and move to slightly overlap the red zone. When you pick a blocker and declare who it is blocking it rearranges your field to line them up with that card, rather than using the jumble of arrows that can sometimes occur in the current Magic Online.

The arrows, Adriana noted, were sometimes confusing to new players as they could become jumbled and overlapping so they are doing away with the arrows. They may make a return before the new MODO is released, but they were not to be found in the current preview.

Here is an example of the stack, and how it would work in a current early prototype (this is very conceptual, it had almost no functionality.)

As you can see, there are cards and there are effects, each rendered clearly different. This is an example concocted by R&D's Erik Lauer to show a complex example that would require a very clear and easy to follow stack.

The three guests in this group preview all left quite excited. Evan tweeted about it as soon as twitter came back up. And the PureMTGO writer also seemed quite interested about the potential we saw in the prototypes. Wizards was also having the judging staff come and see the prototype, explore and play around with it, to gain their feedback on how it feels and how clear it was to follow. As an early prototype, I asked the obvious question: "When?" Their target is the end of 2010. While that seems like a long ways away, it speaks to just how much is being changed. Their changing the entire experience of the application, mimicking Xbox's Duels of the Planeswalkers in many ways, but also maintain the clear and robust capabilities Magic Online offers.

As I said earlier, this is a very early prototype. It was not fully functional as for the game and was just meant as a preview into the interface. Things are likely to change, and I personally see the target of late 2010 as extremely aggressive. I won't expect it until mid-2011, but we'll see. The changes are gigantic and pose a huge opportunity for the next stage of Magic Online.

Thanks to Wizards for their time and allowing us this sneak peek into their progress, and to their staff for all the hard work on this next generation piece of software.