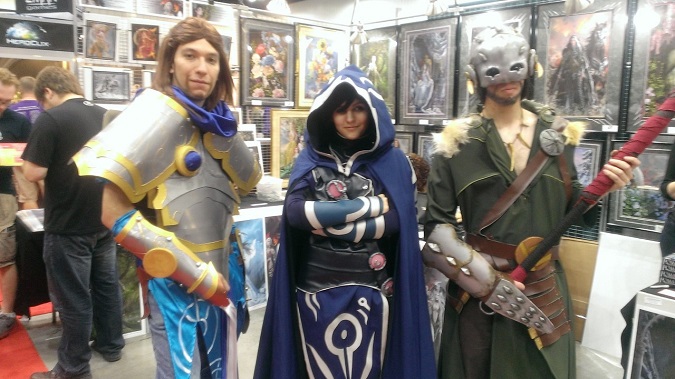 Well, in the last installment, you voted. Now itâs time to fete the victors and rue the losers from the Sweet Sixteen, and choose your champions for the next round! If youâre just joining up, Iâm on a mission to elevate Magicâs profile in the cosplay community and develop a great costume with your support. Iâve been doing my researchâwhew, cosplay is like bananas nuts parfait explosion, sweet friend. Iâm intrigued with the metagame: what/who is selling, which franchises rule, the developing culture, macro/micro forces, and how cosplayers leverage different talents. 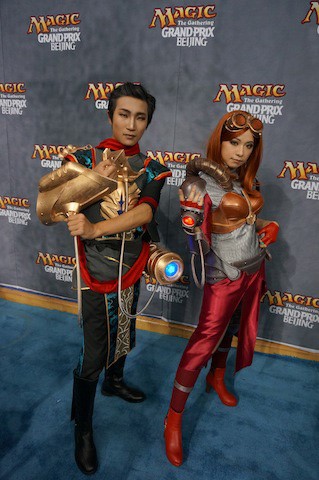 Thereâs the spectrum, of course. For sexy modeling, I think Tasha has style and fabulous posing skills, while for mood and characterizations, Lightning is a favorite. Yaya is beautiful but foremost an amazing costume designer and merchandiser; and Nigri is just super-savvy and energetic with her targeted marketing machine. Kamui is a sculptor in what she does with armor. I admire all these women for different reasons, and I think the takeaway here is simply that different styles of art appeal to different people.

Shut up, B00blas. Been asking myself: âWhat can I bring to cosplay?â Not +boobs! Maybe a little attitude. Realism. And of course, Magic. Not sure if anyone wants to pay $15 to see MJ look moody, but luckily, thatâs not my goal. My characterâs narrative will always be the focus. Iâd rather be the character. I want to make Eleshâs headdress seem capricious. I want to be so in Ninâs skin that four arms and a torture device look like jeans and a t-shirt on any other girl. 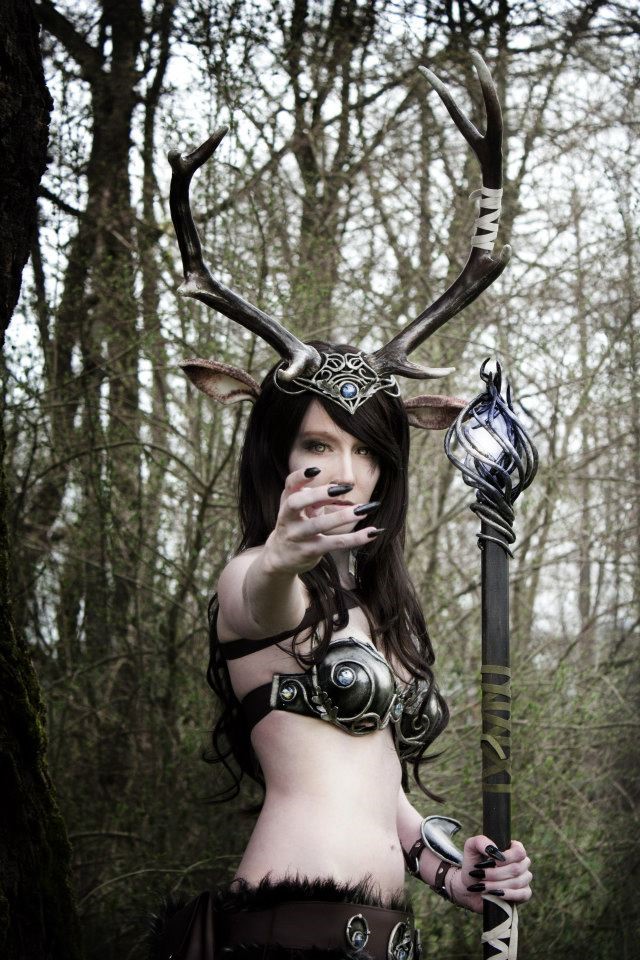 Lightning Cosplayâs great balls oâ faunâ.â.â.âExample of the insane plays that can happen when character, personality, costume, and photography have max synergy. 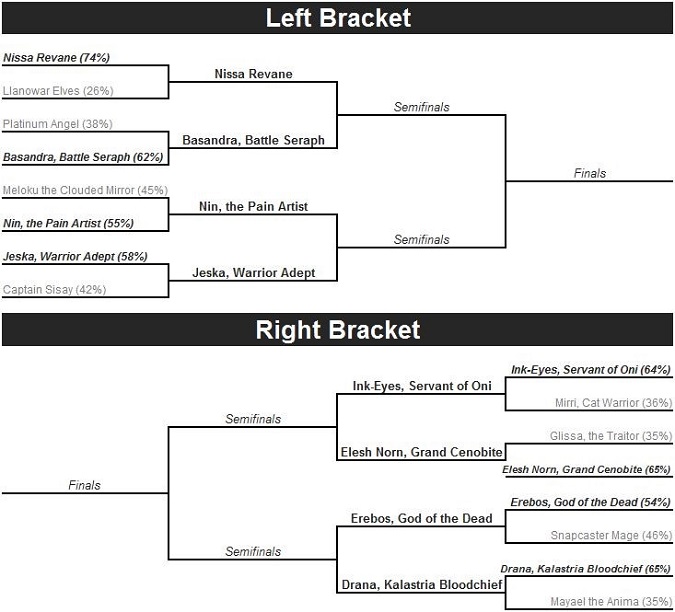 In the left bracket, Nissa Revane and her Zendikarian minions prevailed over those steampunks from Llanowar. Basandraâs two-piecer reigned supreme in the skies over Platinum Angelâs cool inaccessibility. Nin strong-armed Meloku into submission, and Jeska emerged victorious in a close call with Captain Sisay. On the right, we had the rat over the cat in a decisive win for Ink-Eyes versus Mirri. Elesh Norn compleatly routed Glissa, the Traitor; and Erebosâs whip proved more appealing for fans than the arm cannon of Snapcaster Mage. Finally, Drana, Kalastria Bloodchief sunk her teeth in deep against Mayael and drained the Anima of resistance.

Now itâs time for the quarterfinals and our breakdown of the new pairings. Todayâs focus is on flavorful mechanics. Letâs do this! 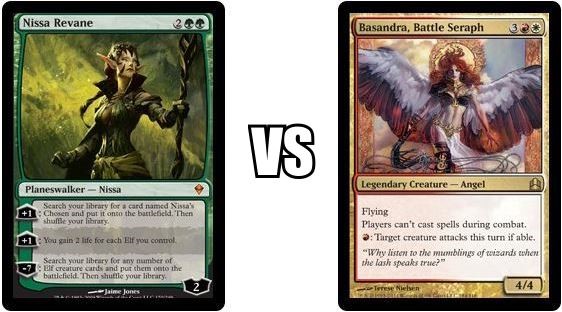 Whose command should inspire our vote? Nissaâs word is blindly obeyed by her Chosen, while Basandra convinces allies and enemies alike to get their butts in gear with that scourge. Do we look to the forests or the skies for inspiration? And is it the ideas of community and conviction or the ideas of force and fire that really get us going? 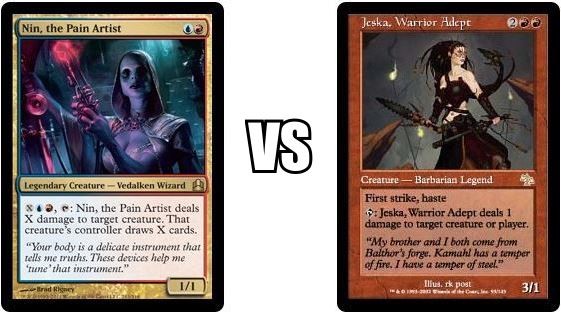 Nin promises to show you the path to enlightenment is through carefully engineered pain. Jeska skips the enlightenment part and just deals in damage. Wizard and barbarian represent two classic fantasy archetypes that provide vastly different answers to the same question of how to utterly subjugate and/or destroy the enemy. 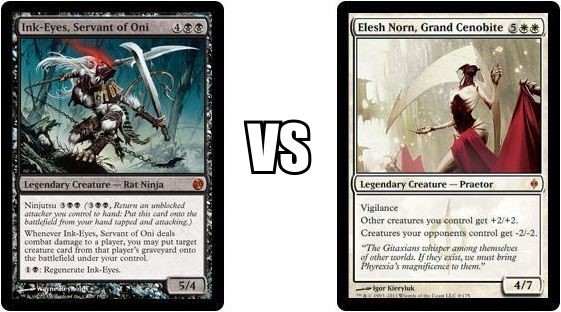 These ladies arenât kidding around. Two of the most powerful combatants in our little cosplay league, Ink-Eyes has been slaughtering all the unsuspecting in Cube while Elesh has been equally busy wiping boards of peons in Commander. Whose powered-up abilities should represent Magic in the semifinals? 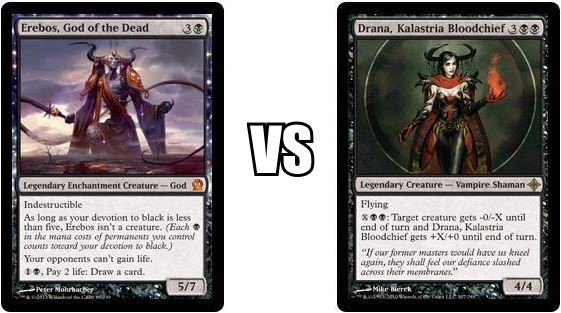 Ah, the matchup of darkness. Our black-horned beautifies fight it out in the Abyssâis the suavely elegant Erebos or the dangerously composed Drana our victor? Erebos demands your devotion, Drana demands your life force. Do we choose the God of the Deadâs more subtle strategy or the Bloodchiefâs brutal bite?

Thanks for participating, and please get out the vote! I am super-excited to see how the brackets play out and thenâ.â.â.âget to building our Magic community cosplay extravaganza.

Till next time, may Magic be your winning punt and your high-ROI time sink.