I started a petition two years ago to make a Magic: the Gathering art book. A few hundred people signed up to support it and seemingly nothing came from it. In January 2014, I put forth a formal proposal to make one with a Magic artist. It was met with a firm no.

Did these efforts help move the boulder to getting us an art book of Magic: the Gathering in January of 2015? Itâs possible, but the means and prior efforts are meaningless because someone inside Wizards of the Coast champione the idea to make a new art book, the first of its kind since 1998. 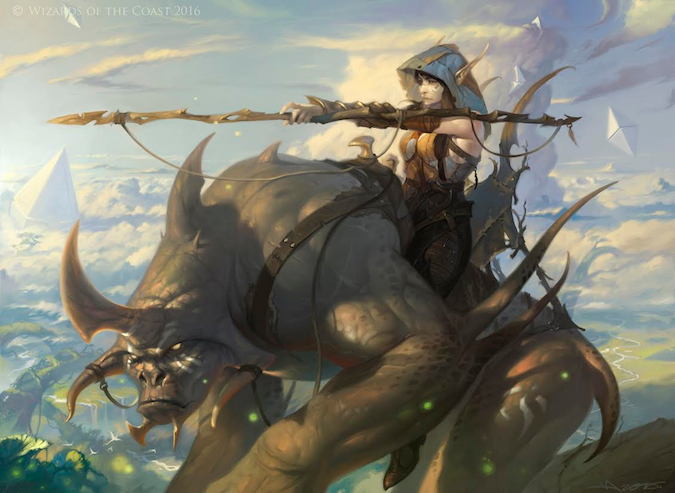 Whatâs is the book? Good art?

I would argue itâs more of a style guide than an art book.

Art books tend to show the process of art creation, assuming the readers knows what the final product looks like in its completed form. Artists then sometimes comment on what they were thinking to trying to do with their concepts. Itâs scanned pages of rough paper, napkin thumbnails and shows from concept to final form and the journey to get there. Yes, there are art books made just with final art forms but those are more exhibition catalogues like a museum or gallery would create.

Mega art book collectors find art books without sketches, rough color sketches or conceptual pieces to be too curated. We can compare this to art of video game art books which vary from four-hundred page tomes, showing insight from art to rough ideas covering a page to highly curated, brand approved images. Below, youâll see an excerpt from the Planeswalker Guide to Alara, which is closer to an art book, yet still a highly curated and written guide. 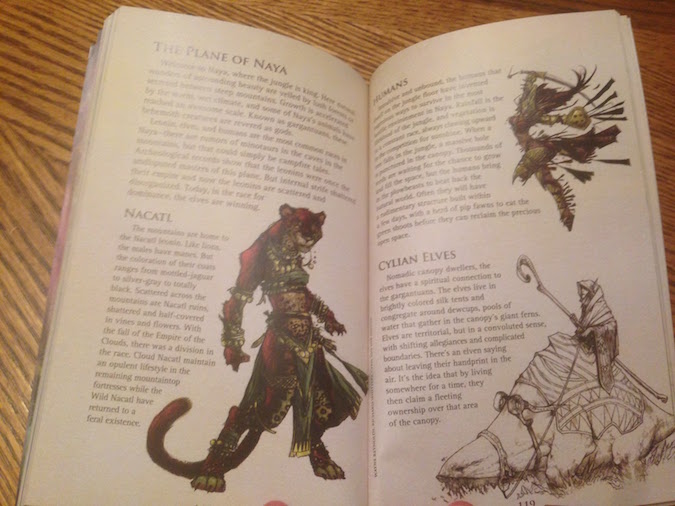 The best art books are large, heavy, colorful and written by an actual member of the world building art team that worked on the game, movie or creation, and filled with artist commentary on the process. The art books that transition from image to image and have very little are really of low value because it assumes the reader wonât take the time to ingest all the information except the finished art. When you see a full page of just turnarounds for characters or weapons with no words on the page, itâs because someone stepped in to make it more âreadable.â 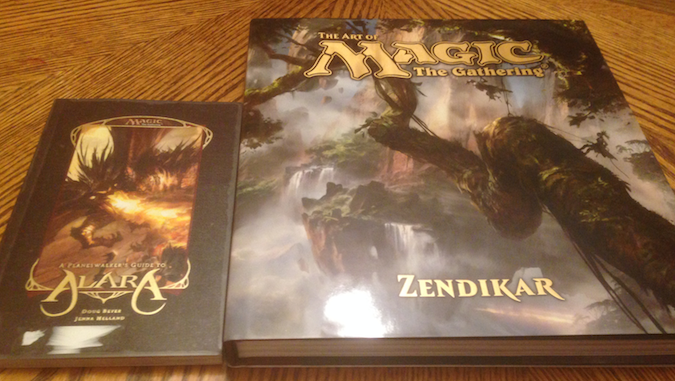 The sheer scale of the new book compared to the last style guide publication is sizable.

Style guides conversely are meant to be reference guides. Sections are clearly delineated, information is categorized and the roughness or conceptual insight is generally removed because it isnât canon. Internal style guides are given to creatives to make a completed, finished product or license and those inform public products like this Zendikar book. Information needs to be thorough, easily searchable and formally written. Artists can write style guides, but their commentary or personality shouldnât show through. These are tomes of the final destination vs. art books being visual journals of the journey.

The Art of Magic: the Gathering: Zendikar isnât an art book, itâs a style guide.

How it differs from the official style guides given to artists and freelancers is that the conceptual world is completed vs. a work-in-progress. In internal style guides, there are contradictions and incomplete ideas. This book on Zendikar is anything but incomplete, itâs a masterful reference guide.

Whatâs in the book?

There are five major sections, containing everything from world building information like Tazeem and Ondu with locations to who lives there and more importantlyâespecially in the case of vampiresâwhy theyâre there. If youâre a shrewd Vorthos, youâll be looking for why the surrakar werenât in Battle for Zendikar, if Valakut is a mountain range or a single volcano and any returning lore elements from the In the Teeth of Akoum novel.

The sections, in order are:

The last appendix is writing from head designer Mark Rosewater explaining a few concepts and tidbits missing from the book like what allies were called in the design phase and where they began after the first Zendikar block.

Most notable in the book is the sheer size of artworks. There are both small works, inset artworks, full pages and two page spreads. To understand the importance of a 10 inch by 11â book, below youâll see an Alpha artwork and how small they all were due to the printer in 1993 being rather small. 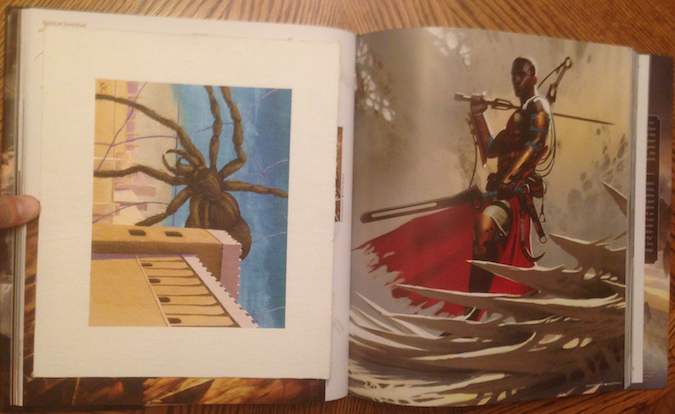 What isnât in the book?

The Eldrazi titan and her brood is described in an encyclopedic fashion but where she is or what sheâs doing is absent from the book.

As the original design plan was to have each Eldrazi titan to get a set, when three sets became two, she got squeezed out. This leaves us with at least two options, either she is the best held secret in years in Oath of the Gatewatch or she is off plane. Iâve been a rather public proponent that Emrakul is on Zendikar and will be in Oath of the Gatewatch. My logic is twofold, Chekhovâs Gun is a very real game design concept of teasing without fulfillment, but there hasnât been a tease. I also think Emrakul would be the wow factor, proving a hidden facet could be held and somehow worked into a set in 2015, with mythic card counts, numbering and rapid internet information sharing. With expeditions being revealed, all the mythic slots being full and the chance of us seeing Emrakul being nearly zero, the opportunity for an Emrakul card to sneak into the set as a secret mythic, expedition or prerelease/release promo card would be absurd for set hype.

Maps are just not part of world building efforts anymore. As they arenât needed to make sets, they force a narrative and scale which is limiting. While they could be used in some areas of Ravnica, trying to name where the Dimir or Gruul reside is a near-impossible task.

Seeing any process shots of the artists making the art or working through concepts is utterly absent from this book. The first art book was quaint, showing some images that never made it onto cards and the concept art team of Pete Venters, Ant Scott Waters, Mark Tedin and Anson Maddocks take unbridled creativity into making the Weatherlight. It worked then but few comparables existed for games to showcase their art and world building efforts. 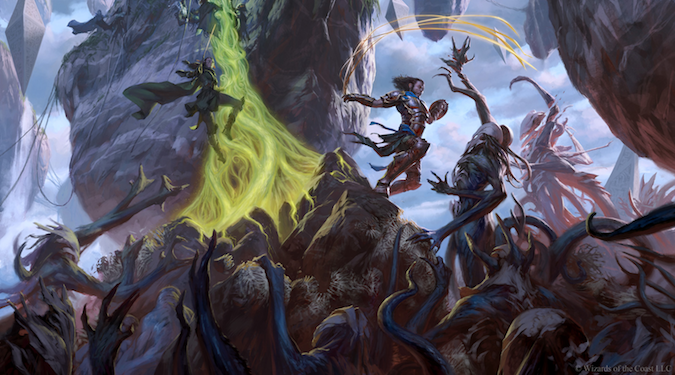 Is the book good?

To say it isnât good needs comparison of what makes a good art book.

The previous iteration, The Art Of Magic The Gathering was really a concept art book for the Weatherlight Saga, with some style guide snippets of world building information and a few full page images of art. This new art book of Zendikar has no sketches, roughs or concept art turnaround images. Itâs cleaner, more polished and seemingly, more brand approved. Itâs also a massive four pounds worth of book!

The expectations for this first iteration are pretty low, considering the amount of time since the last version. That said, since most diehard vorthoses preordered this book, regardless of quality, there will be sales and some happy customers because they just want something.

The book is written by James Wyatt, a talented member on the storyline side of Magicâs creative team, who started at Wizards of the Coast on the Dungeons and Dragons side. The man can write and he consciously chose to write for breadth and depth where he could.

Who would want this book? 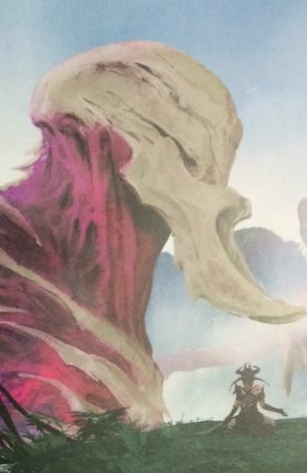 If you have a coffee table and near zero geek shame, you should already own this. Itâs hefty and the beautiful cover by Adam Paquette begs to be opened and paged through. Why itâs so large is the amount of full page artworks. Itâs lovely to see both major cards get art blown up but also minor cards with major art

If you have any other art book from any video game studio, you will want this. Itâs rather enjoyable from my obviously biased opinion at best, and has pretty pictures that are fun to page through from time to time at worst.

If youâre an aspiring Magic artist, working on smaller TCGs or even an art student, you will want this. Yes, the art is huge and you get to see brushstrokes but more importantly, you get to read why the land behaves like it does or why the vampires look differently than other vampires. Having the rationale on everything on the plane can help your own efforts from character design to speed painting of environments.

If youâre looking for a gift for your spouse who plays Magic, this is a fantastic Valentineâs Day gift if they donât have it already. Itâs not mega expensive, itâs fun and if someone doesnât have it, itâs a nice surprise.

If you are on the fence about this book, but youâre more of a Ravnica fan, buy this. The more that are purchased, the higher chance they will keep making these books. Theyâve committed to one on Innistrad but that is it thus far. I hate to be a shill, but only sales will keep these being made. The original art book in 1998 sold terrible. It wasnât massive and advertising was minimal. This time, the product is quality, will we respond by buying them? Itâs already the #1 book on Amazon for Card Games on the first day of release, and I donât see it dropping down within a week or two.

That said, at over 200 pages, this is well worth the sticker price as an art book, which are $30-50 easily and only have art. This has full style guide information within it, a full Uncharted Realms story and never before seen images of the Eldrazi. James Wyatt skimmed no topic of Zendikar, if there is a reference, he covers it with a paragraph or more in the book.

Itâs a great book and I look forward to referencing this style guide masquerading as an art book for years.