There were sixty-six Islands in the Top 8 of Pro Tour Theros. Sixty. SIX. I thought blue would make a comeback in post-rotation Standard, but this went way beyond my expectations. I think I just blue myself. Devotion proved itself to be a major player in Dublin, and it will be interesting to see how the format evolves. If youâre looking for a deck to play at your next Standard event, I have you covered.

One thing to keep in mind is that Pro Tours are dual-format, so the âTop 8â decks werenât necessarily the best-performing Standard decks. I know this firsthand since at Pro Tour Nagoya, my own results were fairly bi-modal. Someone can do really well in one format and really badly in the other, as I did (retweeted by Humblebrag). For that reason, Iâll be working with the decks that went 6â4 or better and will be highlighting the best of these, whether or not they made Top 8. Hereâs what that composition looks like: 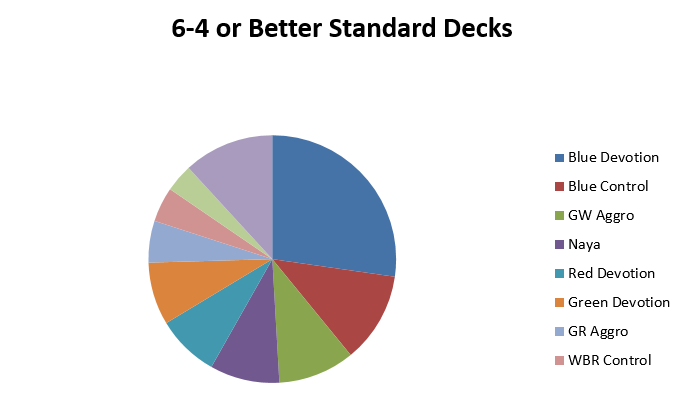 Blue-based devotion decks claimed a whopping 27% of the best-performing decks. Incredibly, six players had an 8â2 record with the deck, one of whom was Jon Finkel. Letâs look at his list:

Finkelâs list is identical to the one Sam Black finished third with. This deck aims to maximize the effectiveness of Master of Waves and Thassa, God of the Sea by playing cheap creatures that have as many blue mana symbols as possible. Hybrid-mana creatures help out a lot here, especially Nightveil Specter, which increases your devotion by 3 with a single card. Bident of Thassa is a natural fit in a deck like this, and itâs only fitting that the Shadowmage Infiltrator himself would be playing the card. And while this isnât the most abusive use of Nykthos, Shrine to Nyx (more on that later), this deck is still capable of doing some gross things with the newfangled Tolarian Academy. Usually, youâll just be making your whole team unblockable, but occasionally, youâll be surprising your opponent with an overloaded Cyclonic Rift out of nowhere.

The true power of this deck comes from Master of Waves. If your opponent canât immediately deal with it, youâll often be sending lethal damage his way the following turn. The fact that it has protection from red makes it absolutely backbreaking against the mono-red decks. Combined with the four main-decked copies of Tidebinder Mage, the assured popularity of deck means youâll have an extremely hard time convincing me to sleeve up Mountains in the near future (in Standard anyway). Because of how dominating Master of Waves was at the Pro Tour, you should expect a lot more hate cards going forward. Golgari Charm in particular seems to be a great tool against this deck.

While Iâve certainly played my fair share of Fish-style decks, there are few things I enjoy more than an old-fashioned blue control deck with card-draw, counterspells, sweepers, and almost no creatures. Guillaume Wafo-Tapa (or, as I call him, Billy Waffles) brought sexy back with his take on Esper control:

This was actually the best-performing deck in the Swiss rounds, as though you needed more proof of Wafo-Tapaâs mastery of control decks. The game plan here is to trade one-for-one with your opponentâs best threats and pull ahead with cards such as Sphinx's Revelation and Jace, Architect of Thought. Aetherling and Elspeth, Sun's Champion both end the game quickly once you have assumed control. This deck also plays eleven cards that scry 1, making it more likely that youâll have the right tool for the job, although with universal answers like Detention Sphere and Hero's Downfall, itâs like finding the right breed of bull to rampage through a china shop. Wafo-Tapa only has three copies of Dissolve as counterspells, so this is really more of a tap-out control deck rather than a traditional permission control deck. Again, because Aetherling and Elspeth are such resilient threats, there will rarely be anything your opponent can do about them. Even if the opponent does have a Hero's Downfall of his own, you either got three Soldiers or a Wrath of God out of the deal.

I do think that the mana is a bit sketchy because there are so few lands that enter the battlefield untapped for free. Having a one-sided Ankh of Mishra in play can make things more difficult against aggro than you might like, hence the large amount of removal. If Burning Earth makes a comeback, this deck is in deep doo-doo. The closest Wafo-Tapa came to losing during the Swiss was an unintentional draw against Jeremy Dezani playing mono-blue devotion. Seeing as Wafo-Tapa lost to the same deck in the quarterfinals, itâs easy to speculate that the deckâs weak point is Thassa and friends. Game 1 against mono-blue is good, but the sideboard turns the tides back in its favor. On a side note, how insane is it that the only two people Wafo-Tapa didnât beat in Standard finished first and second?

Iâll definitely be keeping an eye on how well this deck does on Magic Online. And now for something completely different:

Hall of Famer Rob Dougherty piloted this list to a 7â3 finish. You can check out the official deck tech here. While not necessarily the best-performing aggressive deck at the Pro Tour, it was certainly the most popular. This deck existed in some form pre-Theros and it receives some goodies from the new set. Soldier of the Pantheon is making a strong case for being the âbest Savannah Lion ever,â and Fleecemane Lion is a nice, strict upgrade to Watchwolf. Boon Satyr gives the deck a lot more flexibility, as it allows you to play around your opponentâs sorcery-speed removal. Compare it with Wolfir Avenger, a card that played a similar role in the past, and you see how powerful it really is.

Together with Advent of the Wurm and Rootborn Defenses, this deck has a lot of resilience against control decks. It kind of needs it, though, as Anger of the Gods is the best tool to fight Voice of Resurgence right now, and it happens to kill many other creatures in this deck as well. If you do pick up this deck, donât let yourself be blown out against a red control deck (like B/R control, for instance). Doughertyâs deck is different than most other G/W lists in that he plays main-decked Trostani, Selesnya's Voice. I agree with him that it was a good metagame call for the Pro Tour, but you should reevaluate whether itâs warranted in your expected metagame. If you expect a lot of creature mirrors and red decks, by all means, leave it in, but itâs not so great against control decks since they have sweepers and spot removal.

Speaking of red decks and Hall of Famers, letâs look at the so-called âPrerelease Redâ:

The coverage team kept repeating the following story: Kamiel Cornelissen didnât have time to test but hung out at the prerelease with Frank Karsten. Karsten sketched out a mono-red list, and Cornelissen played a few games with it. It was the only deck on him at the Pro Tour, and he just ran it as isâbecause YOLO. Iâm not sure how true that story actually is, but there you have it. Like the mono-blue devotion deck I discussed above, this deck maximizes the number of red mana symbols in its early drops, again by taking advantage of hybrid mana.

Whereas the blue deck had Nightveil Specter in its 3-drop slot, Cornelissen had Boros Reckoner. Oh hey, remember me? Turns out that Boros Reckoner is still a powerhouse; who knew? Of particular interest in this deck are the full four copies of Nykthos, Shrine to Nyx. You would think that a mono-red deck just has a bunch of cheap creatures and doesnât have much use for a ton of mana. Youâd be wrong. This deck has seven monstrous creatures and three copies of Purphoros, God of the Forge to sink mana into. Hammer of Purphoros is also a good one when youâre mana-flooded. Now the twenty-six lands make sense.

Itâs also worth noting that with the new legend rules, drawing multiple copies of Nykthos is actually a good thing and leads to some absolutely disgusting turns. While I was watching the coverage, I heard Brian Kibler talk about how he saw someone make 40 mana in one turn and activate Purphoros thirteen times. I donât think thatâs how a typical game will play out, but this deck is capable of having a lot of devotion early thanks to Burning-Tree Emissary. Based on the hurried nature of this deckâs development (if the Karsten-sketching-out-a-list-on-the-back-of-a-dirty-napkin story is true, that is), that implies that thereâs still a lot room to tune this list. And since Cornelissen achieved an 8â1 record before intentionally drawing in the last round with a supposedly untuned list, the Dutch players may have unwittingly struck gold. Despite all that, I donât think mono-red is the most abusive use of Nykthos.

This is what the Japanese team came up with and is what gave Makihito Mihara yet another Pro Tour Top 8, although I would argue that it had more to do with his undefeated Draft record. My favorite piece of technology from this deck is the seemingly innocuous Voyaging Satyr. Getting multiple uses out of Nykthos in one turn is just disgusting. And like Cornelissenâs mono-red deck, the Japanese devotion deck has many uses for a boatload of mana. Arbor Colossus is gigantic, and I wouldnât be surprised if it started to see a lot more playâitâs really not asking that much to become a 9/9. Polukranos, World Eater is at its best here, as it can eat all but the largest of boards. Nylea, God of the Hunt is an integral piece of the puzzle. The trample it bestows to your creatures is incredibly relevant when your creatures have double-digit power, and just in case you run out of things to do with your mana, you can make your giant monsters even more gigantic.

Completing the package are the nine planeswalkers that ensure you never run out of gas. If this deck has a weakness, itâs that the deckâs a bit threat-light. Most of the creatures are mana-producers that donât attack effectively. You will sometimes see draws in which you have a ton of mana but nothing to do with it, making the four copies of Temple of Abandon extremely important. Mulligan decisions are critically important here. This deck is incredibly explosive and looks like a blast to play, so definitely expect to play against it in the near future.

Those are all the decks I have time to cover this week. Iâll be keeping a close eye on how the Standard metagame evolves on Magic Online, so look for a âPost-Dublin MTGO Standard Analysisâ article soon. Iâll wrap up with my Top 8 Theros Cards (by number of copies played):

Thanks for reading, and Iâll see you guys next week on Thursday, my new time slot.