Hello, everyone, and welcome back to another week of Standard metagame analysis. With Standard being the current Pro Tour Qualifier format and with World Magic Cup Qualifiers being just around the corner, this is an ideal time to familiarize yourself with the format if you havenât done so already. Last week, I looked at the Standard portion of the Magic Online Championship. This week, Iâll be looking at what Standard has been looking like on Magic Online since then.

As usual, Iâm only looking at Premier Events and Pro Tour Qualifiers. Itâs not that I think Daily Events are useless, but most people donât take these events as seriously as they do the other two types of events. Iâm working with a smaller sample size, but Iâll take that sacrifice to find higher-quality data. Hereâs what the metagame looks like using events from March 24 to March 30: 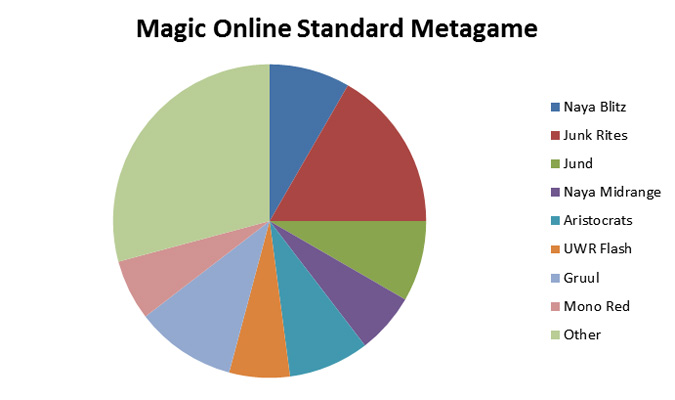 Unsurprisingly, Junk Rites is still the most popular deck, but reports of its oppressiveness may have been exaggerated. On average, there was only one Junk Rites deck per Top 8. A rogue deck, and by ârogue,â I mean a deck that by itself comprises a small proportion of the metagame, is nearly twice as likely to be in the Top 8. In terms of what decks are winning, Junk Rites does better, taking down the whole shebang a third of the time it makes Top 8. The best-performing deck in terms of Top-8-to-win ratio was actually R/W/U Flash with three Top 8s and two wins. You can see how each of the most popular decks performed in single elimination in the table below:

That really shows how much of a success story the new R/W/U Flash deck has been over the past week. And when I say ânew,â I mean the version of the deck that is playing Aurelia, the Warleader. The card is absurdly powerful and is what the deck needed to start closing out games quickly. Impressively, the deck won a PTQ and a Premier Event on the same day with nearly identical lists. Iâll look at the latter one for no other reason than my opinion that sixty-one-card decks are suboptimal by default:

All joking aside, _VFS_âs PTQ-winning deck differs by only a few cards.

Want to know how to beat Junk Rites? So do I, but I bet a good start is with actual hard counters. Between Dissipate, Rewind, Remove Soul (or whatever theyâre calling it these days), and Syncopate, Junk Rites is going to have a hard time getting anything going. Besides the Aurelia, all of the threats come out at instant speed, so the deck is perfectly comfortable playing the âland, goâ game. Rewind usually sucks, but itâs actually decent here since unless you have no cards in hand, youâre almost always going to have a way to use the extra mana. I can see this deck having some issues against the more aggressive strategies in the format such as Naya Blitz and Gruul, as itâs possible to see some pretty awkward draws. You just need to make sure you mulligan aggressively into cheap cards that prolong the game such as Augur of Bolas, Azorius Charm, and Searing Spear. I absolutely love that these players chose to get rid of clunky cards such as Boros Reckoner and Boros Charmâreasons I wasnât a big fan of the previous iteration of this deck. I can see myself battling with something similar to this deck at my World Magic Cup Qualifier, and if youâre a fan of aggro-control decks, this is a good option for you as well.

The next-best-performing deck was easily Junk Rites. In terms of raw numbers, it put the largest number of people in the Top 8 and was second only to R/W/U Flash in the other metrics I summarized above. I wrote about this deck last week, so Iâm not going to explain how the deck works again. Junk Rites continues to perform poorly against Naya Blitz and well against the rest of the field. BigPrads has updated the deck with some neat new technology:

The main-decked Deathrite Shaman and Sever the Bloodline seem as though they would be pretty darn good for the mirror match, which by all indications is a matchup youâll have to face a lot if you choose to play this deck. The singleton Elderscale Wurm in the sideboard is interesting, and I have a hard time imagining Naya Blitz ever beating one. I also really like all of the flashback spells this list is running. Not only do they work well with Liliana, theyâre also insane with Mulch and Grisly Salvage. Junk Rites remains one of the most objectively powerful decks in the format, so if youâre not playing it, youâd better be prepared to play against it. One way of doing that is by playing a faster combo deck. Iâm speaking, of course, of Naya Blitz:

The main deck is card-for-card Jorge Pinazoâs list from the Magic Online Championships. As Iâve said before, this is a high-risk, high-reward deck. Your success or failure hinges on your opponentâs ability to interact with you. Any deck that is chock-full of cheap removal spells can give Naya Blitz a hard time. Still, if you like mindlessly attacking, this is the deck for you. Make sure you mulligan aggressively and hope that you draw better than your opponents. Gruul is another possibility if you like this style of deck. Itâs similar to Naya Blitz in many ways, as it plays many of the same cards. It sacrifices some speed for more consistency. It performed a bit worse than Naya Blitz, but itâs still worth considering.

The only other deck that did well last week was Jund, but I canât recommend it in good conscience. With Junk Rites being so prevalent, the only ways you can win a tournament with Jund is if you somehow dodge this matchup, get really lucky, or both. If Junk Rites didnât exist, Jund would probably be the best deck in the format, but as they say, if wishes were horses, beggars would ride. If youâre a die-hard fan of the deck or if youâre really confident in your ability to beat Junk Rites, by all means donât let me stop you from playing it. Just be aware that Junk Rites is adapting to Jundâs main-decked answers, so donât think youâre safe behind that Ground Seal.

Any of these decks would be a good choice to take into your local Standard tournament, whether itâs a Pro Tour Qualifier, a World Magic Cup Qualifier, or just Friday Night Magic. Be sure to practice as much as you can, and keep your eye on Magic Online for the latest technology. Good luck in your tournaments, and Iâll see you next time.