You and your friend Mike canât agree which block was betterâScars of Mirrodin or Innistrad? You love the metal plane and its artifacts while Mike has a soft spot for bloodsucking fiends. You decide to pit your Block Constructed decks against one another to determine once and for all which block is best.

Youâre at 6 life with two Swamps, two Forests, and a Mountain untapped. You control Glissa, the Traitor, an unattached Mortarpod, a Rage Extractor, a Shrine of Boundless Growth, a Shrine of Burning Rage, and a Throne of Geth. Your graveyard contains Perilous Myr, Phyrexian Metamorph, Sylvok Lifestaff, and Vulshok Replica.

Mike is at an even-more-precarious 4 life. He controls Falkenrath Noble, Soulcage Fiend, three Swamps, and one Mountain, all tapped. His only untapped permanent is a Markov Patrician.

It is your first main phase. Win this turn.

Send your solutions to nex342+puzzle at gmail dot com with the subject line âPuzzle â Block Battleâ, and Iâll include the best ones in next weekâs article along with the next puzzle! 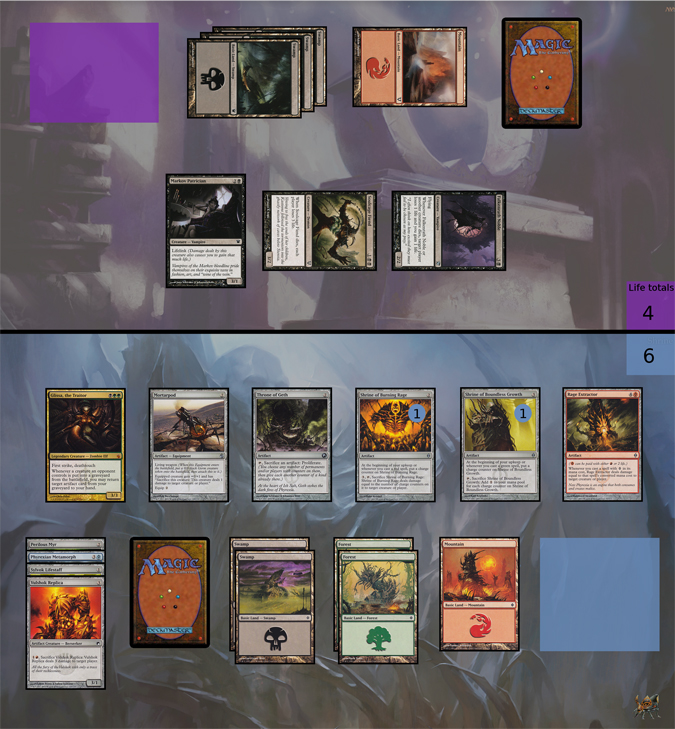 Selesnya and Azorius were the fastest guilds, winning the game turn three on the play. Bill Cheng sent in the first solution for Selesnya:

Mana Bloom with X set to 0

Ryan Nightingaleâs solution for Azorius is the same except it omits Mana Bloom and uses Judge's Familiar rather than Dryad Militant.

Ramsey Stephan sent in this solution for Golgari, winning turn four on the play:

Matt Kersus sent in this solution for Rakdos that also won on turn four on the play: