Magic is a game of numbers: sixty cards, 20 life, draw two cards, take 7 damage, and add three counters. There are even more numbers surrounding the gameâfacts and figures, prices and trivia, they are everywhere. In Affinity for Numbers, I uncover and highlight some of the more interesting numbers in Magic.

StarCityGgames Open Atlanta featured ten Megamorph decks in the Top 32, including four of the Top 8 and a mirror match in the finals. Six of those decks were G/W, and four more added blue for some countermagic, including Stratus Dancer. Here's the winning G/W Megamorph deck:

With two tournaments in the books, Abzan Aggro is once again at the top of the metagame. 22% of the top decks so far have been the more aggressive variant of Abzan. Jeskai Black is the only deck close to being as successful, with 14% of the top spots at SCG Open Indianapolis and Atlanta.

Battle for Zendikar has brought with it near-perfect mana, and that means decks of many colors. 25% of the Top 64 decks at SCG Open Indianapolis and SCG Open Atlanta played four or five colors. That number jumps to 77% when you include three-colored decks. Almost as many decks were four-colored (19%) than two-colored (21%). By comparison, only 2% of the top decks from major tournaments over the entire Theros/Khans of Tarkir Standard metagame played four or more colors.

The âUltimate Sacrificeâ Battle for Zendikar event deck has some pretty valuable cards in it. Hangarback Walker is over $11, Warden of the First Tree over $5, and Whisperwood Elemental and Tasigur, the Golden Fang are both right around $3. The whole deck is worth just under $50 and retails for $25.

Jace, Vryn's Prodigy has been popular since the release of Magic Origins and remains so in the new Standard. It was a $19 card on Magic Origin's release date and $50 at the beginning of October, and it has shot up to about $73 recently. The card has found a home in about a third of the top decks in Khans of Tarkir/Battle for Zendikar Standard, and along with dual lands, it is really driving up the cost of Standard early in this season.

Green was played in 60% of decks from Theros/Khans of Tarkir Standard, second only to white, and green looks to be increasing in popularity so far with Battle for Zendikar. Green has been played in 84% of the top decks so far, including two of the top three decks: Abzan Aggro and G/W Megamorph.

Dig Through Time will be banned in Legacy and restricted in Vintage starting on October 2, 2015, just over a year after being released in Khans of Tarkir. It was banned in Modern back in January after only one hundred nineteen days of legality in that format. Check out more on the September banned-and-restricted-list update here. 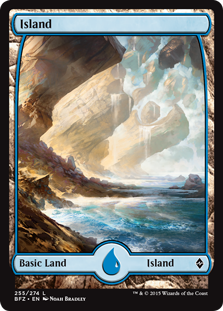 Let's say you really like the Zendikar Expeditions and want a play set of each cardâhow much would it cost you? Thatâd be more than a lot of used cars and more than the average one-year tuition at an in-state, four-year public college. Polluted Delta, Flooded Strand, Misty Rainforest, and Scalding Tarn each will set you back about a grand for a play set.

Thoseâre all the numbers I have for you today. If you also have an affinity for numbers and have one you think I should share, let me know on Twitter @MrVigabool.