The Standard metagame has been diverse and competitive since rotation. There have been top decks, but nothing at Delverâs level of dominance last year. Several different deck archetypes have taken a turn at the top, claiming the title of âbest deckâ for a few weeks before being replaced by another. There have always been multiple good options to take to a major tournament, however, and Top 16 fields have been diverse.

In this article, Iâm going to examine four of the top deck archetypes in the metagame today. Iâll review their statistics of success: the number of Top 16 appearances in the last month, the Top 16 trends over recent major tournaments, and the percentage share of 4â0 and 3â1 decks in Magic Online Daily events over the last two weeks. Iâll also provide a look at what cards are played in the Top 16 decks of each archetype and how frequently to give you an idea of what to play or to be prepared to play against.

Letâs start with a glance at the decks with the most Top 16 appearances in major Standard tournaments over the last month. 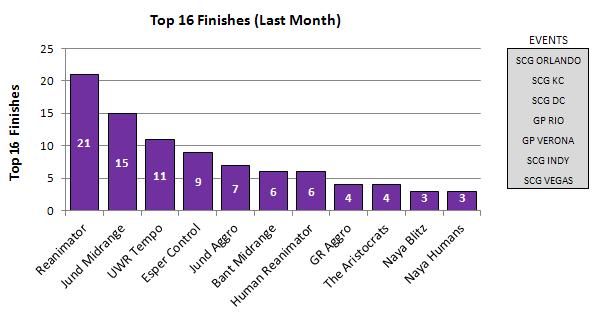 Reanimator has officially taken lead from Jund Midrange, a trend that has been quite clearly developing for several weeks. Iâll take a deeper dive into some of these decks, starting at the top.

The Deck to Beat 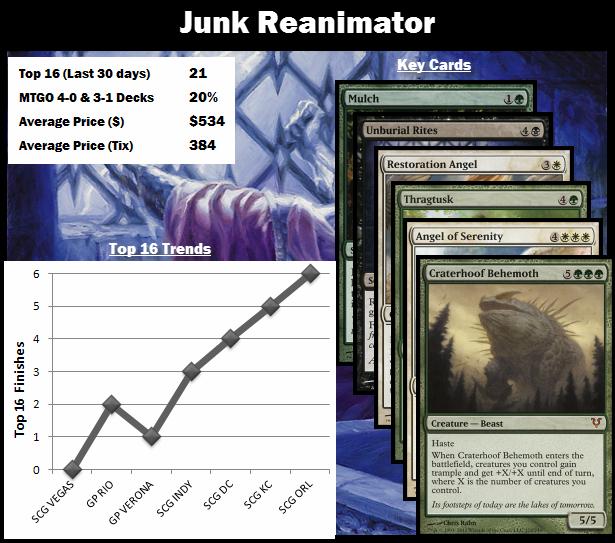 Reanimator has been a contender in Standard off and on since rotation. It saw a strong resurgence the weekend of March 9 with six total Top 16 appearances in three major tournaments: Grand Prix: Verona, Grand Prix: Rio, and StarCityGames Open: Indy. The trend has continued upward from there.

Reanimation is plan A for the deck. The idea is simple: Filter through your library using Mulch and Grisly Salvage, discard Unburial Rites and a big, powerful, and usually quite expensive creature, and then flash back Unburial Rites to bring said creature to the battlefield several turns early.

Plan B is the Junk Midrange option. The deck plays effective midgame creatures such as Thragtusk and Restoration Angel and plenty of mana-producing creatures to bring them out a turn or two early. Many Reanimator pilots sideboard into Plan B if they smell graveyard hate coming in Game 2, making an opponentâs Rest in Peace or Ground Seal fairly useless.

Here is an example of a recent Top 16 Junk Reanimator list:

The following charts include every card played in Top 16 Reanimator decks over the last month. The % Decks column indicates how frequently the card is included.

Angel of Serenity and Craterhoof Behemoth are the reanimation targets of choice with the occasional Griselbrand included. Weâve seen a couple Gatecrash Primordials take a turn as well: Sepulchral and Sylvan. Lotleth Troll is gaining in popularity as a blocker for Burning-Tree Emissary and other early aggressive creatures, and itâs also a reasonable threat against slower decks.

To Lingering Souls or not is the main question. The card is frequently boarded out when switching to the midrange plan, and some pilots elect to skip it all together.

This MTGO deck played a pair of Garruk Relentless in the main. This allows you to beat Garruk, Primal Hunter onto the table when playing Jund Midrange, forcing the opponent to remove it or trade Garruks by playing his own. Plus, you make a Wolf out of the deal. Itâs also reasonable removal against many of the aggro decks in the metagame and helps clog up the board and stall if needed.

Slayer of the Wicked

Sepulchral Primordial is only 19%, but itâs on its way up. It is worth noting that three Reanimator decks played one to two copies each in their sideboards in Orlando, and itâs a fine option against other Reanimator decks. The only thing better then depriving an opponent of being able to reanimate his Angel of Serenity is to steal it from him altogether! 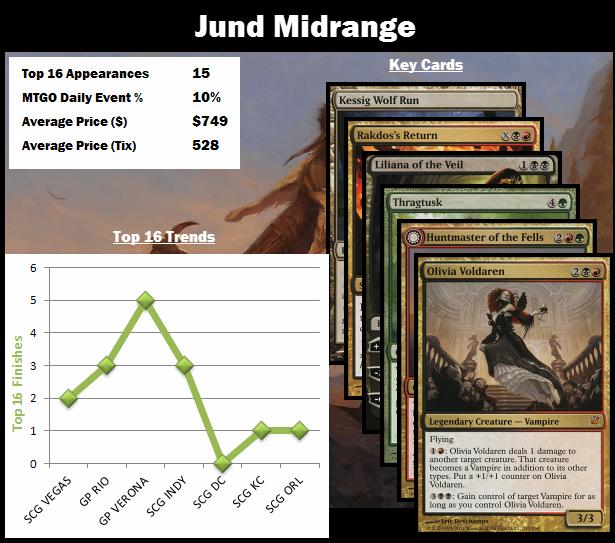 Jund Midrange is another deck thatâs been around since the early stages of the metagame. It surged back to prominence at GP: Atlantic City in mid-January with four Top 16 appearances, it had five in SCG Open: Atlanta in early February, it had six in Quebec City later that month, and then it had five at GP: Verona a few weeks back. It has since passed the torch to Reanimator, but is still a contender.

Here is a sample deck:

Arbor Elf is closer to 100% for the most recent tournaments, acting as Farseek numbers five and six. Vampire Nighthawk is a great defender against aggro and gets along well in the Cavern of Souls with Olivia, though it has seen less play now that Reanimator is the deck to beat.

A trend on MTGO, where Reanimator is the dominant archetype, is to move one to two Ground Seal to the main deckâsee this deck as an example. It shuts down Unburial Rites and Snapcaster Mage and limits the effectiveness of Angel of Serenity, so it has applications against several decks in the metagame. Itâs also a cantrip, so it replaces itself. Iâm not sure it is main-deck-worthy, however; that probably depends on how much Reanimator you expect to face.

There are several archetypes that have had multiple Top 16 appearances recently. Iâll take a closer look at two of them. 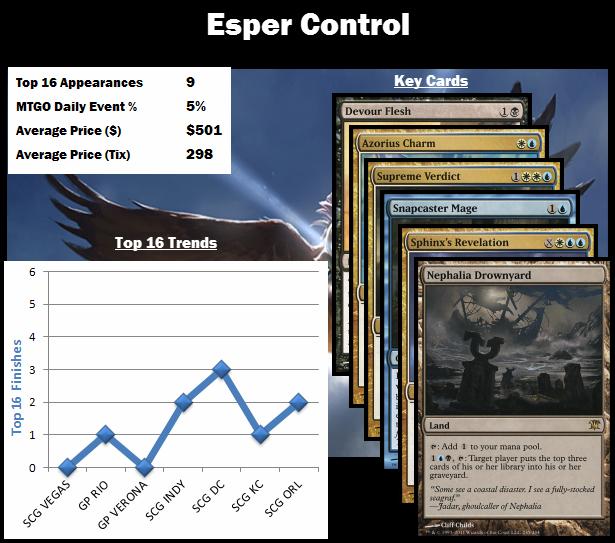 Esper has replaced Bant as the most successful control deck since the release of Gatecrash. The deck aims to stall using its control elements and eventually restock and stabilize with Sphinx's Revelation. A primary win condition is through mill with Nephalia Drownyard and sometimes Jace, Memory Adept. Esper Control decks sometimes play Restoration Angel, Obzedat, Ghost Council, and Jace, Architect of Thought as additional win conditions. For more Esper analysis, check out Max Sjoeblomâs maximum control version in his article from last week.

Here is a sample deck:

The deck plays very few creatures. Snapcaster Mage and Augur of Bolas are effectively âother spellsâ that can block and sometimes grind an opponentâs life total down if mill doesnât get there first. Obzedat, Ghost Council is another win condition option. This deck on MTGO included a single copy of Drogskol Reaver as a finisher.

There is a high degree of variability in Esper Control spells, and pilots choose removal and countermagic that best suits their expected metagames; thus, there is a long list of spells in the 20% to 80% range.

Esper Control sideboards have seen a bevy of additional control options along with some graveyard hate for Reanimator matchups. Psychic Spiral has taken Elixir of Immortalityâs old job, making sure you arenât milled outâor just run out of cards in a long gameâand resetting your draws. It also has the benefit of helping out the mill plan. 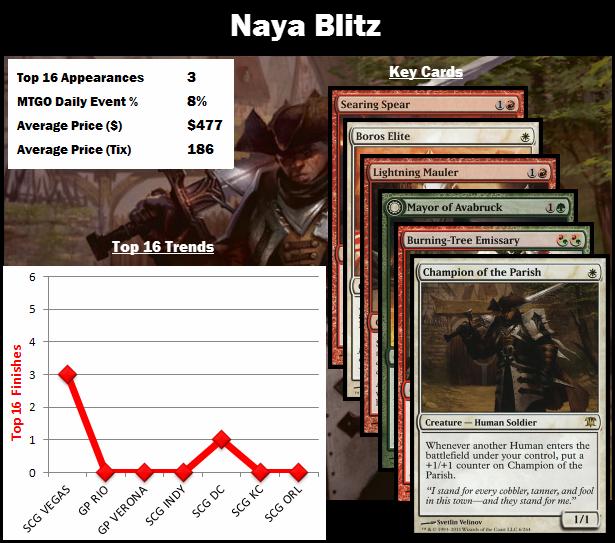 Naya Blitz is a true aggro deck. It plays twenty lands, well over thirty cheap and aggressive creatures, and Searing Spear for burn. It has a low curveâthe average mana cost of the main deck is 1.85âand it can get off to some very quick startsâ.â.â.ânot to mention finishes. The deck has not seen as many Top 16 finishes as the others on this list, but it is fairly prevalent on MTGO already, and its speed is something to take into consideration when planning and testing. Check out this example of the archetype.

There isnât much variation in cards played in the Top 16 Naya Blitz decks; most are at 100%, so we have to look to Magic Online to find some alternate ideas. This deck includes Fiend Hunter for additional removal and Brimstone Volley for more burn. This one plays Wolfbitten Captive over Flinthoof Boar (keeping Experiment One) as a better mid- to late-game play and place to sink mana. It also moves Thalia to the sideboard in favor of the more explosive Hamlet Captain. This deck includes Firefist Striker for more battalion fun.

Champion of the Parish

Flames of the Firebrand

There are a number of viable competitive decks in Standard; these are just four of them.

Best of luck brewing decks and playing games; Iâll be back next week with a look at the SCG Open and Invitational Standard decks in Atlanta. Thanks for reading!