After covering a number of topics involving foreign and foil cards over the past few weeks, we finally come to my favorite part of the pimp market: miscuts and oddities. Similar to the foreign foil market, oddities have an undetermined price range that can only be derived from great amounts of research. Unlike foreign foils, however, this market does not always have precedents for each card in each scenario. This is the most unique market in existence, and for that reason, itâs also among the most dangerous. I donât suggest this market for anyone but the most experienced floor traderâand even then, only with great caution. With such a vast market, it was difficult to decide how to start this article.

After some thought and time looking back, I decided to start with what is considered the most common of misprintsâmiscuts. I am sure almost everyone has, at some point, seen some sort of miscut. Back in the early days of Magic, it was very common to have cards off-centered, and most people thought nothing of it. In the modern days of Magic, itâs far less common to see cards miscut or off-centered, so the likelihood of opening one from a pack is slim; however, these cards do still exist. This, of course, means that you need to be careful when dealing with older productsâ miscuts because of some common print errors of the day. So, what makes a particular miscut worth money? What allows me to derive a price point from a piece of cardboard unlike any other? The answer is not a simple one, but given enough information and research, obtaining a price is within anyoneâs grasp.

The first aspect you should be looking at is how severe the miscut is. The biggest question is: Can you see another card? This can make or break the value of almost any miscut, taking what could have been $15 and putting a much higher, one-of-a-kind price tag on it. If you canât see another card, itâs likely that the card holds a value only slightly higher than the actual value of a regularly printed version. 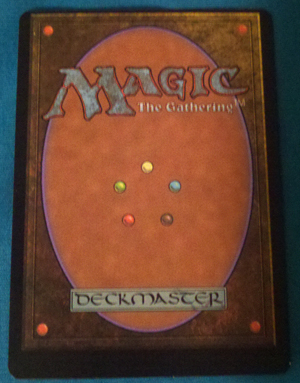 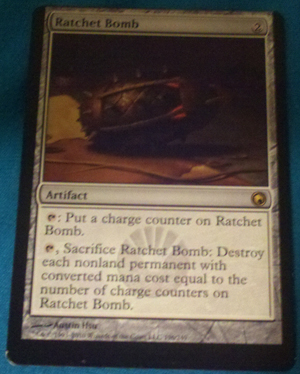 The above pictured Ratchet Bomb would have a value of between $10 and $15, given the fact that it sees a fair amount of play in Standard while at the same time being a playable card in Eternal formats. Unfortunately, the miscut is not deep enough to show another cardâotherwise, the value would be significantly higher. In this case, letâs assume we could see the border of the next card on the sheet. We would then be looking at a card worth $50 or more dollarsârather than the $10 itâs actually worth in this condition. It amazes people how much the cut matters, but it can be the difference between a paycheck and a gold mine. 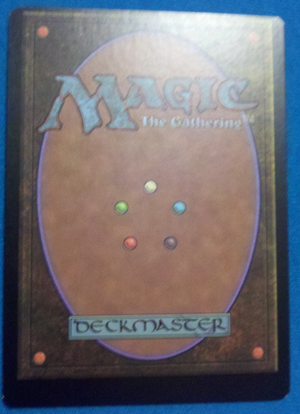 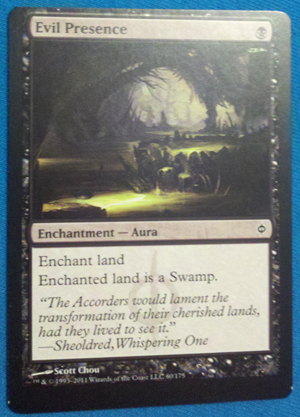 The fact that a card is off-centered does not mean the card is worth anything. In the case above, we have a card that looks cool, and itâs something I still include in my miscut binder, but at the end of the day, it has no real value. If anyone was seeking a card like this, Iâd likely attempt to get a few bucks, but in reality, the cardâs value is close to nothing because of its lack of playability. 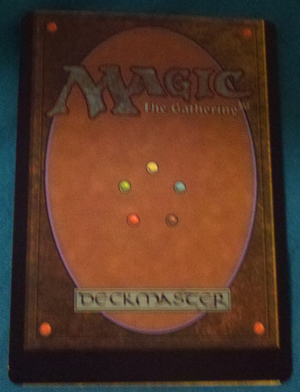 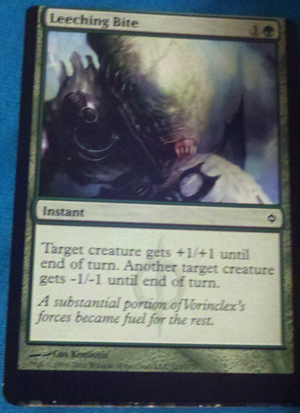 Compare this card to the one above and you can see just how important the depth of the miscut is. This card, just like the one above, is relatively unplayable. Unlike that one, we can see the next cardâs borderâmeaning this card actually has value. Now, determining the value is a different story in cases like this, but given some time and research, it can be done. The best way to find a price comparison is by scouring eBay constantly in order to find a similar itemâthen see what that item sells for. I keep a spreadsheet of any rare or interesting piece that goes for a reasonable price on eBay in order to allow my future purchases to be easier to identify. In this case, Iâd consider the Leeching Bite to go for between $5 and $10 at best, given its fringe playability. If this were a playable rare such as the Phyrexian Metamorph that just went on eBay, we could easily see a price tag of $50 or more with nearly the same depth of cut. 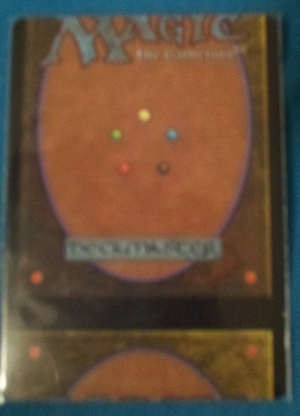 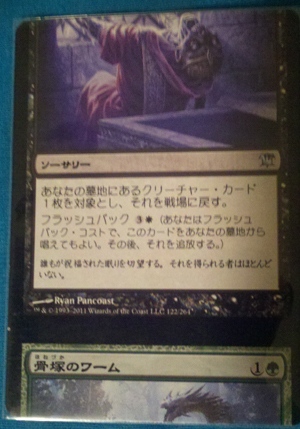 Unlike the above two examples, this Boneyard Wurm represents the pinnacle in one-way miscuts. Having such a deep cut can make even the most worthless card gain value in the $10 to $20 range. This Boneyard Wurm is unfortunately cut in such a way that the Unburial Rites is not actually what this card is playable as, but nonetheless, this card does hold a great deal of value. Given the deep cut and foreign language, I have seen cards of similar qualities go for as high as $70. In this scenario, if I had to place a realistic value on it, I could see it being in the $40 to $50 range. If this card was the Unburial Rites its art teases us with, it could easily be closer to $100, given the cardâs playability in both Standard and Commander. Learning how to evaluate miscuts is very similar in the way that you evaluate foreign foil cards. Language is similar to cut, and playability makes the price vary on a similar scale. Learning how to master this process takes a great deal of research and dedication, but getting the basics down is as easy as taking a quick look through eBay.

The next type of miscut is one seen less commonly than the above examplesâthe side-to-side cut. Although I can neither confirm nor deny the actual rarity of these two miscut types, I see the other type far more, and therefore in my experience, I value the side-to-side higher. The same rules apply as the above cards, but with a small boost in the price for rarity. Overall, I wouldnât go crazy valuing this type of cut at a much higher price, but from the research I have done and the data I have collected, it seems that they do fetch a 10% to 15% margin over the top-to-bottom cuts.

The next type of miscut Iâm covering today is the square-corners cut. I see these far more often than any other miscuts, and because of that, I donât value them much higher than regular versions of the card. This scale naturally varies based on the rarity of the card, foiling, and language, but overall, I donât put much of a premium on square-cornered cards. Some judges frown on these in competitive playâeven on the FNM levelâmaking them a difficult sell. When a card is banished to the Commander bin, it doesnât fetch much of a premium unless you find just the right buyerâwhich can prove to be extremely difficult. I have also heard of people cutting up sheets won at tournaments and pawning them off as square-cornered cards, making me even more hesitant to pick them up when I see them. Overall, this entire category is the black sheep of the miscuts market, and theyâre something I make a general rule of avoiding. 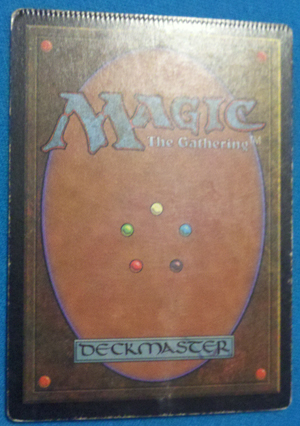 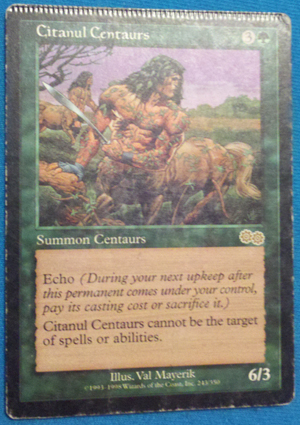 The last type of miscuts Iâm going into detail about this week are crimped cards. Though they can prove to have a similar issue in tournaments as square cards, itâs far easier to pass a crimped card off as playable. I would still check with the head judge before attempting to play one of these in a sanctioned event, but I have had no issues in the past. Crimped cards follow a similar scale as miscuts when it comes to pricing. Take the above card for example; itâs relatively unplayable, but it still has value because of how deep the crimp is. I wouldnât expect to obtain much for such a card, but asking for $5 to $10 would not be unreasonable. 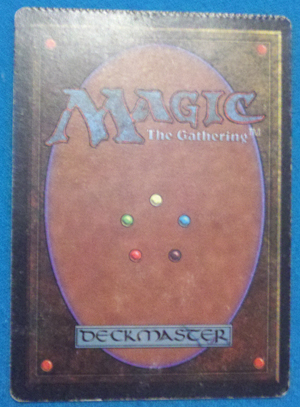 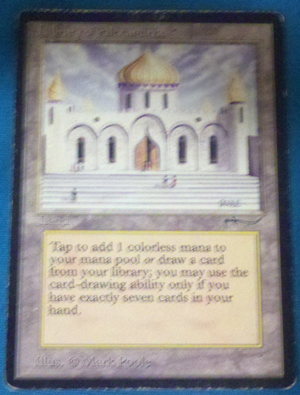 Now we are dealing with a card that is already worth a great deal of money on its own. Unlike all of the previous examples, one-of-a-kind Vintage cards can fetch a ton of money if you can find the right buyer. This is one of those scenarios in which even I cannot set a price pointâI have no previous cards to base it on. If I had to guess, Iâd put this between $300 and $350 because of the condition, which unfortunately is extremely poor. The key to cards like this is to wait until you find the right person who both is a collector and has a deep pocketbook. Unfortunately, that makes cards like this a very difficult sell, but if you can acquire them cheap enough, it can be a hefty payday when you do. I donât know that I will ever find a buyer for this Library, and given how unique it is, thatâs fine by me. Having cards like this in your binder not only creates profit, but conversation.

To wrap things up, I will paraphrase what one of my friends said a few weeks ago in regards to foreign foils and oddities: âIt's like once I open one of your binders, all of a sudden, Iâm trapped in some crazy shiny Japanese orgy.â This is why we deal in the cards we do. How many people want to give value to the guy who runs an eBay store with Standard cards? Now look at the cards we have been discussing these past few weeks and compare them. It attracts a lot more trades to have these types of cards in your binder, and getting into the market can prove to be dangerous, but also extremely profitable.

Join me next week as I wrap up this series and discuss the cream of the crop when it comes to misprints. These are the cards that even I havenât seen and can only dream of someday owning. Misprints like these are what youâre always hoping for when you purchase that collection from an old player. Stay tuned for the conclusion to what I feel has been among the most fun series I have had the pleasure to write.