Delver of Secrets changed Pauper. Being a non-rotating format, Blue was already a fantastic option before Innistrad thanks to cards like Counterspell and Spellstutter Sprite, but Delver of Secrets gave the color an on theme way to apply pressure early. In the days before Delver, Blue beatdown would start with a Phantasmal Bear or Cloud Sprite. These cards were not bad, but they pale in comparison to Insectile Aberration. Delver of Secrets came down early and applied pressure in a way other 1-drops simply could not. It shortly became the gold standard threat for the early game in Pauper.

Other turn one plays could not hold a candle a three power flyer. The format shifted to answer Delver. After Innistrad, âcan we handle Delver?â was the question every deck-builder had to ask.

Pauper is not the only place where Delver made waves. In Vintage and Legacy the card has been at the forefront of aggressive decks seeking to disrupt an opponentâs development. Legacy, in particular, has been infested Delver. Look at any high level event or Magic Online result page and more likely than not you will see a deck with a moniker of [Color Description] Delver. In formats where you want to apply pressure early and protect the threat with spells, all while putting a wrench into your oppositionâs plans, it is hard to do better than Delver of Secrets.

Yet things were not always this cut and dry. There was a time before our first trip to the plane of Innistrad where decks in Legacy had to make do with only one creature that had an upper bound of three power. The big difference is this spell costs a single Green mana. 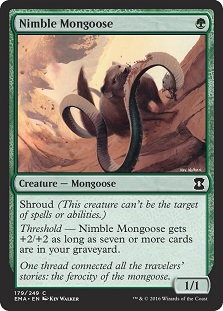 Nimble Mongoose is a card with a Legacy pedigree and thanks to Eternal Masters it is going to be Pauper legal. While Delver of Secrets largely replaced the Mongoose in Legacy it is quite probable that the nimble one will find a home in Pauper despite the seeming ubiquity of Delver of Secrets.

Shroud, the same reason Nimble Mongoose canât play nice in an established archetype, is the cardâs biggest selling point. Pauper, as a format, starts on turn one and being able to answer a turn one threat can often be the difference in whether the tally mark goes under âwinâ or âlossâ. Currently, there is only one card seeing any play that naturally answers Nimble Mongoose on turn one â Innocent Blood. While Chainer's Edict and similar cards see play, they are a turn slower than Mongoose which means it is possible to trade a 1-drop for your opponentâs second turn. Depending on the rest of the deck, doing this can put the one controlling the Mongoose firmly in the driverâs seat. The prevalence of Chainer's Edict, however, means it must be taken into consideration when building a deck. Mongoose canât exist as a singular threat, but, instead, must bring friends to the party.

The removal present in Pauper gives Nimble Mongoose a chance to succeed. The next question is whether or not it can consistently be a 3/3 as opposed to a 1/1. Considering that Dimir Delver is a moderately successful deck I am inclined to say yes, we can rely on a 3/3 Mongoose. Even if we do not dip into a second color, Green provides cards like Mulch, Satyr Wayfinder, and Vessel of Nascency to help populate a graveyard.

What about other creatures? Outside Insectile Aberration only a fully powered Wild Nacatl comes close to matching up with a big Mongoose. Domain Zoo exists but only on the fringes of the format and resolving Nylea's Presence while keeping Nacatl on the battlefield is not as easy as reaching Threshold.

Stompy is the most popular creature based deck at the moment, and a fully realized Nimble Mongoose matches up well with Young Wolf, Nettle Sentinel, and Skarrgan Pit-Skulk. Of course, the likelihood of having seven cards in the graveyard on turn one are slim to none, so that means you need to be able to buy time until Mongoose can apply pressure. In order to achieve this, Nimble Mongoose is almost certainly best paired with bounce spells. Vapor Snag and its ilk will not only help push a deck toward Threshold but also clear a path for the Mongoose to peck away at a life total. Blue also provides some stellar enables like Careful Study, Mental Note, and Thought Scour. Combining these cards with other Green creatures that want a full graveyard, a la Werebear, could let Pauper players relive the glory days of Odyssey block.

One card that might prove interesting in these decks is Moldgraf Scavenger. Pauper is a format with a decent amount of hate directed at the graveyard. Bojuka Bog sees main-deck play and both Nihil Spellbomb and Relic of Progenitus regularly get a sideboard slot. These cards have the capability to completely wipe out Threshold. While these also can negate Delirium, that is easier to achieve after a mass exile. Four toughness also matches up well against Lightning Bolt and Disfigure so following up a Nimble Mongoose with the fungus-among-us could render removal spells less than useful.

I would most likely start a Pauper Nimble Mongoose deck with this configuration. The deck is biased toward Delirium with the second Careful Study over the fourth Thought Scour and with the single Seal of Removal to help Vessel of Nascency find action. The U/G build will do its best to push through damage while keeping permanents off the other side of the table. Moldervine Cloak looks bad with Nimble Mongoose but the ability to grow the other threats while potentially adding to Delirium and Threshold via Dredge pushes it to the âgood enoughâ realm.

There are plenty of other options for a U/G Mongoose deck. Waterfront Bouncer is a repeatable Unsummon while Merfolk Looter can help enable both Threshold and Delirium. While I was crazy about Madness when Shadows over Innistrad was spoiled, I have backed off that mechanic recently. Too often relying on the mechanic will leave you with expensive spells in hand when the enabler has been removed from play.

A Nimble Mongoose deck takes on a different texture depending on what colors you pair it with. Black would seem like the next logical step with access to Gurmag Angler and other graveyard synergies, but Angler and Mongoose pull the deck in completely different directions. Gurmag Angler decks want to resolve an early Zombie Fish and start pressuring a life total while completely obliterating their own graveyard whereas a Nimble Mongoose deck will want to keep its yard fairly well stocked. Could this deck be a potential home for Undead Servant?

Okay, so Angler is too good to leave out.

While a Red version would look similar to Blue and Black with Flame Jab and Seal of Fire to help clear a path, I think a White pairing could prove to be the most interesting. White has the ability to boost a Nimble Mongoose despite Shroud with access to Exalted and Bolster. Sandcrafter Mage can help a 1/1 Mongoose become a more intimidating presence while Akrasan Squire and Qasali Pridemage can turn the little mammal into a potent offensive force. Trusted Forcemage and Soulbond also get around Shroud, so maybe 3/3 is not the upper bound for Mongoose.

Delver of Secrets may have supplanted Nimble Mongoose in other formats, but in Pauper the window is open for Mongoose to assert itself as a force. It is more durable than the Insectile Aberration while also giving decks a different focus in deck construction. The most exciting part of Nimble Mongoose being printed at common in Eternal Masters, however, is what it implies for the set. Commons are used to support draft strategies which tells us that some Green decks are likely to care about the graveyard. If I had to guess, Mongoose looks like it will slot into U/G and B/G. Historically the former has access to Threshold while the latter uses the graveyard as a resource. Regardless, this little creature fills me with hope for other cards to come from Eternal Masters. Can you answer Delver? Sure, but what do you do when the âgoose is loose?