Congratulations on passing your multiple-choice exam on meta-temporal quantum dynamics! We were particularly impressed with your answer to Question 27, the one about oscillating time-flux defibrillators, where instead of answering A, B, C, or D, you drew a picture of goat with booster rockets. We like that stuff around here! So, weâre proud to welcome you as the newest member of the Izzet league!

Now, first thing you need to know about is how to correctly operate a thermodynamic gravity redistributor. When you push the little blue button on the undercarriage on versions 1.228-2 and 2.661-18 and all the variants in between except those whose serial numbers end with a 4 but not counting those that came from the Delta7331-B labsâ.â.â.â

The first thing you need to know about is how to conduct an experiment.

âBrilliant,â âcreative,â âindividual,â and âhaphazardâ are all words you may have heard associated with us Izzet. They may be what we are, but conducting experiments is what we do. Being an Izzet is all about experimentation. Everything we do is an experiment.

Now, the thing is there are actually two kinds of experiments.

The first kind of experiment is designed to prove something you already know. Itâs conducted by replicating a theoretical model in practical environment.

THESE EXPERIMENTS ARE BORING. You already know what is going to happen! (And weâre running out of goblins). They arenât real experiments. Theyâre checklists of events you undertake to reach an end result. Follow the same steps, and you get the same thing each time.

As a passionate and creative individual with boundless imagination, that is no way for you to live! Nothing new will ever come of repeating the same old experiments. If you do what youâve always done, youâll always get what youâve always gotten. Project managing to-do lists should be left to the Azorius, who want nothing more than boring desk jobs. Youâre better than that.

The second kind of experiment is the real experimentâwhere the purpose is not to replicate a series of set results but simply to find out, âWhat happens ifâ.â.â.â?â

Those are magic words for brilliant, creative individuals like us. When you ask, âWhat happens ifâ.â.â.â?â and set about making that âifâ happen, all sorts of doors open up in your world (sometimes literallyâYazil opened up another dimension over in alpha labs the other week). By putting âWhat ifâ.â.â.â?â to the test, you innovate. You create new possibilities. You advance both your world and the world around you.

Plus, itâs damn crackers! Nothingâs quite as much fun as not knowing what youâre doing but going ahead and doing it anyway. YAHOO!!

The reason I bring this to your attention that lately, too many Izzet have been conducting experiments of the first variety. They have sought only to replicate those with the most successful outcomes. No innovation is involved, and their lives are not moving forward. Take note of our guide to commonly-conducted experiments below: 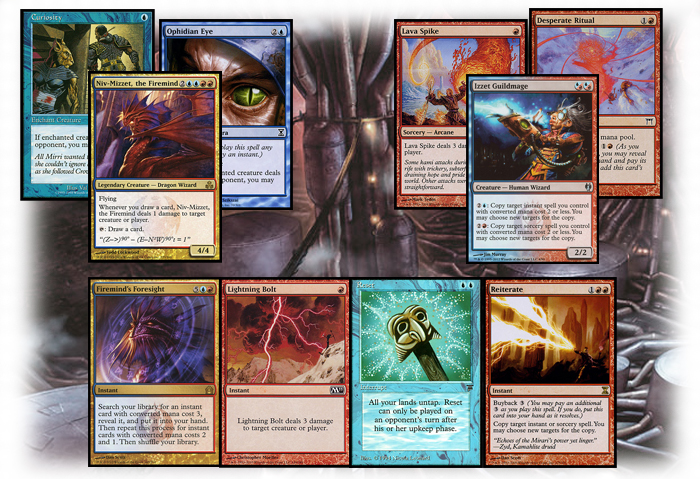 Setting up a laboratory for such purposes is just not being a proper Izzet.

So have I got news for you!

The Firemind himselfâour brilliant and illustrious Parun, the great Niv-Mizzet, most scatterbrained of all reptilesâhas taken a personal interest in you.

Yes, you, young candidate. It turns out that goat-with-booster-rockets you drew in your exam made it all the way to the top. Thereâs talk of doing the same with llamas, alpacas, and all sorts of other livestock! From now on, you will be ranked as an Izzet commander and provided with a special laboratory from which to conduct truly innovative experiments.

So, thatâs why Iâm here (and not in my lab recalibrating my gravity defibrillator). I am to introduce you to your new laboratory setup and on how to conduct proper experiments from it.

The first thing you need to know is your efforts will be overseen by the Firemind himself. He will always be on call to lend a helping hand. His presence is a surefire indicator of experimental success!

Please note that our illustrious Parun can actually be called upon in two forms. We recommend you avoid him whilst he is touch with the Firemind, as doing so can invoke immediate unpleasant actions from nearby guild leaders. They know too well the power of the Firemind and will probably attempt to stop him at all costs. Better to simply rely on his genius.

Now, laboratories donât float around in the middle of nothing you know. Youâre going to need ample infrastructure to generate all the mana you need for casting your spells.

A solid laboratory infrastructure is often not enough to power the experiments you may wish to conduct. Hence the application of power coils.

Itâs always good to have a few assistants helping out with experiments, but we recommend against having too many. Your laboratory comes with limited physical allocations (I believe one hundred is the magic number), and for every assistant you employ, you take up a valuable option that could spent on incorporating spell components. Above is the list of assistants we are initially providing you with (please note our illustrious Parun is not an assistant, but merely stopping by).

It is our recommendation you only hire assistants that either amplify the effects of your magical energy or boost you with additional resources.

Steam vents heat the floor. Niv-Mizzet doesnât like this. Also, the Boros are constantly trying to âbring him to justice,â and the Rakdos want to turn him into a sock puppet. Do not let this happen.

Spells will be the prime focus of your time in the laboratory. This is what youâll be experimenting with. As a proper Izzet, we want you to be casting as many spells as possible!

Finally, it is good to conduct experiments under a variety of different laboratory conditions. Eye of the Storm and Sphinx-Bone Wand have both been noted to bring in very successful results.

(As a side note, when we first heard about the power of Sphinx-Bone Wands, we contracted a group of Rakdos to obtain one for us, which they delivered. The next day, we heard Isperia was missing one of her forelegs and was apparently âout to get us.â Coincidence maybe?)

So, now that weâve set up a proper laboratory for you, itâs good to have some guidelines on what to do.

The defining feature of a laboratory like the one weâve set up for you is the unpredictability of the results. The spell components all interact in various ways, and itâs your job to combine them in such a way that eventually leads to a successful result.

Often, the case is you will not understand how the components fit togetherâeven when youâre halfway through an experiment. Thatâs the beauty of a laboratory setup like this. You can often achieve success in a way you never imagined was probable or even possible. For example, suddenly, out of nowhere, a quantum leap happens, and it all comes together. Itâs almost like life reallyâjust ask any successful person. You blunder and stumble and havenât got a clue where youâre going or what youâre doing, but you just keep going, and then suddenlyâ

And youâve magically youâve acquired success! (Or blown up your laboratory.)

Either way, that is what we Izzet do: continually strive for something new that improves upon the old. Or at least spectacularly fail.

Now as with any success, a Properly Conducted Izzet Experiment takes time to achieve. And the world will be against you. The Orzhov will drain you, the Golgari will try to turn you into compost, and the Gruul will be happy to just run around your laboratory hitting you repeatedly. Donât let them get to you! Use you spell components to defend yourself until you have enough resources to either draw into more resources or set off a chain of spells. This way, you can dig into further Spell Components, Laboratory Assistants, and/or Experiment Variables that you can haphazardly fashion into some form of success.

Here are some documented results produced in past experiments using the same laboratory setup that led to quantifiable success: 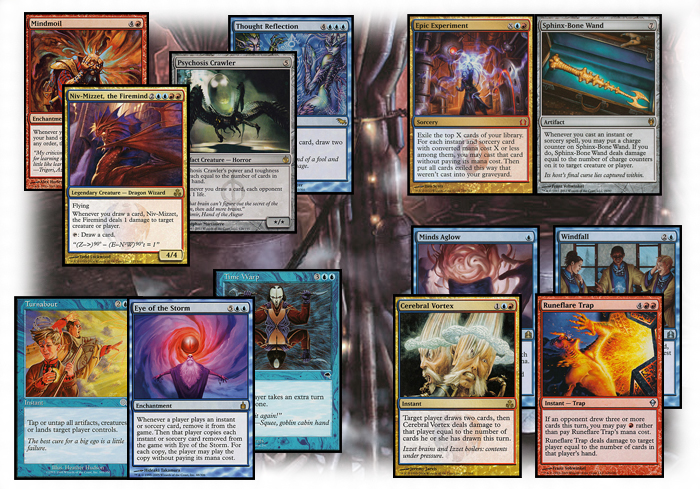 Please note that in the interest of brevity, a full listing of past experiments has not been made available. Nor does it seem possible to even produce such a list.

The whole purpose of having such a laboratory setup is to allow individual spell components to click together in unexpected ways.

It is actually very hard to conduct the same experiment twice. Some can be relied upon more than others, but the purpose of such a setup is, as soon as you have adequate resources available, just let rip, and allow the individual components to come together in their own special way. The results may often surprise you, and having things explode unexpectedly is what being an Izzet is all about!

In the nature of experimentation, it is an idea not to consider this an exhaustive list. You may wish to swap individual components out for others to give your laboratory that individual touch. Here are some recommendations:

So, we hope, candidateâahemâ.â.â.âCommander, this will give you all the tools you need to go out and conduct a successful experiment.

Just remember one last thing: Life rewards action. Thatâs why Iâm stopping this right here. I could continue on about quantum time-flux principles and dynamic vector trajectories, but thatâs not going to help you. If youâre ever going to go create something awesome (like a massive explosion), you need to get out there and do things.

So hop to it now! Great experiments await!