Do you know whatâs happening? No, not you Magic pros, not the Magic celebrities, not even you or me. Mr. Magic Player who finishes 4â8 in the drafts at your local game shop, do you know that things are changing?

I know thereâs a lot of sifting for you to do through the noise, the pundits, and the muck before you start to see the sway of illusion taking place. This Organized Play situation will change everything about competitive Magic forever, and you, my dear friend, are why we are in the middle of a revolution.

Wizards has altered touchpoints, incentives, and opportunities such that the common man wins.

The âJoesâ are now more of a priority than the pros.

Add a lens to your reading of this list. Imagine youâre a casual player in a non-major American market:

If you play in tournaments, this matters.

Casual players lost this hard. If you canât win States as an athlete, this is a pretty good alternative.

Thereâs more than one of these?

There are invites? Is it random?

I went to one once. Lots of tough competition. Sad to see this go. I saw a pro there!

Um, okay. We still can draft on Friday after FNM, thoughâ.â.â.âright? Or Thursday? Okay. Cool.

So, I will actually see pros now? Neat.

You could say it backward, too! Itâs branded; it should be on Friday, despite the arguments against it.

Sorry, Vorthoses in Serbia. This sucks.

Magic is online?! Like Duels of the Planeswalkers, right?

DOTP has tournaments? What?

Sets are still pretty good. I mean, I didnât like Scars block much, but Innistrad is sweet.

I finally bought a box!

Full arts easily accessible with an introduction to pimp/swag? It was fun.

There will be more Grand Prix events, though they mean less

If itâs under six hours, Iâll go with friends, drink Mountain Dew, and get stuff signed!

Airfare being included in PT invites

If I ever go, great. My costs are lower.

The changes arenât really that bad if you have no idea what a grinder is. If anything, theyâre largely all positive changes in the last few years.

Throw away that rubber band around your lands and get your best set of penny sleeves ready. Youâre now in the spotlight, because we like you and we wish for you to stay. Prepare for some knowledge to be dropped, sons and daughters.

If you havenât been playing in tournaments, been online, or listening to the Twitters, Mark and Aaron have been writing and Tweetingâyapping, even, at timesâto us as a community about the changes to high-level Organized Play. If you want the whole story, just Google it. Everyone and his dog are analyzing the changes.

In short, you, as an American casual gamer, will have more touchpoints, more incentives, and more opportunities to play. You will have instant gratification when you play in tournaments, and if youâre anywhere near the Midwest, you should be going to GenCon, because awesome is the easiest word to describe the spectacle that will be GenCon 2012 and the sixteen-man Thunderdome: Sixteen men enter, one man leaves.

Wizards, or someone in the chain of command, decided that these two main branded individuals, Aaron and Mark, would be the best faces to discuss whatâs going on. I donât think itâs the best idea to empower any employees outside a communications department to talk policy, but the community âknowsâ these two men and have become more or less comfortable when they talk on behalf of the company. Also, Wizards is becoming increasingly better at handling uproars, especially considering how increasingly frequently they seem to happen.

Did you see Aaronâs Tweet about how the pros will stay professionals, the gravy train of sorts? No? Here you go:

Yesâthey donât quite know what their company is going to do yet.

Strategic planning for Organized Play and affecting sales isnât really these two menâs jobs. How does any company write a strategic plan when no comparable examples other than your current system exist? How does the business plan change, and, more important, how do you maximize profits when you donât know how to maximize an untested theory? Oh, biscuits. I can relate to that, but Iâm still puzzled about one thing.

What I donât know is why these men arenât asking the common man to sit atop a chair with Wizards telling the tale of Magic: The Gathering growing into adulthood. You, I, and all the kids rocking used penny sleeves in draft just won. And, brotherâ.â.â.âwe won big. By having Aaron and Mark giving information, it proves that they care about you as the casual player. We know who Uncle Mark is. We have no idea who the CEO is.

This is not a matter of, âYou lose all this stuff, but you gain this other stuff, so be happy.â

This is a matter of, âWe love our casual players more than we love our pros.â

This isnât a âwe-versus-them,â itâs Wizards and casual playersâthe majority of gamersâversus the professional Magic players. Write that down.

This is why you should care about whatâs going on

Pros help people. They make them feel good about themselves.

They also show them how to win like Darwin and shuffle their cards in interesting ways.

I have never received a single MPR card, and I have been playing for fifteen years. I wasnât given a strong enough incentive to move from my kitchen table. I didnât garnish a single from playing on hikes or drafting in basements.

Despite the overwhelming odds against my receiving byes at a Grand Prix, it was visceral. It made sense. The devil is in the details, clearly, but it mattered.

I didnât need to do math to figure out Elo:

I no longer have to try to understand why the best player in my area chose to not play for weeks at a time. You and your fellow new users donât know, or need to know, what the OP changes are. What you do know is that whatever 1 Planeswalker Point is, Fridays have three times as manyâ.â.â.âand that seems good. If you play on enough Fridays, a magical thing called a Grand Prix, which Mike and Alex talk about all the time, could be something you can go to. Or maybe GenConâa magical place.

Why Weâre Winning with GenCon as Magic Epicenter

Iâd like to think that Magic player interactions at conventions are something to look into as a result of the Organized Play changes. With the advent of extravagant events like Grand Prixes, and the proliferation of GenConâs offerings, the art and Vorthosian market shares have only increased. Not every new player will have eight playsets to sign, but that first-time convention attendee will come back with a stack of signed cards.

Players of board games will wander into the Magic hall. Perhaps a lapsed Magic player will sit down to draft or play a Two-Headed Giant match with his girlfriend. That sort of interaction is paramount to Magicâs health.

With the World Thunderdome Championship and the Vintage alternate-art trophy, GenCon caters to this new focus of casual/grinder hybrid. This player now gains additional spectacles above the normal extravaganza of a Grand Prix to a large-scale convention like GenCon or PAX.

I love GenCon, and Iâll be trying my best to find connections between the Magic hall and the art show.

People You Shouldnât Feel Bad For

Iâve had quite enough of the Magic professionals with their self-interested, elitist viewpoints and their lack of hustle. Yes, your careers are in jeopardy. No, I do not feel sorry for you. Your 1% arguments arenât exactly popular in this day and age.

Your gravy train is becoming a gravy boat, but there will always be another player right behind you.

Youâre being the Commander player who complains about a resolved Shahrazad. Oh, you have to play more often?

Tough. The game can and will survive without you.

Itâs not like you give real, inside-baseball information anyway. I stopped my Star City Games subscription when I felt that the information was always late or incomplete. (Reading the comments, half the time people are arguing, âI pay for this?!â)

Brad plays an absurd amount of Magic. Cool, but how does he break down each card before the set comes out?

How does he, as a pro, decipher this before us?

What does he know that he can teach us?

Pros now have a harder time acquiring plane tickets in advance. Okay, sorry. That sucks, but your plight matters 0% to nearly all of us. This isnât American capitalism, where we all can have rags-to-riches stories.

Maybe weâd be more sympathetic if you gave us a greater view into your world. Perhaps if we were invested in you?

What do you have to give up to become a pro?

Grand Prix events will be everywhere. Professional players have to live by a few of them. Less international travel seems good for pros. What do you have to give up now to stay competitive? What is your sacrifice? Please tell me now in Bradâs epilogue, because that was never touched on in the book. That was brushed under the rug, yet itâs paramount to understanding Bradâs success and the worldview of a professional player. Did he lose relationships for saving $50 in an early flight to a Pro Tour?

I understand that itâs hard, but I canât feel sorry for you when my friends and I are now Darwinning.

Conclusion for today: Pick up your three-cornered hat, penny sleeve, and rubber bands: 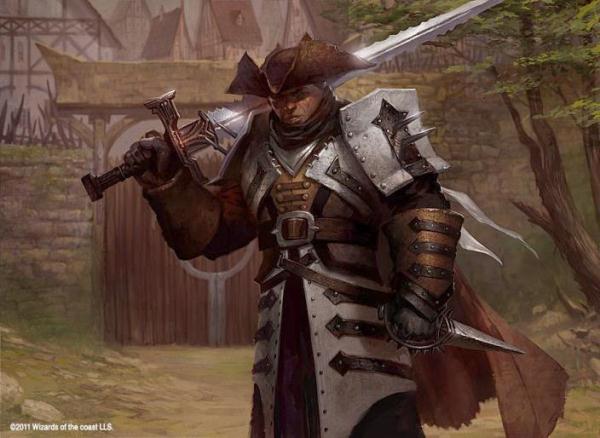 Champion of the Parish by Svetlin Velinov

Magic as a game cannot and will not die. As a profitable center, it could; thus, many, many changes are needed. Itâs too complex, and people have far too much invested for the game to disappear. If the Pacific Ocean eats the Seattle area, one fact remains: Cubes will last forever. Commander will be flavorful forever. Decades after the fact, the copyright will expire and cards will be reprinted.

This game was built in America. We build our brands to last, and Garfield likes his creation. If youâve able to attend the Magic Cruise, weâll thank him in person. To those unable, weâll take pictures.

WotCâs brand is taking a beating right now, but you have to know that their best intentions are laid before you and me. The common man and woman won. The kitchen table just expanded to another place. Please stop on into that local game shop, buy a 99Â¢ bag of penny sleeves, and a bag of Funyuns. Support them so Wizards can support us.

When the changes are largely positive for casual playersâthe, ahem, vast majority of players, ahemâI figure Chicken Little should simma down now and realize the company is doing what they can to entertain the 99%.

And I thank them for that.