PW! Weekly reporter-at-large Sarkhan Vol recently turned us on to a major trend: relocating from Kamigawa for big-time payoffs! But donât think this high-risk, high-reward life change is without its hardships. 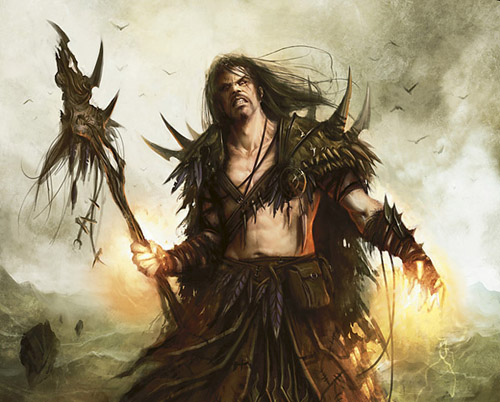 Before: Volâs first presentation as a âwalker, during his days on Alara.

âAs a âwalker, I have more mobility than most, so I didnât think it was even a big deal at first,â Vol divulged to PW! over lunch at the new Panda Express in the Schmazzgordios District of Ravnica. âI took the jump as a sophomore in college; it was part of my initiation into the Ki Ki Ji Ki frat.â Here, Vol stops to take a sip of carbonated beverage, clearly overcome with emotion.

A collegiate Vol at Kamigawa University.

âI was a nobody on Kamigawaâsince everyone is Asianâbut then, I had to live a lie on Alara. Youâve all seen my eastern-European getup; do you know how much fake body hair costs? I was working three different tavern jobs and not telling my parents about any of it. It wasnât until I went absolutely batsh_t crazy that I was able to claim my Asian roots all over the Multiverse.â 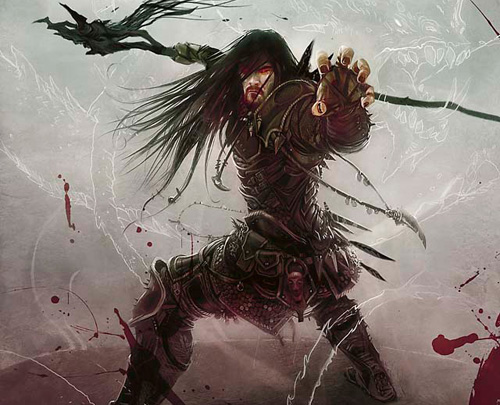 After: Volâs new identity and new look on Zendikar.

And was the mental turmoil and the selling of your soul to Nicol Bolas worth it?

âHeck yeah! I got my own comic, flavor text, a lot of Constructed deck buzz, and now, with more Kamigawans taking the jump, Iâve even got a super-hot cray-cray girlfriend,â Vol laughs giddily at this point, squeezing ketchup over his rice. âThatâs island style, brah!â he says, catching PW!âs dubious look. 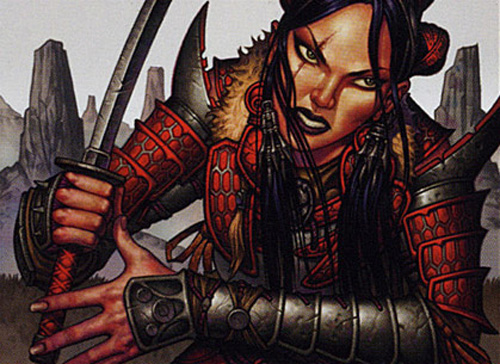 Before: Fumiko the Lowblood often suffered from depression and anxiety. 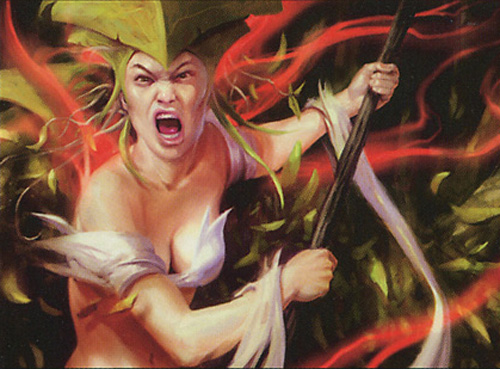 After: Fumiko today, on Traitorous Instinct. She has been offered a role in Kill Bill 3.

âItâs not just me and Tamiyo,â Vol concluded in seriousness. âEverybodyâs doing it. This is real, man.â 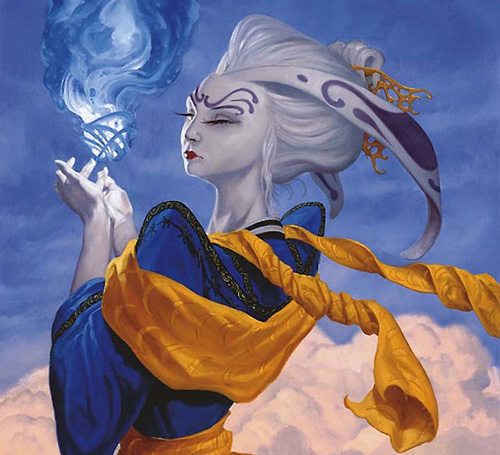 Tamiyo, the Moon Sage as a teenager on Kamigawa. âEars-upâ was vogue in 2005; earlier this year, Tamiyo debuted the âears-downâ look now all the rage with Goblins and Moonfolk.

âI donât think of myself as Asian,â she stated coolly over a wireless bonsai-tree connection. âTo do so would be to elevate my individual identity over that of the Conclave. I am Selesyna. That is all.â She hesitates. âBut the new power level is quite gratifying,â she adds, grave and quiet. 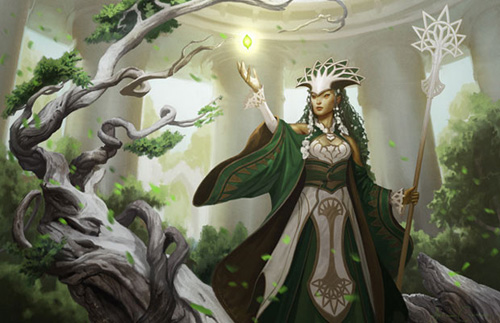 After: V-Gagaâs in-charge persona and aptitude for fashion risks has made her Ravnicaâs haute couture darling.

PW! asked V if she felt she had sacced identity for powerâher previous work was on Death of a Thousand Stings. In response, V-Gaga summoned a Centaur that literally kicked our asses. She then severed our lattice connection and was unresponsive to further overtures. 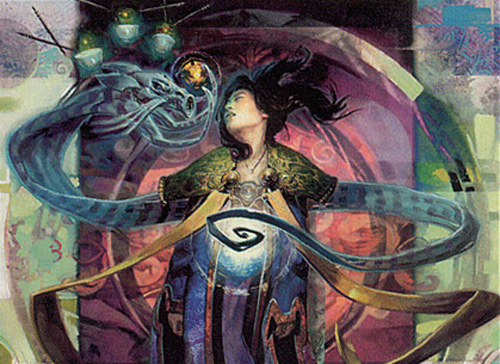 Before: In earlier days, V-Gaga appeared tormented by inner demonsâthough her sense of style was still strong.

PW! can exclusively reveal that Call of the Conclaveâs centaur is half Filipina and half Pakistani, though most mistake her for Greek, she says.

âItâs the fake eyelashes,â the Centaur admitted when PW! caught up with her as she demolished Rakdos fighters at a tourney. âThey sometimes come loose during a battle and obscure my vision, but I think itâs worth it.â 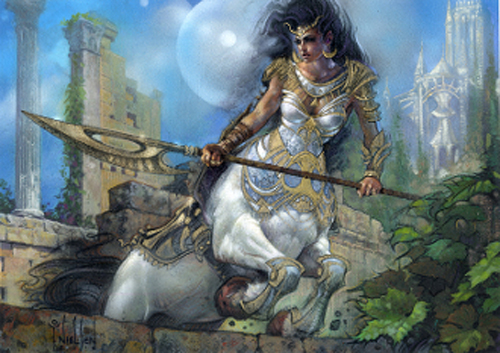 The real Eastern beauty secret to an enchanting look and lush Asian hair is to be half horse and drawn by Terese Nielsen.

PW! found that a huge percentage of Magic players are Asian, though we canât remember the exact numbers because we were buzzed on sake at the time the data came in.

Smooth as white on rice.

Luckily, the Azorius Senate had already commissioned an expensive and time-consuming Special Committee to investigate the surge in Asians manifesting outside of Kamigawa. With the help of some Orzhov hacker-accountants, PW! got our hot little hands on a totally classified Azorius internal document! 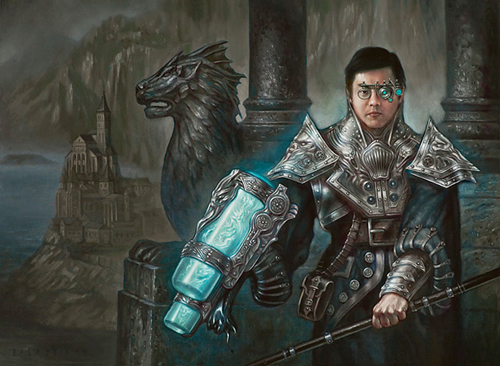 A subcommittee has been created to determine what the thing on his arm is. Contrary to the purporting of the art description, we postulate it is a thermos full of Kool-Aid.

Snapcaster Mage has been identified as Asian and possesses the power to sustain dual identities in the Multiverse and in the universe, with his Earthly alias being Tiago. We highly recommend recruiting this powerful Izzet-inclined mage to the Azorius guildâbefore the Dimir get him. They already have Finkel.

Popular writer and player Travis Woo has been identified as half-Asian with an affinity for Gruul fruit and vegetable smoothies, while competitor Josh Cho is not only Asian but Rakdos.

Artist Eric Klug is found to have been awarded the street title of Honorary Asian for his participation on the Korean National Team as well as his artistic skill. The âHonorary Asianâ status is being popularized by âa secret guild that does not existââwhich is obviously our nemesis Dimir. 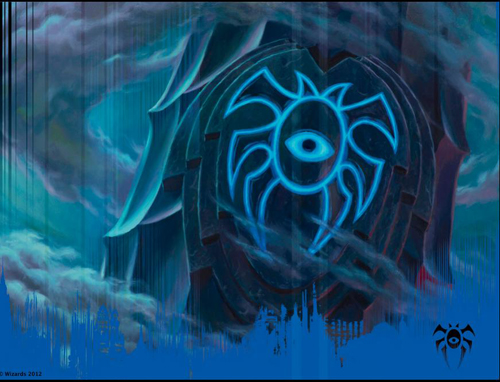 There is an ongoing investigation as to whether the eye depicted in their sigil is of Asian heritage.

Pro player Paulo Vitor Damor da Rosa has also been crowned Honorary Asian, not for his Pro Tour Hall of Fame achievements, but for his eagerness to karaoke with Planeswalker Lauren Lee.

Vraska the Unseen has been identified as Asian, albeit through circumstantial evidence, as several of our agents fell dead after being targeted by her vituperative stink eye. 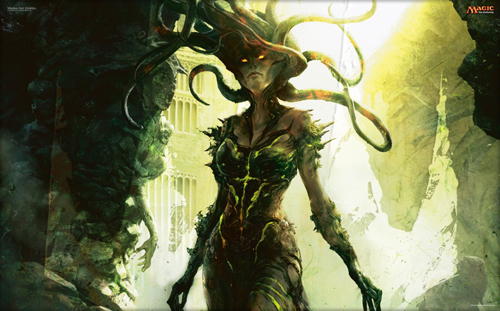 Agents that lived through the attack recommend not pissing her off.

Our agents find top MTG celeb Mike Flores to be non-ethnic, having entered the world as the result of spontaneous combustion in Izzet experiments. 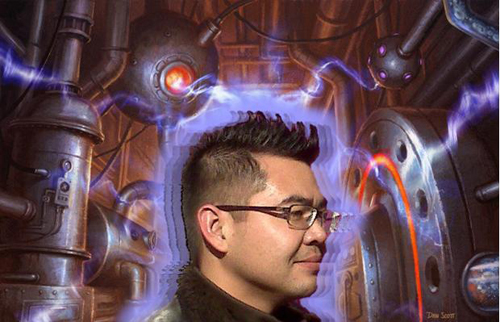 End report summary. To bypass required Official Introduction to Report, turn to page 50, where in-depth notes on the above cases begin.

Whew! Who knew there were so many Asians out there, handing out beats. What will happen when America (and its AsianâAmerican community) discovers the dark, titillating secret that Asians are interesting and formidable? Will it change the face of American entertainment media and government?

We brought this Deep Thought to the queen of cross-cultural, cross-species success herself: Ink-Eyes, Servant of Oni. By parlaying her power level into an iconic, defining Cube careerâa career also attended by success as a support player in CommanderâInk-Eyes has proven that one can remain in Kamigawa and still achieve worldly renown if you play your cards right. 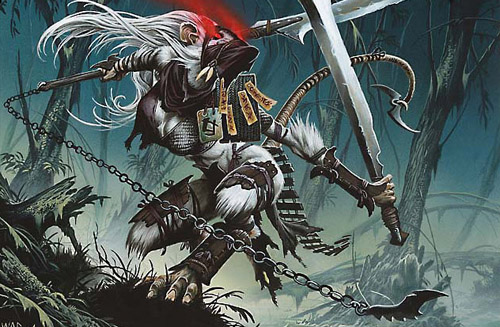 We asked Ink-Eyes her thoughts on racial representation in Magic: The Gathering and American media and whether she plans to ever appear outside of Kamigawa. Her response was, in a few words, resounding and inspirational:

PW! sources claim that Ink-Eyes is expanding her reach more than she lets on and that Pack Rat is just the tip of the iceberg.

Ah! The end of the article. As usual, Iâve gotten myself in trouble, and while I escaped the Liliana-sent zombies from the last Planeswalker Weekly! post, this time, itâs Arresters after me with one of those damn Detention Spheres. Er, whereâs that Golgari Charm!? Oh rightâthe sock drawerâanyway, here are the rest of my notesâ.â.â. 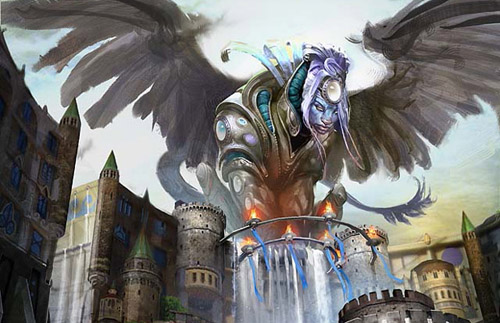 Isperia, Supreme Judge, Golgari Decoy, Guttersnipe, Izzet Staticaster, the guy on Launch Party, and MJ Scott had come out as being of Asian derivation, while an undisclosed number of Vorthos males admitted to being of Asian persuasion. 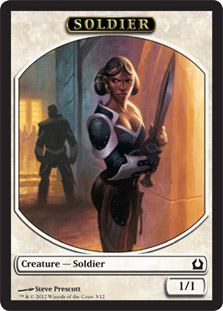 The girl on the Precinct Captain Soldier token confirmed she is three-quarters black and one-quarter Asian and listens to Mumford & Sons as well as Tha Gatherinâ. Yes, her hair is real. Yes, she supports the Natural Hair Care movement and uses natural products on her hair. 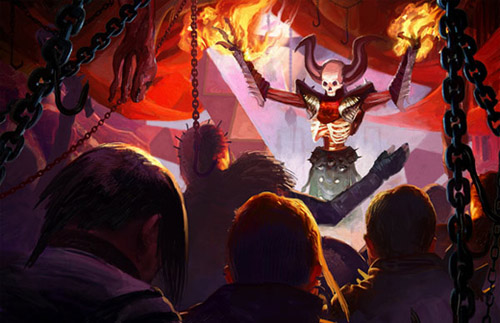 Rakdos Ringleader was still unclaimed by any ethnic group and remains generally shunned by everyone.

Slitherhead, who is (was?) Vietnamese, received a recurring role on HBOâs Game of Thrones as Stannis Baratheon. 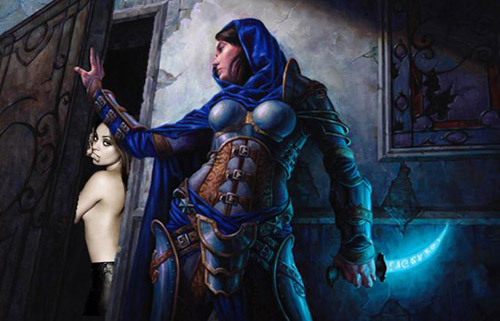 Stealer of Secrets, a RussianâThai mix, stated she, not Mila Kunis, should have been named Esquireâs Sexiest Woman Alive.

Nicol Bolas contested the aforementioned statement, claiming he should be given the Sexiest Woman Alive title, and he then proceeded to assert he is half Elder Dragon, half Mongolian-Native Hawaiian.

âTill next time, may Magic be your sword and your passport to any identity you choose.