Itâs taken me a while to figure it out, and Iâm still not sure how comfortable I am with it, but it turns out that the way I was raised has given me an inordinate amount of faith in my own abilities and talents. I am the only child of a single mother. As I grew, I went from heartbreakingly cute to stunningly handsome,* and so my mother dotes on me, which results in the sense of entitlement and inflated self-worth that anyone who has ever known me has witnessed.

* May not actually be true.

A nagging suspicion has actually been with me for a while, but Iâve been able to suppress it for a while with thoughts like âHey, dude, you are so awesome!!!â and âItâs not you, itâs those other idiots,â and the like. However, this past weekendâs endeavors have forced me to see whatâs been sitting plainly in front of my face for going on twenty-three years: There are some things out there that Iâm not good at. Shocking, I know. But read on.

After getting plugged in Drew Sitteâs article a few weeks back, I found myself flattered that anyone had actually read this. In the heat of the moment, I brazenly Tweeted this:

Almost immediately, I got an offer from Drew Sitte, and he sent me two cards, a Revised Stasis, and a 4th Edition Mana Short. Two very real Magic cards. They were also rares (technically). In order to save the suspense, this is what became of those two Magic cards: 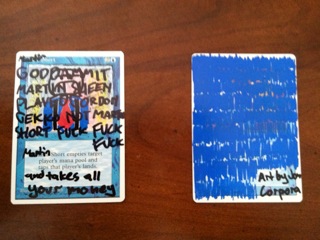 I have no idea what I was thinking when I started these. Nothing on these cards provides any semblance of coherent thought on the part of the alterer. I can say with a high degree of certainty that alcohol was definitely involved. I can apologize, or I can offer a cautionary tale of what happens when you mix unrealistic estimations of your own abilities with an infantile tolerance of alcohol and a nonexistent work ethic. Letâs get into this.

Drew mailed the cards to me in upstate New York, but when they got to my house, there was no one there to sign for them, so they went to my post office. This almost screwed the pooch entirely; I had no interest in making the long trek (one block) to the post office and standing in line with a bunch of mouth-breathers to secure a Stasis and a Mana Short. I almost considered buying the cards from CoolStuffInc, making the shipping address Drewâs address, along with a note that read âCouldnât find the time, sorry bro :(â Even now, I canât help thinking that Drew may have preferred it this way.

I figure Iâll start on the Mana Short first. Letâs go over my supplies. 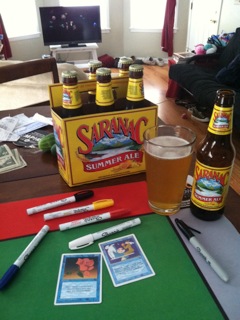 If you live in upstate New York, you undoubtedly know all about Saranac beer. Despite their commercials being scored by the unreasonably shitty band moe, they make some pretty good beers. Their summer seasonal is my favorite summer beer of all time: light and fruity, like a young J. Alexander (my only excuse for this joke is that my girlfriend is on a big Americaâs Next Top Model kick lately).

I bought the markers at Michaels. If thereâs a God in Heaven, Iâll never have to go in that wasteland again. And Iâm pretty sure thatâs Chrono Trigger on the TV in the background.

The art for this card is really strange to me. It looks like the cover of a book that a lady would carry around for the sole purpose of keeping up the pretense that she can read. Nice try, fictional lady I just made up. Needless to say, I didnât plan on incorporating this art at all. Sorry, Dameon Willich, but it appears I just know better than you. So I colored white over the whole art box. 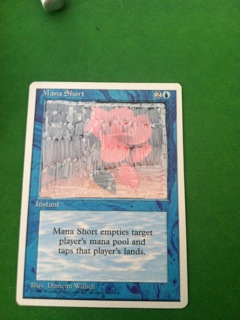 Goddammit, that looks awful. That marker didnât even work. I just looks like I spilled milk in a perfect square. At this point, Iâve got some reservations, but hey, Iâm all in now.

I thought since Mana Short sounds like âMartin Short,â I could just draw a picture of Martin Short on the card. Martin Short is the star of that movie Wall Street, where he plays Gordon Gekko, who, by my understanding, is the personification of the desired result of Reaganomics. In Wall Street, Martin Short wears suspenders and a tie and an angry face. Letâs draw Gordon Gekko. 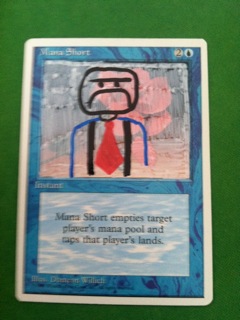 Gordon Gekko is a dick, so heâs looking pissed off here because he just found out he has to pay his workers a living wage or he knocked up his mistress or something. Money canât buy happiness, Gordon. Gordon Gekko always wears huge ties, too. And suspenders. 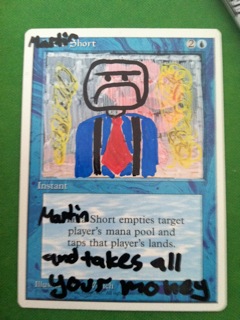 Sometimes, you get to a point in something youâre doing where, okay, maybe there is a way back, but when and if you do get back, youâre certainly not going to be the same person you were when you get back. I think that makes sense. Whatever. It doesnât matter. My point is that this is where I hit the point of no return.

You see, I wanted to draw money around him, because heâs got shitloads of money. But then I realized I didnât have a green marker. But I do have a yellow marker, which equals gold, so I figured if I surrounded Gordon Gekko with gold, people would still get it. That is decidedly not the case here. The yellow marker looks like shit here, because it mixed with the white and now this whole stupid card makes no sense at all. But just so you know, thatâs supposed to be gold behind him, not yellow smoke or whatever.

Oh, and I took some liberties with the text. Itâs worth noting Iâve moved on to hard liquor at this point. 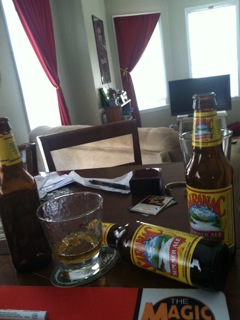 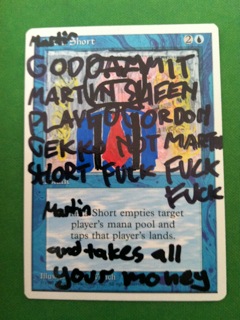 As soon as I was getting ready to move on to the Stasis, I remembered with a shock that Martin Sheen played Gordon Gekko, not Martin Short. And then I realized that two dudes named Martin have two iconic characters who both wear suspenders. Maybe thatâs how I got them mixed up.

For those of you keeping track at home, this is when reality hit. And I still had a whole ânother card to do.

Stasis is a weird card. I have no idea what this art means. Actually, I donât even know what the word Stasis means. Letâs look that shit up.

1. A period or state of inactivity or equilibrium.

2. A stoppage of flow of a body fluid.

I actually played Stasis in Legacy a looong, long time ago, in, like, 2003. My win condition was Morphling, damage went on the stack (which basically meant Morphling was unstoppable), and I got to play awesome cards like Thwart, Rescue, and Forsaken City. Itâs probably my favorite deck of all time, but people hate it. My point of view on this art is pretty much the same as it was when I was in seventh grade: Harold from Harold & the Purple Crayon is on a teeter-totter across from a humanoid dog with a blindfold that is eating a wheel of cheese thatâs still in the wrapper. I asked my girlfriend what she thought of the artwork:

âWhat the fuck is a ânoobisâ?â 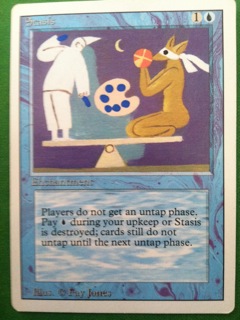 My memory is foggy, but for those of you who have never read Harold & the Purple Crayon, itâs about a little bald kid named Harold (who vaguely resembles Charlie Brown), and he has a crayon that is purple and he draws all over the house, imagining all the stuff he draws coming to life. Then his dad gets home and sees purple crayon all over the walls and he yells to his wife âDude, what were you doing the whole time I was at work? You were supposed to be watching Harold,â and of course she was just passed out the entire time so he files for divorce and right before he leaves he looks Harold dead in the eyes and tells him itâs all his fault that Mommy and Daddy canât live together anymore. Itâs a very dark story. I do not recommend it.

I wanted to make the crayons in Haroldâs hands purple, but I donât have a purple marker, so blue will have to do. I also drew some eyes on Anubisâs blindfold, because I like the idea of a ninja dog. Also, I made it so that Harold can use only blue-purple on his palette, because with the card Stasis, your options are limited as far as lines of play go, just like Harold only has one choice of color to draw with! Very sneaky, Fay Jones. 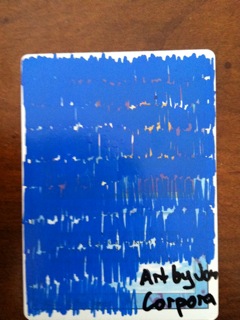 Like any drunken idiot, I wondered how far this blue idea could go. I found it edgy, because I donât actually know how to do art. I literally have no idea what was going through my head when I was doing this. Iâm sure I thought, at the time, that I was capturing the true essence of Stasis, the card: staring into nothingness, unable to see the point of it all anymore, praying for death, etc., etc., etc. I saw myself as our Andy Warhol, whose name I only know because of a Charlie Brown VHS I had when I was a kid called Thereâs No Time for Love, Charlie Brown. I thought I was breaking the mold. What I actually came up with was a lot of blue marker on a Magic card, with my name in the corner. I figured, hey, as long as Iâm breaking the mold here, I should at least put my name on it so people know it was me.

The nice thing about pop art, at least, is that if people hate it, you can just flip your scarf and give them a flippant âYeah, well, you, like, donât get it, man,â and then theyâll feel really dumb and think youâre really smart. These things happen every day.

So there you go, Drew! I hope you like your new Magic cards!

And for the rest of you curiosity seekers, any alter commissions, hate mail, or death threats go to corpora@oswego.edu.

Iâll go out with an announcement Iâm kind of excited about. Starting with my next article, Iâll be starting a column called â52 Decks in 52 Weeks,â in which Iâll go to FNM every week, trying to play a different deck each week. And Iâll be going every week. This is quite the commitment, seeing as Iâm a full-time student for another year, and I live in Syracuse, New York, in all its lake-effect snowy glory. Also (more complaining), I donât actually own very many cards, so Iâll be scrambling around every week to get cards from people, and since I donât know many people around here (new to the area), and the ones I do know around here donât actually like me (as has been documented on this website, I am a jerk), it should be a blast. But you should definitely look forward to the columnânot for my tight plays and awesome decks, but because itâll give me an outlet to grouse about Magic culture. Which is all I could ever ask for.