Avast, Magic players! We're about to venture into unknown territory with danger lurking in the underbrush, just out of sight, and nary a soul to guide us on our journey. The release of Rivals of Ixalan is just ahead, and I cannot wait to get my hands on some of the exciting cards from this new set and play them in Commander; but, before we can get our hands on the set and start cracking packs, there's something pretty significant to get through first: The Rivals of Ixalan Prerelease!

What's a Prerelease, you ask? A Prerelease is every Magic player's first chance to get their hands on the latest set, a special tournament where participants receive a Prerelease kit, build a deck, and play with the new cards from the latest set for the first time! Sounds like fun, doesn't it? For those of you who've participated in a Prerelease before, or if you're a Prerelease veteran, feel free to skip down to the section below where I cover the new mechanics and other Rivals of Ixalan specific info. If you've never attended a Prerelease, allow me to explain why they're some of the most fun you can have playing Magic!

How do I play in a Prerelease?

The Prerelease is a time for Magic players to just have fun playing with new cards. Simple as that. So, if that appeals to you, then maybe attending the Rivals of Ixalan Prerelease is in the cards for you!

Now, how do you go about doing that, and what can you expect when you get there?

Well, if you live in the state of Florida, our sponsor, CoolStuffInc.com, has prerelease events at each of their seven CoolStuffGames stores: Maitland, Waterford Lakes, South Orlando, Hollywood, Jacksonville, Tampa, and Miami! You can visit coolstuffgames.com for more information on those stores and coolstuffgames.com/prerelease to preregister. CoolStuffGames also offers exclusive Prerelease items for every flight you sign up for. For Rivals of Ixalan, you'll get a "Immortal Inquisition" Playmat and a Heavy Metal Magic Gold Double-Sided Token featuring two of the tribes from Ixalan: Dinosaurs and Pirates! Pictured below. 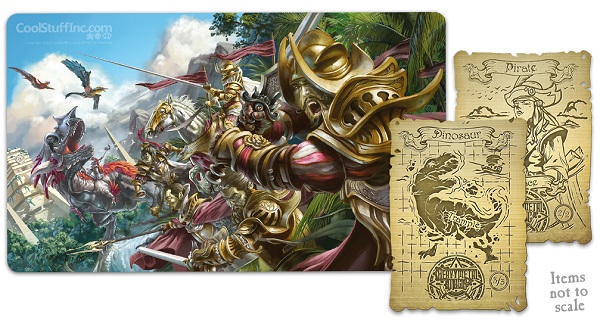 If, like most of you, you don't live in Florida, then Wizards of the Coast has you covered. Take a look at Wizards' Store Locater to find a local game store (LGS) near you that is hosting a prerelease, then contact them to find out how you can participate and what you can expect playing at that store!

Once you've found a place to attend Prerelease, it's time to get ready. Prerelease tournaments can be long, usually about 4-5 hours, so make sure you bring anything you might want or need, as long as it's okay with the store, that is. The time between rounds is a perfect for playing casually with old and new friends who've finished their matches, so bring a Standard or Modern deck so you can sling spells during downtime.

4-5 hours is a long time, so make sure you bring snacks and water to keep yourself fed and hydrated during the Prerelease. Some stores may even offer snacks and drinks for sale, so ask them when you sign up so you know what to expect.

With all the prep done, what do you get when you attend the Prerelease? Each player will receive a Rivals of Ixalan Prerelease Pack that contains the following:

Each Prerelease Pack comes with six booster Packs (four Rivals and two Ixalan) that you'll crack open and use to build a Sealed Deck. The Deckbuilding Advice Insert will help with that process, but let's go over some of the basics here.

If you've never built a Sealed Deck before, Sealed is a Limited format in which you build a 40-Card deck out of six booster packs. A typical Sealed deck is usually about 23 spells and 17 lands, with the spells being a mixture of about 15-18 creatures and 5-8 other spells (Instants, Sorceries, Enchantments, etc.).

You'll usually want to stick to 1-2 colors when building your deck so you can be sure you can cast your spells, though, if you have enough color fixing (cards that give you easier access to different colors of mana), you could splash a third color or even a fourth if you want. The Prerelease is a casual format, so the important thing is to have fun with it!

Another thing to consider when building your deck is mana curve. You'll want to make sure you include creatures and spells at every point in your mana curve so you have things to do at any point in the game. Try to include cards at every point along the curve, from 2 CMC to 6 CMC.

When deciding how you want to build your Sealed Deck, the options can be a little overwhelming. How do I know which colors I want to play? What creatures should I play? What spells? There are a couple of things you can pay attention to when looking through your cards to make the process more manageable. Did you open a sweet rare you want to play with? For Rivals of Ixalan, is there a specific tribe you want to build around, like Merfolk or Pirates? Do you have favorite color to play in Magic? All of these things can help you narrow down your pool to a pile of 23 cards and 17 lands you'll be happy with playing.

Other than that, the Prerelease is all about trying out new things and playing the cards you want to play. So, have fun with it!

Now, let's take a look at what Rivals of Ixalan brings to the table and break down the new and returning mechanics!

As with Ixalan before it, Rivals of Ixalan focuses on four distinct tribes: dinosaurs, pirates, merfolk, and vampires.

They're back! And they're badder than ever this time around. Continuing their rampage from Ixalan, Dinosaurs, and The Sun Empire, are the biggest and angriest creatures on the block and these sizable brutes have short tempers, evidenced by their returning mechanic Enrage.

On Ixalan, Dinosaurs are prominent in Green, White, and Red, with three different two-color combinations:

Beyond Enrage, Dinosaurs are some of the biggest creatures on the battlefield. Some dinos opt to stay low to the ground, built for speed rather than size. Still others use their talents in other ways, smashing artifacts, defending your other dinosaurs, or wreaking havoc on your opponents' creatures. There are multiple ways to build with Dinosaurs, or you can just slot them in to your deck for a beefy, game-ending or evasive threat.

The Brazen Coalition is ready to pillage and raid their way across the battlefield, building up massive stores of treasure and getting their way at the end of a cutlass. Pirates are prominent in Blue, Black, and Red, with three different two-color combinations:

Pirates have a couple of mechanics returning from Ixalan: Raid and Treasure. Permanents and spells with Raid care if you attacked with a creature this turn. If yes, the ability will trigger. If no, then it won't.

Many cards will create Treasure tokens, little artifact tokens that you can tap and sacrifice to add a mana of any color to your mana pool. You can use treasure for all sorts of things, and it's very useful for casting an expensive spell ahead of schedule.

Next up are the Merfolk, the

tribe of river-dwelling fish folk and the guardians of the Golden City of Orazca. While not exclusive to the River Heralds, the Explore mechanic is prominent among this ancient Ixalan race, and merfolk mechanically care about +1/+1 counters a great deal.

When a creature asks you to Explore, you will reveal the top card of your library. If it's a land, you'll put it into your hand. If it's anything else, you'll place a +1/+1 counter on the creature exploring. Then, you'll be able to choose whether or not the card revealed will stay on top of your library or be placed in the graveyard.

Otherwise, Merfolk are evasive and tricky, pumping each other up with +1/+1 counters and working their way around their opponents' defenses.

Finally, we have the Vampires, the

tribe on Ixalan. The Legion of Dusk is looking to manipulate life totals, paying and gaining life for powerful effects.

The Legion of Dusk demands blood tribute, and not just any blood will do. They break their blood fasts with the blood of the wicked, and each of the other factions are looking particularly villainous in their eyes. Pay life for big effects and then gain it back by taking it from your opponents!

If you'd rather team up with a friend and take on the Prerelease together, some stores offer Two-Headed Giant events in addition to the single-player events. In Two-Headed Giant, two players team up, building two decks out of their combined pools and playing against other teams in a single game each round. Each head shares the same life total, 30 life rather than 20, and they share phases, but their cards and lands are their own.

Two-Headed Giant can be a great way to experience a Prerelease with a friend, so check and see if your LGS is running an event if you're interested!

That about covers it! Prereleases are some of most fun you can have playing Magic, and they're a great way to experience the new set in a casual environment! So, if you've never been to a Prerelease before, why not make Rivals of Ixalan your first? Find a Prerelease near you and join the battle for the Golden City of Orazca!