Another Saturday, another Gathering Magic Week in Review! Robert here! Itâs been another exciting week here at Gathering Magic after the first tournament of the new Standard season. We now have a look at how the format may shape up going into Pro Tour Dublin next weekend (Feb. 3-5). With Emrakul, Copter, and Reflector Mage out of the way, the format has made way for CopyCat combo and incredibly synergistic B/G decks with Winding Constrictor and Verdurous Gearhulk. Will these things stay on top as the format evolves? Our authors explore the new format and more in our Week in Review!

This week, Gathering Magic welcomes Daryl Bockett back to the writers roster! Daryl likes to focus on multiplayer Magic, and his first article upon returning is no exception. How long should a multiplayer game go? Daryl defies some conventional wisdom and defends the long game!

Graveborn Musings: In Defense of the Long Game by Daryl Bockett

In other news, the FNM Promos for April, May, and June were revealed this week! April features new artwork for the Kaladesh Servo-making Sorcery, Servo Exhibition! May brings us some dynamic new artwork for the Rakdos-colored removal spell, Unlicensed Disintegration!

However, the most exciting promo has to be Juneâs. 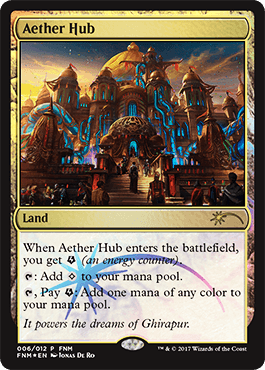 Thatâs right! The imminently Standard playable Aether Hub is getting a sick looking promo come June, and this is cool for a couple of reasons.

Now all we need is for Julyâs FNM Promo to be Fatal Push and weâll be all set!

Ali examines the winning deck list from the SCG Open in Columbus and brews up some new decks to attack Aether Revolt Standard!

Kyle talks about the U/R Dynavolt Tower list he would have run at the SCG Open and how the format may evolve in the wake of Standardâs first big tournament.

Jim takes a look at the big winners and losers this week from a financial perspective? Is now the time to buy Masterpieces? What cards have room to grow? Find out in Jimâs article!

Aether Revolt Release: The Good, The Bad, and the Ugly by Jim Casale

Thereâs More Where That Came From!

Jayâs article this week was featured on Wizards Daily Magic Update! Join him as he deconstructs the Ajani Planeswalker deck and rebuilds it into smooth engine. Listen to that baby purr!

Alex continues his Pauper Primer with a breakdown of the Aggressive Decks in the format, both past and present. Whip out the pen and paper and get ready to take notes!

Solo Modern wasnât the only thing changed by the banning of Golgari Grave-Troll and Gitaxian Probe. Ben explores what Unified Team Modern looks like now that Dredge, Infect, and Death's Shadow Aggro have lost some steam!

Team Modern In A Post-Ban World by Ben Friedman

Kevin ventures into the wilds of Aether Revolt Standard and emerges with this sweet B/R list featuring Gearhulks!

And Thatâs the Way it Was

That wraps another Gathering Magic Week in Review! As always, thereâs so much more content on our site than I can put here, so I welcome you to explore everything our site has to offer!

I want to finish this look back at the week by posing a question for discussion.

What decks are you hoping to see in Aether Revolt Standard? What cards do you think should be made into FNM promos?

Leave your responses in the comments below, and weâll see you next week!

Find us on Social Media!