I am very excited for a lot of these new cards! To be honest, I'm not sure anyone has put this together yet but there's a lot of synergy in this set. Attune with Aether seems innocuous at first, but this supercharged Lay of the Land will help make its mark in Standard. I'm concerned that Energy may prove to be the best thing in Standard but only time will tell.

Joking aside, there are a lot of exciting cards in Rivals of Ixalan that are just begging to be overshadowed by the Temur Energy variants. So, while I will discuss some other cards with potential, I'd really like to just work on some Temur lists and cards that could potentially work into the already powerful strategy. I'll be back after the set is fully spoiled with my picks for most impactful cards; but, until then, we can only work with what we have.

Temur has been fairly dominant in Standard. Every card is powerful and the deck is very consistent. In addition to this, the deck is extremely customizable. While I can't fault folks for wanting a change, I highly doubt anything is going to get banned. Instead, you should learn to love the Energy. Bathe in the Energy. Let it feed your desires and give you some new found love for Lay of the Land and boosted Elvish Visionaries. With a new set we get all sorts of new goodies, but I'm only going to talk about one card I'm interested in so far for Temur. 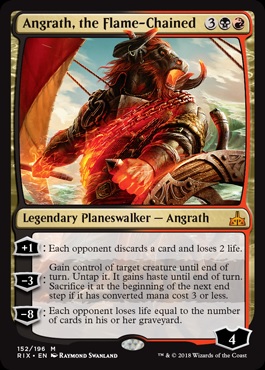 This card has me all sorts of excited. While it doesn't have a high loyalty, if you're playing a deck with lots of removal and ways to defend, this card can take over the game. In many ways it reminds me of an overcosted Liliana of the Veil in a deck like Temur, which does a great job of controlling the board as it is. While this card is going to be questionable against a deck like Mono-Red (as an overcosted semi-do-nothing) overall I think Angrath has the potential to take over games and win. It should be said however that the card is really only good ahead or at parity. It isn't going to pull you back from behind as well as some other Planeswalkers but Temur is already so good at doing that it might not matter most of the time.

The minus ability here will be an important mirror breaker. Being able to take a Glorybringer, exert it, and then hand it back to your opponent still tapped is a great way to break board stalls and gain value. Past that the sacrifice clause for CMC three or less is interesting because, if your opponent has Whirler Virtuoso and you have a lot of Energy, it can be a good way to protect your new Planeswalker and prevent them from getting ahead. Afterward they won't even get it back, so the minus ability here can also be used to help clear up the board or remove a troublesome Longtusk Cub or Ahn-Crop Crasher.

Angrath, the Flame-Chained has the right kind of power and ability to end the game that I'm interested in exploring it in different decks. However it costing five and its inability to defend itself might lead this card to being relegated to the sideboard for any midrange mirror and control decks.

But maybe you're more interested in some other decks. I only blame you a little bit. Energy is great. But maybe you're an aggressive sort and you want people to be blazed by your Red flame. 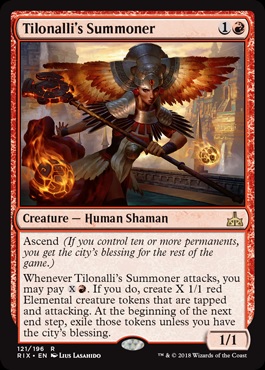 There is certainly some tension in building this deck now. The tension between Tilonalli's Summoner and Rampaging Ferocidon makes me wary to play both but Tilonalli's Summoner is a powerful card that can get out of control if uncontested. If you're ever able to hit Ascend, the game can get out of reach and this card is fantastic against control decks since it allows you to extract a maximum amount of value. You don't have to commit much else to the board since it provides a mana sink and it makes Settle the Wreckage look kind of silly.

On a side note, I think Ascend is an interesting mechanic. Standard has shifted toward a midrange slugfest, so getting to ten permanents might not be that unmanageable. The deck I think of the most when it comes to a multitude of permanents is Tokens, and it might be time to check in on that. Radiant Destiny could work as a sort of lord plus Intangible Virtue for any of the tokens available. While Servo will be the most popular name, it wouldn't be unreasonable to name Vampire or Human. Either way a token anthem seems great for the deck. 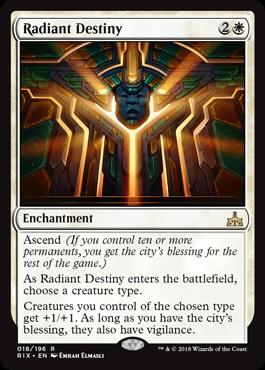 Golden Guardian would also be of great value in this deck, but turning it on in this version seems extremely difficult. Spending eight mana to fire down four tokens in one turn seems like a miserable method. Perhaps if we played the Esper Version with The Scarab God we could make better use out of it. Churning out 4/4s could be an easy way to close out most games in a deck that can sometimes struggle to do so.

The last deck that could potentially be good is a dinosaur based ramp deck. Without Ulamog, the Ceaseless Hunger to ramp into, the big choices have been lacking. Instead, we take a look at a bit of a brew Frank LePore was playing around with on Channel Fireball. It might be a good base for something new and reasonable. Dinosaurs are all powerful, and we have even more big hitters in the Elder Dragons to ramp into it. The reason I'd like to explore it is the potential for a new Rampant Growth. Being able to jump to four mana on turn three can help get you out of the gates fast enough to be able to deal with Mono-Red or be able to jump the gun on Temur.

These dinosaurs feel extremely powerful and seem like a great way to go over the top. I've included The Immortal Sun here as a call back to Legacy MUD decks which use cards like Coercive Portal as a way to draw additional cards and keep the gas flowing. While normally a card like that doesn't do much in decks that aren't trying to go as big here it can be free it can help solve the issue of dealing with Planeswalkers while providing an absurd amount of value of making your ramp and creatures cheaper and continually providing card advantage. Maybe we're supposed to play more here but the artifact being Legendary and wanting to keep a high density of ramp and creatures. For now I'm content seeing how this version plays out.

While some of these deck choices seem weaker than Temur we are starting to see enough interesting cards that new archetypes could have life breathed into them. Or we will just see Attune with Aether remain the best choice. While that remains to be seen I'm ready for week one of new Standard and the rest of spoilers.