Lots of folks think their bosses hate them. After being given a preview card for Masters 25 to spoil, I can assure you my boss DOES in fact hate me. 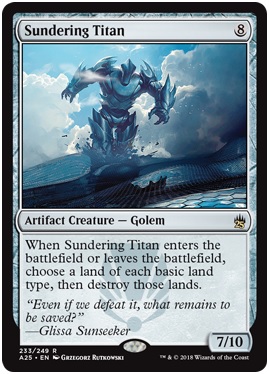 A card that strikes fear in the hearts of many shard mages, Sundering Titan is a card I'd always rather be casting. I'll be interested to see how the rest of the Masters 25 shakes out because if it's a slower format and ramp is reasonable to build around I can see Sundering Titan be a happy windmill slam to build into. Originally from Darksteel, Sundering Titan was birthed into a format alongside cards like Cloudpost and Tooth and Nail. While Affinity dominated during that time, Sundering Titan would have some time to shine throughout its life. However, we're going to look at a Modern deck that, while not seeing a ton of play, has always been on the precipice of breaking out.

Sundering Titan is usually the bane of my existence in Modern decks I enjoy playing. I really enjoy some three color decks and my Golem nemesis is always ready to eat away at my mana base. With a reliance on 4-drops like Jace, the Mind Sculptor it's even more important to protect your mana base.

Everyone is quite familiar at this point with my disdain for Tron in Modern and how I hope to dodge it. It's cost me quite a lot of sanity when my opponent always seems to have Tron online turn three and I have to imagine, with the unbannings and the reprint of Sundering Titan, folks might be inclined to try Tron as a deck to go way over the top. But for me, I'm thinking of taking a little detour in Tron's roots and head over to the control side with Mono-Blue Tron.

On MTGO there's quite the ringer who goes by "shoktroopa". He has a ton of 5-0s with the strategy. Modern is often about playing what you know and knowing your matchups and this deck certainly feels that way. It has plenty of tools to survive and one of the heaviest hitters is Sundering Titan. Sundering Titan is always wonderful against me because I love three color decks. Since Modern is filled with so many strategies that employ Shock lands, our metallic overlord here can be even more devastating. Since the wording is "leaves the battlefield," bouncing it with Jace, the Mind Sculptor or Pathing it will leave more ruin in its wake.

Playing Blue also gives us access to Jace, the Mind Sculptor ourselves, which adds some consistency to the deck and another win condition. Mono-Blue Tron doesn't have the raw power of the Green Tron variants, but it does provide a ton of consistency and even more interaction. In truth, Mono-Blue Tron is more of a control deck with a big mana advantage. Cards like Fulminator Mage and Surgical Extraction can be annoying for all Tron decks; but, unlike the Green versions, there are plenty of cheap cards to cash in while you're setting up in Mono-Blue. Let's take a look at what a potential decklist could look like.

So what are the benefits here? The deck is certainly worse at being a Tron deck and doesn't feel dedicated enough to be control. What we do have here is a ton of consistency. Thirst for Knowledge is one of the best draw spells in Modern and plays well with the chosen counterspells. While most control decks are going to have awkward turns with their mana, Tron allows some great turns to be able to cast win conditions and threats while simultaneously being able to protect ourselves.

Playing Tron also gives us a benefit of being able to play harder to deal with threats. Taking a look at the currently played removal, we can see Lightning Bolt rising in popularity. And while Lightning Bolt is fantastic for dealing with some planeswalkers, it lines up really poorly against Mindslaver, Wurmcoil Engine, and Sundering Titan. Tron will usually have a good control matchup, and when Mono-Blue gets to go way over the top and still have counterspells, the matchup will steadily get worse. I would take it that the Green Tron matchup is rough, but I feel better playing the Blue variant against control decks and midrange decks.

One of the key singletons I imagine becoming relevant is Chalice of the Void. I can certainly imagine aggro decks can run you over, and having access to something that can negate burn spells Game 1 can give you the time you need. With Jace and Bloodbraid Elf starting to pick up, I expect the non Jace and Bloodbraid decks to mostly go under to try and make these powerful cards irrelevant. Since this deck is trying to go way over the top, having cards that interact early is going to be important and Chalice of the Void can be a beating.

Playing against Tron is something I'm never happy to do, and with the style of decks I play, trying to play against this controlling version with some finishers that tear apart my mana base is something I'm looking forward to even less. Jace, the Mind Sculptor is a fantastic addition to the deck, and I do not look forward to the inevitable game against this deck where my opponent casts Sundering Titan to eat my lands, uses Jace to bounce it, and then casts it again. Until then, I'm hoping this Titan stays far away from me even in the booster pack.