Recently I posed some questions about Team Event morals to both my Twitter and Facebook and had enough discussion that I'd like to pose these in an article as well as my attached thoughts to each question. I think the immediate answers are not the correct ones and it's important to discuss since Team Events are becoming more common over the next few years. If the 25th Anniversary Pro Tour Team Event is a huge success, I wouldn't be surprised if Team Events ran rampant.

You're sitting in the A seat. While shuffling you notice the B and C seat are shuffling the bottom of their deck in your line of sight. You see what each of them are playing.

Do you tell your teammates what they are playing?

Do you think it's wrong to tell them IF you do tell your teammates?

Should you actively being looking a different direction to avoid this scenario?

This has a lot of moral implications. Based on my poll, it appeared most players would agree that if you did know the opponent's deck it's worth it to tell your teammates what they are playing. Here, I'm not too sure I disagree. Previous knowledge can be a huge benefit to your teammate. Often times in tournaments we will ask friends what a person is playing to try and figure out extra hands we could keep. Previously derived information has become a major part of the tournament scene. Here, I don't think there's really anything wrong with this.

However knowing previous information ends up being a different story when that information is learned during a match. For this scenario, I think if you know an opponent's deck BEFORE the match that it's acceptable to tell your teammate. But just like most normal games of Magic there's a good chance you won't know UNLESS you're doing something you shouldn't.

I think this is where people get tripped up and where a lot of confusion came in. Based on my social media it's pretty clear most players believe that there is nothing wrong with looking at the opponents while shuffling in an effort to see if they will mess up and shuffle in a revealing way. The more I've thought about this line the less I am happy with it and the more I feel like it's trying to gain an unfair advantage. This is either passively attempting to gain an advantage or actively trying to do so.

In a 1v1 setting you're looking at your opponent or away from their deck during shuffling and cutting. During this time you're not looking down at your opponent's deck constantly looking for them to mess up. Instead, you're using this time to ensure your opponent is not stacking their deck or yours. This should be the case with Team events as well. Look at your opponent and let your teammates look at theirs. Stop trying to get some extra information by looking at the opposing team on the off chance they shuffle in an odd way due to teams and you see their deck. In many ways, Mike Sigrist put it perfectly 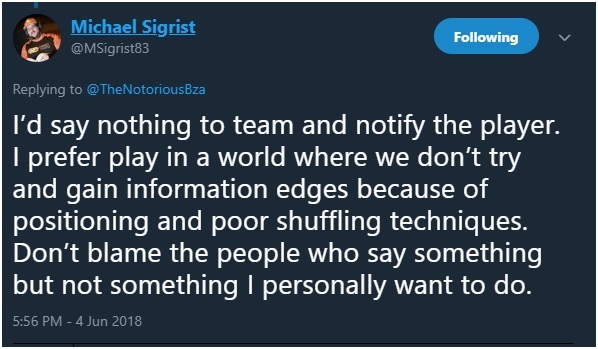 I'm not against players saying something to their teammates about their opponents decks. What I am against is players who actively or passively look toward their opponents in different seats to try and catch a glimpse. It isn't that difficult to look elsewhere and you have an opponent directly across to consume your attention.

So this begs the question; is this wrong for you to do?

I feel like the answer is a little murky. Magic is an extremely competitive game and trying to gain whatever edge you can without cheating is important. Knowing what players decks are leads to a potentially huge edge. That being said, I don't think going out of your way to find out a deck through unconventional means is appropriate here. Team events are a slightly different animal and trying to look at your opposing teams hands while they shuffle has little other recourse except for trying to catch a glimpse of what their other seats are playing to gain an advantage.

For me I used to do this myself. Take a look toward the other seats in the hopes to get an edge. But after really thinking about it I've come to the conclusion that I'm not on board with it anymore. Just play the game and make decisions as you would normally. If you have information previously, that's fine, but stop trying to gain an edge you don't deserve because folks aren't used to team events just yet. You wouldn't look down while shuffling your opponent's deck and I don't think you should look across to see it either. Overall you're just trying to gain some kind of extra edge that you can't get in non team events.

If you're looking for Team Unified Standard advice, I would recommend avoiding Green decks. I think overall they're fine but seem weak against

, which pretty much everyone is playing. For my team this last weekend, we played

Midrange/Control (a la MisplacedGinger's version), and Mono-Red (with Scrapheap Scrounger). We felt these decks lined up well against what players would be bringing to the table. The decks line up well against any Green decks and have game against both

and Red decks. We wanted to get under the

decks with a lower to the ground version, but John Rolf and Jonathan Sukenik seem to have found a great variant of Mono-Red with Scrapheap and Rekindling Phoenix.

deck has looked particularly impressive against the Red decks and is well suited in the sideboard to be able to fight it. I would take Game 1 as quite difficult for

is going to be fantastic. The Red matchup is already solid enough that you don't have to over sideboard; It's already in a great spot. I'd imagine the Green matchup feels incredible as you have plenty of unconditional removal and The Scarab God to completely take over the game. You're certainly the control deck in a lot of games and this deck has the tools to be able to compete.

Good luck in your Team Events and at your RPTQs!