Editor's Note: This puzzle has been corrected from its original version. We apologize for the inconvenience! 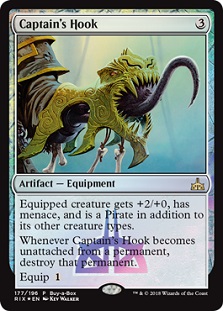 It's your first booster draft tournament of the new year, and you're already losing. That's not a good sign.

Your opponent, Su Ling, is using the tried-and-true strategy of "play big creatures and smash things". While it's a slow strategy, it's fast enough for your local game store's Unabridged Cube, an unwholesome mix of one of every card every printed. What's worse is that while Su Ling is playing with cards like Serra Sphinx and Ancient Silverback, you're stuck with cards like Sadistic Augermage and Cyclopean Snare.

Interestingly, however, you pulled something interesting in your draft pool: a Captain's Hook, and the Rivals of Ixalan buy-a-box promo version at that. You've been able to hold the line for a couple of turns now, thanks to a single Soulbound Guardians on your side of the table. Between the Hook, the Guardians, and an Organ Grinder that's eaten all the cards in your graveyard, you're now just waiting to draw something that can turn this game around.

"I'm declaring my attack. Are you tapping anything with your Cyclopean Snare?"

You glance at the Snare, which you've been activating and casting for a while now. "Uhâ.â.â.â no," you say. "Go ahead."

You give her a strange look. "I have a 4/5 flying blocker," you remind her.

"I know. Does that mean that you're blocking with it?"

Whether she's bluffing or actually has the pump spell in hand doesn't matter; you're at six life and can't afford to let the Sphinx through. "I'll block it with the Guardians," you finally say.

Su Ling taps 4 mana and drops a Briarpack Alpha onto the table. "I'll make it into a 6/6?" she asks.

You sigh and drop your Soulbound Guardians into your graveyard. So much for holding the line.

Su Ling taps the rest of her lands and casts a Brontotherium to empty her hand. "That's all for my turn," she announces.

As you untap your permanents and peel the top card off your deck, you muse that some people are lucky enough to draw a Plague Wind in this situation, or a Dregs of Sorrow, or even something as simple as a Congregate. Unfortunately, as you stare at your newly-drawn Mishra's Factory, you realize that you're not one of those people.

"Uhâ.â.â.â can you give me a few minutes?" you ask. "I just want to try something."

It is the start of your first main phase. Defeat Su Ling before the beginning of her next combat phase. 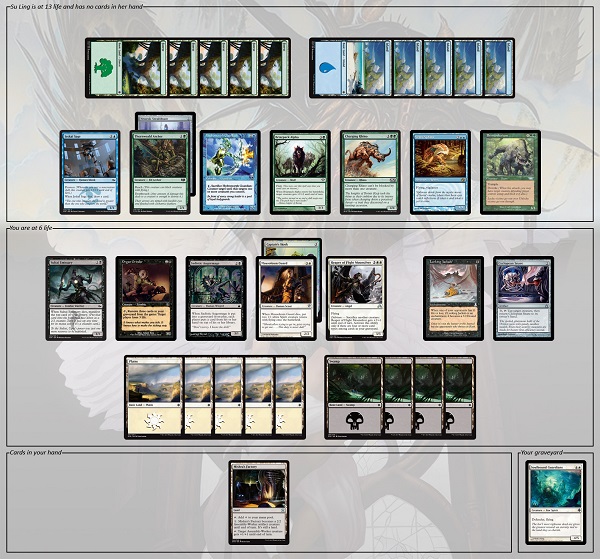 Su Ling is at 13 life and has no cards in her hand. She has the following cards in play:

If you think you've got a great solution in mind, don't put it in the comments! Instead, send it to puzzles@gatheringmagic.com with the subject line "Puzzle -- Off the Hook" by 11:59 P.M. EST on Sunday, January 7, 2017. We'll include the best ones in next week's article along with the next puzzle!

What better way to end the year than through a countdown? "Even disregarding the fact that the opponent has too much life and too many blockers," Ryou Niji writes, "Baron Von Count simply wouldn't approve of any win that doesn't use his last ability. But that's a problem because we don't actually have that many cards to cast, let alone cards with the appropriate numerals. We do have one card in hand, and up to three creatures can be returned to our hand with Necromancer's Magemark, but where does the last one come from?"

"One thing to be said for Un-sets is that they require a very different set of deck-building knowledge," Addison Fox remarks. "For instance, given our creatures in play, it's pretty unlikely we'd want to play Bloodthorn Taunter if it didn't have a '5' in its rules text for the Baron's trigger."

For that matter, it's not too difficult to identify possible triggers for the Baron:

So where do we get that one extra spell? Stephen Gross points out that there's one more card on the table that does let you cast something:

"Since we do need to choose a target for the final spell," Ryou adds, "I would suggest Baron Von Count himself for maximum irony. The spell, of course, would never resolve -- the last ability of Baron Von Count triggers and resolves first, obliterating the opponent."