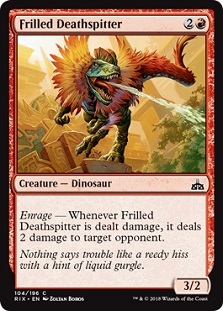 "I'm at three wins and no losses so far," you tell Mari.

"Nice," she says, "so am I. Apparently nobody here knows how to play against cards like Choice of Damnations."

Mari glances over at your mutual friend, who's locked in the final game of his match. "You can see for yourself," she says, "but it doesn't look good."

"It's not," CJ groans as you lean over his shoulder. "I did manage to get one of those preview cards you've both been talking about -- that's the Frilled Deathspitter sitting over there. The problem is that Vincent over here just has so many lifelink creatures. I can't figure out how to attack or block."

You nod. With one of each card ever printed, the Unabridged Cube has a strange sense of humor sometimes.

"It doesn't look that bad," you point out. "You've got an indestructible Bladetusk Boar that he can't block, and that Furnace Whelp seems to be holding your ground against his dragon."

Vincent taps 4 mana and drops a Daring Demolition on the table. "Destroy your Furnace Whelp?" he asks CJ.

"You had to tempt fate," CJ grumbles. "I'll sacrifice my Whelp to Goblin Bombardment and deal 1 damage to you."

Vincent scribbles something on his scorepad. "That puts me at 16 life. I'll attack with my Ruthless Deathfang now," he continues. "Take 4 damage and go down to 5?"

"I'll tap my last 4 mana," Vincent goes on, "and cast Vampire Outcasts with bloodthirst. Then I'll end my turn."

CJ gives you and Mari a cynical smile.

"You could still win this, you knowâ.â.â.â" Mari says.

"Yeah," CJ says, "I just have to figure out how to outrace a Ruthless Deathfang and three lifelink creaturesâ.â.â.â at 5 life!"

"Calm down," you tell him. "You might still draw something good."

This seems to quiet CJ, who untaps his permanents and draws his card for the turn. Unfortunately, this happens to be a rather underwhelming Sigarda's Aid.

"I guess that's it," CJ says, extending the hand. "Where's the match slip?"

You glance at Mari, who's shaking her head slightly. "Do you think there was a way he could have won that one?" you whisper.

"I spent the last few minutes counting up the damage he had on the table," Mari says. "CJ might not have realized it, but that Sigarda's Aid was probably exactly what he needed."

It is the start of your first main phase. Defeat Vincent before the beginning of his next combat phase. 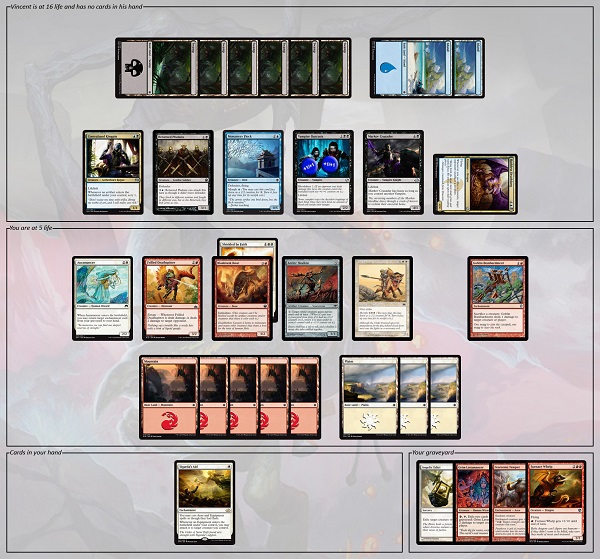 Vincent is at 16 life and has no cards in his hand. He has the following cards in play:

If you think you've got a great solution in mind, don't put it in the comments! Instead, send it to puzzles@gatheringmagic.com with the subject line "Puzzle -- Fuel for the Fire" by 11:59 P.M. EST on Sunday, January 14, 2017. We'll include the best ones in next week's article along with the next puzzle!

The original version of last week's puzzle had an error in the form of a stray Wizard Mentor. Assuming that your opponent controls an active Wizard Mentor, activating Cyclopean Snare to tap down one of their creatures gives them the option of bouncing that creature with the Mentor in response. This removes the target for Cyclopean Snare's ability and prevents that ability from resolvingâ.â.â.â effectively stopping it from returning itself to your hand (for reasons we'll see later).

Without the Wizard Mentor, however, a solution becomes much more workable. "Your route to victory today rests on the wings of an angel," Greg Dreherwrites."But before you can win, you're going to have to chop off a lot of hands."

"With Delirium active and a clean attack, the Reaper of Flight Moonsilver can represent a whole lot of damage," Allen Smith adds."Unfortunately, we only have one card type in our graveyard, and Su Ling has two things that can block a flier, so even a menacing pirate angel can't get through. Cyclopean Snare can solve one of those two problems, but the other one seems hopeless at first glance. Our only means of getting cards into our graveyard involves moving Captain's Hook around, and that can only dump creatures in our yard. Unless we can make a land creature, an enchantment creature, and an artifact creature, we're in a lot of trouble."

It's indeed possible to create a land creature with the Mishra's Factory you just drew, and if you can get your opponent to 10 life or less, the Lurking Jackals makes for a fine enchantment creature. But the method of creating an artifact creature is a more complicated one, and this is the reason why you need Cyclopean Snare in your hand. Brett Dery writes:

Some minor variants to this solution change the order in which you pass the Captain's Hook around. You could, for example, animate the Mishra's Factory first, then equip and unequip the Hook to and from the Assembly Worker before starting with Sadistic Augermage. All of these have one interesting aspect, though: "Even though we used all of our available mana," Bill Cheng observes, "none of it required a colored source."

This, however, pales in comparison to the other interesting thing about this puzzle, and that's the fact that it finds a good use for an artifact that has been long consigned to the bargain bins. "Cyclopean Snare has been waiting 13 years for its time to shine," David Arnold remarks.