Login
0 Item
Advanced Search
Sign In
Create Account
Having equipped Cobbled Wings to your newly-cast Dinosaur Hunter, you now consider whether or not to cast your Flood of Recollection. However, the only instant or sorcery card in your graveyard at the moment is a single Recover, and as desperate as the situation is right now, you think you can afford to wait a little longer.

When your local game store recently announced an overstock of the Ixalan expansion and a shortage of its follow-up Rivals of Ixalan, someone suggested a modified Sealed Deck tournament to address the imbalance. And that's why you're now this close to losing against Qian's

Qian has a vigilant Sun-Crested Pterodon whose high toughness is difficult enough to handle. Once it got a Captain's Hook attached to it, though, you had to admit that five damage per turn wasn't going to be good for your match record. Fortunately, you've drawn into a couple of creatures, once of which is a well-timed Dinosaur Hunter.

You cast the Dinosaur Hunter followed by a Mist-Cloaked Herald, then equip your Cobbled Wings to the Hunter. You make sure that you still have enough lands to activate your Shore Keeper in case anything goes wrong, and then pass the turn.

Qian untaps, draws a card, and reads her Forerunner of the Empire again. Then she drops a Relentless Raptor into play. "One damage to everything?" she asks.

You sigh, dropping the Herald and your Vampire Revenant into your graveyard. That's two less blockers for you.

"Move to my combat phase," Qian says. "Attacking with my Sun-Crested Pterodon, my Shining Aerosaur, and my Exultant Skymarcher."

You glance at her Sun Sentinel, which has its own Cobbled Wings attached. "Just those three flyers?" you ask.

"Just these three flyers. Are you blocking?"

You've had this scenario in your mind since last turn, so the move is obvious. "I'll block your Pterodon with my flying Dinosaur Hunter and my Siren Lookout," you say. "And I'll have my Spire Winder blockâ.â.â.â your Skymarcher."

"Not my Aerosaur?" Qian asks.

"My Spire Winder already has one damage on it," you explain. "I can take three damage to the face now and then have it block your Aerosaur next time."

Qian nods. "I see. Slash of Talons on your Dinosaur Hunter?"

You suddenly feel like somebody's stapled a 'KICK ME' sign to your back. You quickly scan the board, stopping only when you realize that you left yourself a safety valve.

"In response," you say, "I'll tap 8 mana and sacrifice my Shore Keeper to draw three cards."

Fortunately, none of those three draws is a land: You pull a Spell Swindle, a One With the Wind, and a Buccaneer's Bravado -- the last of which can save your Hunter! You reach for the Treasure tokens you've stashed off to the side, andâ.â.â.â

"Wait," you say, "why do I only have one Treasure token?"

Qian gives you a curious look. "You've only had one Treasure token for a while now," she points out.

"Yes, but I thought I hadâ.â.â.â" you begin, and then you realize that you shouldn't have cast that Mist-Cloaked Herald a few minutes ago. If you didn't cast the Herald, you would have had an extra untapped Island, which would then allow you toâ.â.â.â ugh.

Qian waits patiently as you reassess your position, which leads you to one conclusion: You don't have the ability do anything else during her combat phase. "No other plays from me," you grudgingly admit.

"Okay," Qian says. "So your Dinosaur Hunter takes two damage and dies. My Pterodon kills your Siren Lookout, your Spire Winder kills my Exultant Skymarcher, and you take three damage."

"And get a Treasure token from the Skymarcher?"

You grumble at the irony. "Yes, Revel in Riches gives me a second Treasure token."

"I'll cast a second Rigging Runner with its Raid effect, and then end my turn."

As if to twist the knife a little more, your next draw is an Expel from Orazca that you could have definitely used earlier. At 3 life and facing three flyers, however, you now need to find a way to surviveâ.â.â.â or at least buy yourself a little more time.

On the other hand, you could take a third option and try to win the game. But how can you possibly do that, considering how close your back is to the wall right now?

It is the start of your first main phase. Defeat Qian before she defeats you. 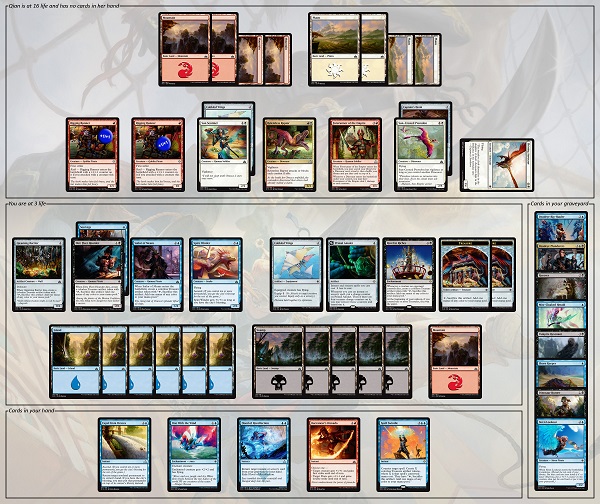 You have not yet played a land this turn. You still have a number of cards in your library, but you know neither the identities nor the order of these cards.

Qian is at 16 life and has no cards in her hand. She has the following cards in play:

You do not know the identities of any of the remaining cards in Qian's library. You have no knowledge of what Qian is likely to do during her next few turns.

If you think you've got a great solution in mind, don't put it in the comments! Instead, send it to puzzles@gatheringmagic.com with the subject line "Puzzle -Hand Over Fist" by 11:59 P.M. EST on Sunday, February 4, 2017. We'll include the best ones in next week's article along with the next puzzle!

"This is one of those good news/bad news puzzles," Greg Dreher writes.

"So to win, you need a good creature that Thulani can't block."

Your best creature actually isn't a creature just yet. The Dusk Legion Dreadnought can be a 4/6 creature with vigilance as long as you can meet its crew requirements, but that shouldn't be too difficult. Getting it past your opponent's blockers, however, is the real issue.

"Luckily," Addison Fox points out, "Cherished Hatchling has a loaves-and-fishes-like property, in that it turns our removal spells into additional removal spells as long as we have Dinosaurs in hand to capitalize on it."

The only other hurdle to consider is the fact that, although you do have Dinosaurs, you don't have enough of them to remove all of your opponent's blockers. But Cherished Hatchling's ability does give you some working room, as Max Williams writes:

"One cute feature of this puzzle," Addison adds, "is that thanks to the Cherished Hatchling's trigger, everything can be done entirely in the Declare Attackers step of combat for no value other than novelty."

"If you think about it," Chris Billard notes, "you can probably excuse the Sailor of Means and Looming Altisaur. Seeing a Dusk Legion Dreadnought piloted by a dead Cherished Hatchling flying overhead would probably be a bit distracting."