Login
0 Item
Advanced Search
Sign In
Create Account
The Unabridged Cube has been temperamental lately, especially when it comes to Sealed Deck tournaments. The players at your local game store have reported getting card pools that were either too unstoppable for their own good, or downright impossible for any prospects at winning. Of course, the Cube does have one of each card ever printed, so anyone has a likely chance of getting an extreme selection of cardsâ.â.â.â but you wonder if it has a mind of its own sometimes.

Considering that your 40-card deck today tries to win the game by stalling your opponent until their library runs out, it's safe to say that your card pool is of the latter type. Unsurprisingly, you have yet to win a single game.

deck, which has the customary boatloads of removal spells. However, Ricky's creature base isn't much to look at, and hinges mostly on a couple of mythic rares. That means that you've managed to hold the line so far, but you're not sure how much longer you can do so.

On his last turn, Ricky drops a Mana Flare into play. You immediately realize that that spells trouble, even before you can see the grin on your opponent's face.

Without the Cobra, you suddenly realize that you're more than a little defenseless, especially since your Tracker has yet to recover from summoning sickness. "In response, I'll have Fatestitcher tap your Spirit," you say.

"And I'll finish off my turn by casting an Aether Flash."

You shake your head. It could be worse, though -- Ricky might have been playing something that depended on a Storm count. At least he no longer has any cards in his hand, you suppose.

You untap your permanents and are about to draw your card for the turn when Ricky clears his throat. "Cursed Land?" he asks.

"Oh, sorry. I'll take one damage from that and go to five life."

"And one more damage from the Unraveler once you draw your card?"

"Four life, then," you say, a little irritated.

You really need a creature at this point, and that's why your deck doesn't give you one. Instead, your draw is a Displace, although it's at least marginally better than the Quest for Ancient Secrets you already hold.

"So what's your move?" Ricky asks. "Obviously you're not going to be able to wait me out here like you're expecting to do."

You count your cards first, eventually coming to the conclusion that you don't have enough to pull this one out. Ricky doesn't have many cards remaining in his library, but they're still too many for you to deal with. It looks like you have to consign yourself to another loss today.

It is the start of your first main phase. Defeat Ricky before the beginning of his next combat phase. 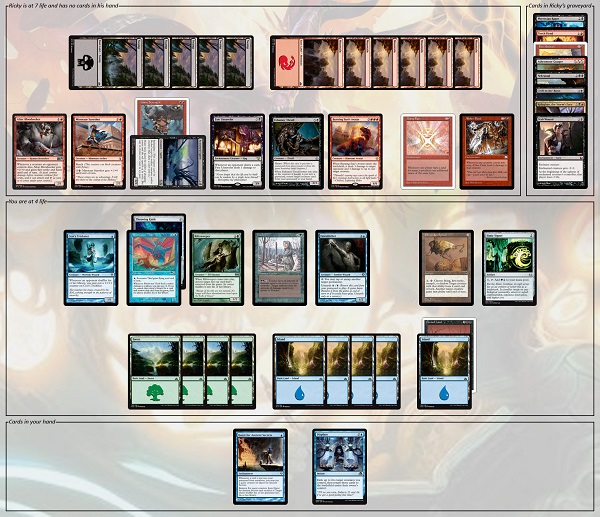 You have not yet played a land this turn. You do not know the identities or order of any of the cards remaining in your library. You have no relevant cards in your graveyard.

Ricky is at 7 life and has no cards in his hand. He has the following cards in play:

Ricky has the following cards in his graveyard:

If you think you've got a great solution in mind, don't put it in the comments! Instead, send it to puzzles.gatheringmagic.com with the subject line "Puzzle -- Shuffle and Cut" by 11:59 P.M. EST on Sunday, February 25, 2017. We'll include the best ones in next week's article along with the next puzzle!

"Working this in reverse," Subrata Sircar writes, "we can win by dealing four damage in combat, plus two from the Mortis Dogs dying again.

"In order to deal four damage in combat, we would need to attack with three creatures - two of which should have Menace - and probably have the Vampire Hounds and the Hound of the Farbogs get blocked while the ThrabenFoulbloods get through.

"In order for that to happen, we would need to hit Delirium, which means that we'll need to figure out how to get four card types in our graveyard. The most likely approach is to get a creature, land, instant and enchantment in our graveyard."

It's especially notable that you won't be able to get a sorcery card into your graveyard barring some shenanigans with Greater Mossdog. This is because your only sorcery card, Treasured Find, exiles itself as part of its resolution. It's possible to get Treasured Find into your graveyard with a bit of maneuvering: You could, for example, cast it targeting the Mossdog, then use an instant-speed card draw effect, replace it with the Mossdog's dredge ability, and let the Treasured Find get countered on resolution. However, your resources are such that you would only be able to use this with Wild Dogs' cycling ability after combat takes place.

Still, it's possible to get all four card types into your graveyard with a little help from the Mossdog. "We have a total of eleven mana available," Addison Fox writes, "assuming that we are sacrificing a creature to Phyrexian Tower at some point (spoiler alert):

This, of course, assumes that you're getting the extra 2 points of life loss from Mortis Dogs. But there's another place where you can find 2 damage, and it's on Saluki's side of the table -- her 2/2 (currently 2/3) Sell-Sword Brute.

"The key to solving this puzzle," Ryou Niji points out, "is noticing that only Patriarch's Desire can really change the board state. It's currently stuck on Exuberant Firestoker, so unless we turn on threshold somehow, we won't be getting anywhere.

"We only have two chances to get a card into our hand this turn: the card draw from Overwhelming Instinct, and the Treasured Find. (The card draw from Bone Harvest is probably too late since the rest of our cards are sorcery speed.)We probably can't achieve threshold if we don't dredge Greater Mossdog instead of drawing; Treasured Find therefore needs to return Patriarch's Desire if we want to do anything useful with it."

Ryou's solution therefore depends on getting enough mileage out of the Patriarch's Desire:

"Saluki built up a pretty gummy board," Addison muses, "but thanks to the magic of Menace giving them a virtual -2 blockers, we were able to turn this puppy around." Perhaps she should have just let sleeping dogs lie.