Login
0 Item
Advanced Search
Sign In
Create Account
It's the first game of the second match of today's Unabridged Cube draft, and you're sitting across the table from someone resembling the stereotypical mad scientist -- goggles, white coat, gloves, excessively bristly hairstyle, and all.

You sigh. If the Unabridged Cube can contain one of each card ever printed, it's not much of a stretch to assume that your local game store can attract one of every single player out there. Still, you find yourself wondering what your opponent's up to; the only thing you know so far is that he hasn't said a single word since you started your game.

Then you realize something: Back when you were checking this round's pairings, you caught a glimpse of your opponent's name and figured that it was nice playing against someone you knew. Which means thatâ.â.â.â

Your opponent glances up at you, and for one moment you think you see a flicker of madness in their eyes. It takes you a few seconds before you conclude that she's wearing colored contact lenses.

"Another photoshoot?" you ask.

"Commercial," she says. "Sorry I can't talk much. Prosthetic needs to harden."

"You're wearing a prosthetic?"

"A little bit of jaw," she says, somehow smiling without smiling.

You wonder what kind of commercial would need someone to dress up as, wellâ.â.â.â whatever Octavia looks like right now. You guess that it might be for a new form of technology or some environmental cause, which means that you've probably got it wrong and it most likely involves some new brand of hair gel. But that's a question for another day.

Octavia gestures toward her attacking Sunspire Griffin and Dungeon Shade. She's paid three mana to pump the Shade to a 4/4, which means that both creatures are surviving the Lightmine Field that's stopping your offensive line.

Unfortunately, your Giant Spider was the victim of a Puncturing Light on a previous turn, and you've run out of cards in hand, which means that you have no aerial defenses to speak of. "I'll take that six damage," you say, "unless you're tapping that last Swamp of yours."

Octavia simply gestures toward her Drudge Skeletons, which indicates that she's saving the mana for its ability. That's fair, you think.

Octavia taps all of her Plains to cast a Cathar's Companion, then passes the turn to you. You peel a Might of the Nephilim off the top of your deck, then look to see how you might be able to salvage this game.

The Lightmine Field is probably your greatest obstacle: Anything that you use to attack has to get through the Field first, and then you have to figure out some way to deal with blockers like Drudge Skeletons and Deathgazer. You don't have any easy solutions for either, so you'll need to find a way to improvise.

The problem is that, with your life total at 5, you don't have a lot of time to fight your way out of this situation. But maybe you can manage with a little bit here, and a little bit thereâ.â.â.â 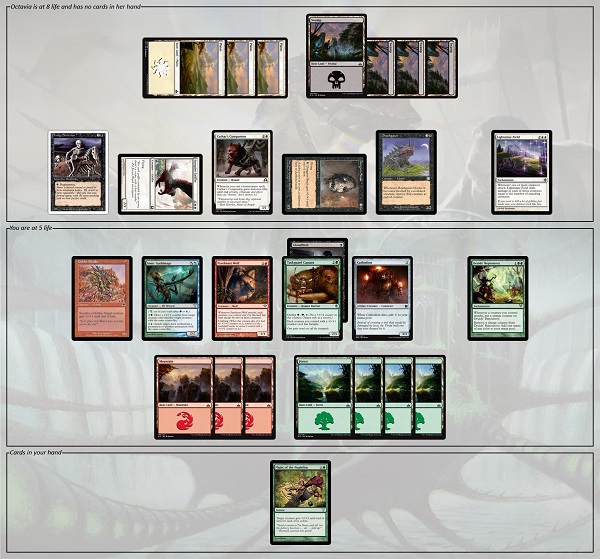 Octavia is at 8 life and has no cards in her hand. She has the following cards in play:

If you think you've got a great solution in mind, don't put it in the comments! Instead, send it to puzzles@gatheringmagic.com with the subject line "Puzzle --Through the Minefield" by 11:59 P.M. EST on Sunday, March4, 2018. We'll include the best ones in next week's article along with the next puzzle!

"This puzzle required figuring out a lot of little tricks," Jonah Comstock writes. "Luckily, Mana Flare gave us a whole lot of mana to work with, and this solution will use nearly all of it.

"The key is to use and re-use Phyrexian Splicer (using Fatestitcher to untap it) in order to give everything the exact keywords they need. Cosi's Trickster needs flying to get in, and Rootwater Thief needs first strike so that it can use its ability for another shuffle before Trickster hits. I had to read the puzzle about five times to find where first strike was hiding, but it's right there on Altac Bloodseeker, provided you can kill something first, which is easy enough to do with Tracker - and the Tracker can get that pesky reach blocker out of the way while he's at it."

This was the idea behind the most common solution submitted for this puzzle. As Greg Dreher writes:

Rootwater Thief isn't the only source for exiled cards on this table, though, and that opens an alternative solution. "This one was a real headscratcher," Sean Rowe writes. "I got really hung up on the Tracker, because you can actually use it to eliminate two creatures using the rules of the game and the bizarre wording of its ability. But once I realized I was two mana short for what I wanted to do, I had an epiphany that Fatestitcher can essentially remove a blocker for a turn -- and that's all we need:

Then again, you could always ignore all the shuffling and take the direct route, as Eric Weeden writes:

"Ricky made a critical mistake last turn," Addison Fox remarks, "casting Mana Flare and not killing us immediately before we get to use it. Maybe in a Commander game, letting that effect sit out on the table gets you a pat on the back, but in 1v1, it means we get to pretend our spells and abilities are free."