Login
0 Item
Advanced Search
Sign In
Create Account
With Masters 25 previews taking place, some of the new cards have started to appear in your local game store's Unabridged Cube. So far, you've seen one player run a vicious combo between Ravenous Chupacabra and Vedalken Mastermind, as well as another player nailing a Shivan Dragon with a well-timed Arcane Denial. Such is the order of things, after all, when you're dealing with one of each card ever printed.

On your part, you found a single Masters 25 card in your Sealed pool. Nettle Sentinel isn't exactly the flashiest card to have, but you're playing

anyway, and it makes for a fair 1-drop.

Unfortunately, you soon ran into two problems. The first was that Nox is your first-round opponent, and he's a player who holds a very long grudge against you from several previous games. The second is that Nox pulled a Masters 25 card himself, and he chose a very good moment to wipe the table with his Armageddon.

Several turns after losing all your lands, you're still trying to recover. You managed to draw a couple of Mountains and stick a Wild Growth on one of them (after which Nox killed your Llanowar Elves with a Stabbing Pain). However, you've barely been able to slow down his attackers, and all you have left are a few creatures that won't be able to hold the fort for much longer.

"You're at 14 life," you point out, scribbling the number down on your scorepad.

Nox taps his Swamp and drops an Unholy Strength on his Phyrexian Negator. "I'm 15," he says. "God-Pharaoh's Faithful gets me that one life back."

You nod. You yourself are at 3 life, and he knows it. Nox is obviously gearing up to deal as much damage to you as possible, so his next move doesn't come as a surprise.

"Attack with everything," Nox says, grinning. "Any blocks?"

"No blocks," you say, tapping your enchanted Mountain. "Can you get past a Fog?"

Nox stares at the table for a moment, and his expression changes to one of contempt. "Fine," he growls, "go ahead and take your turn."

You untap your lands and draw a Browbeat, which you immediately cast.

Nox takes one look at the card and scoffs at you. "You can have your three cards," he says.

"You're not going to stop me?"

"It's not like you're going to be able to do much of anything with me at 15 life," Nox says. "You might as well sign that match slip right now."

You'd rather not give Nox the satisfaction of your concession, but you have to admit that things aren't looking very good for you. The Browbeat does give you some nice cards -- a Pulse of the Tangle, a Mistcutter Hydra, and a Mutiny -- but you have yet to figure out how they can get you out of this situation.

You can see Nox drumming his fingers on the table now, just waiting for you to make a move. Considering that you haven't failed to pull a game out from under him just yet, it seems a shame for you to start now.

It is the middle of your first main phase. Defeat Nox before the beginning of his next combat phase. 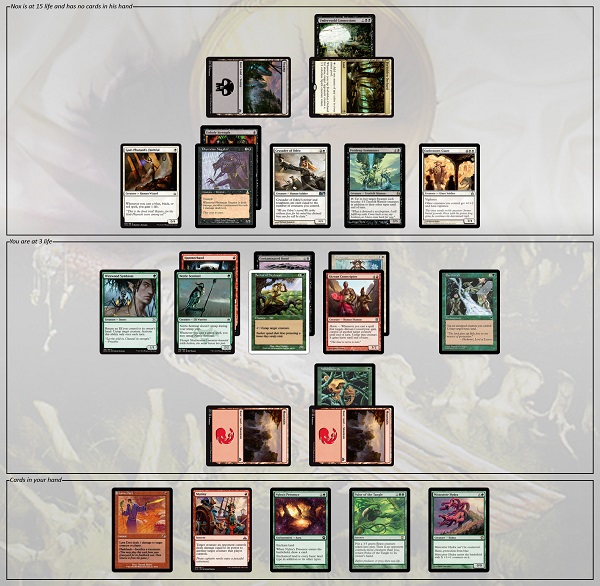 You have not yet played a land this turn. You do not know the identities or order of any of the cards remaining in your library. You have cast only one spell so far -- Browbeat.

Noxis at 15 life and has no cards in his hand. He has the following cards in play:

If you think you've got a great solution in mind, don't put it in the comments! Instead, send it to puzzles@gatheringmagic.com with the subject line "Puzzle -- Post-Apocalyptic" by 11:59 P.M. EST on Sunday, March11, 2018. We'll include the best ones in next week's article along with the next puzzle!

"That minefield might be enough to stop a few goblins (as the flavor text says), but it won't be able to stop us," Matthew Harvey writes. "The trick to all of this is getting the most out of everything we have, namely Might of the Nephilim. As this little combat trick cares about how many colors our creature is, we already have a two-color creature with Simic Guildmage. Little does Octavia know that her Ghoulflesh is going to be the key to her downfall."

"It's obvious that we'll need to cast Might of the Nephilim on something," Jonah Comstock continues, "and the Simic Guildmage seems like the best candidate, given that it gets +4/+4 where everything else gets +2/+2 at best. But we can get even more oomph out of the spell by using the Guildmage's ability to grab Ghoulflesh and add a third color. And we can then get rid of the drawback by grabbing the aura, casting the spell, and then shipping the aura off again.

"The only trick is, to get the Blue mana we need for these shenanigans, we're going to have to attack with at least two creatures and then commit to doing a whole lot of durdling after attackers are declared and before blocks. We also need to kill our poor wolf friend twice to put him to use as a counter factory."

Ed Grabianowski's solution follows this logic. There is a certain order to the steps you have to take here, mostly because you have to work around Lightmine Field and several triggers:

At this point, even if Octavia blocks with all her available creatures, she still absorbs a total of 8 trample damage.

With up to three possible sources for a +1/+1 counter available, it's possible to end up with multiple trampling creatures on your side. One alternative uses this to its advantage by dividing 12 total power among multiple creatures. Chris Billard writes:

"Attack with one less creature," Ryou Niji observes, "and we wouldn't have enough mana. Attack with one more creature, and we couldn't save Simic Guildmage from Lightmine Field without casting Might of the Nephilim prematurely (before we have any Blue mana, and thus before any aura-moving shenanigans). Three is the sweet spot."