Youâre currently in the second game of your match against Alcione. Alcione somehow managed to draft a five-color deck with seven Dragons in it, and you only found this out after three of them showed up in your first game. After a sound beating that is better imagined than described, you adjusted your tactics.

So far in this game, youâve managed to hold the line despite your opponentâs fast start. Things are looking good: You used a couple of removal spells to bring down Alcioneâs first two Dragons, and you have a Trap Essence in your hand just waiting for the next one she summons.

On your last turn, you cast Write into Being and found a Windstorm on top of your library. Thatâs useful, you thought, manifesting the other card (a Roar of Challenge) and leaving the Windstorm on top. You then attacked with your Mystic of the Hidden Wayâ.â.â.âand walked right into the Whisk Away that Alcione had been holding. Ouch.

Alcione then took her turn and did something you didnât expect: She cast Sight Beyond Sight and then dropped Descent of the Dragons, transforming four of her creatures into 4/4 Dragons! At that point, you were able to stop her Herdchaser Dragon from attacking, but at the cost of the last gem counter on your Briber's Purse.

You untapped and drew your Mystic of the Hidden Way, cursing the fact that your Windstorm lies just beyond your reach. Unless you do something quickly, Alcioneâs next turn will bring you an even worse beating than your previous game!

It is the middle of your first main phase. Remove all of Alcioneâs Dragons from the battlefield this turn.

You are at 5 life with the following cards in play:

You currently have a Windstorm on top of your library. Beyond this, you are not aware of the identities of any of the other cards.

Alcione is at 17 life, has no cards in her hand, and has the following cards in play: 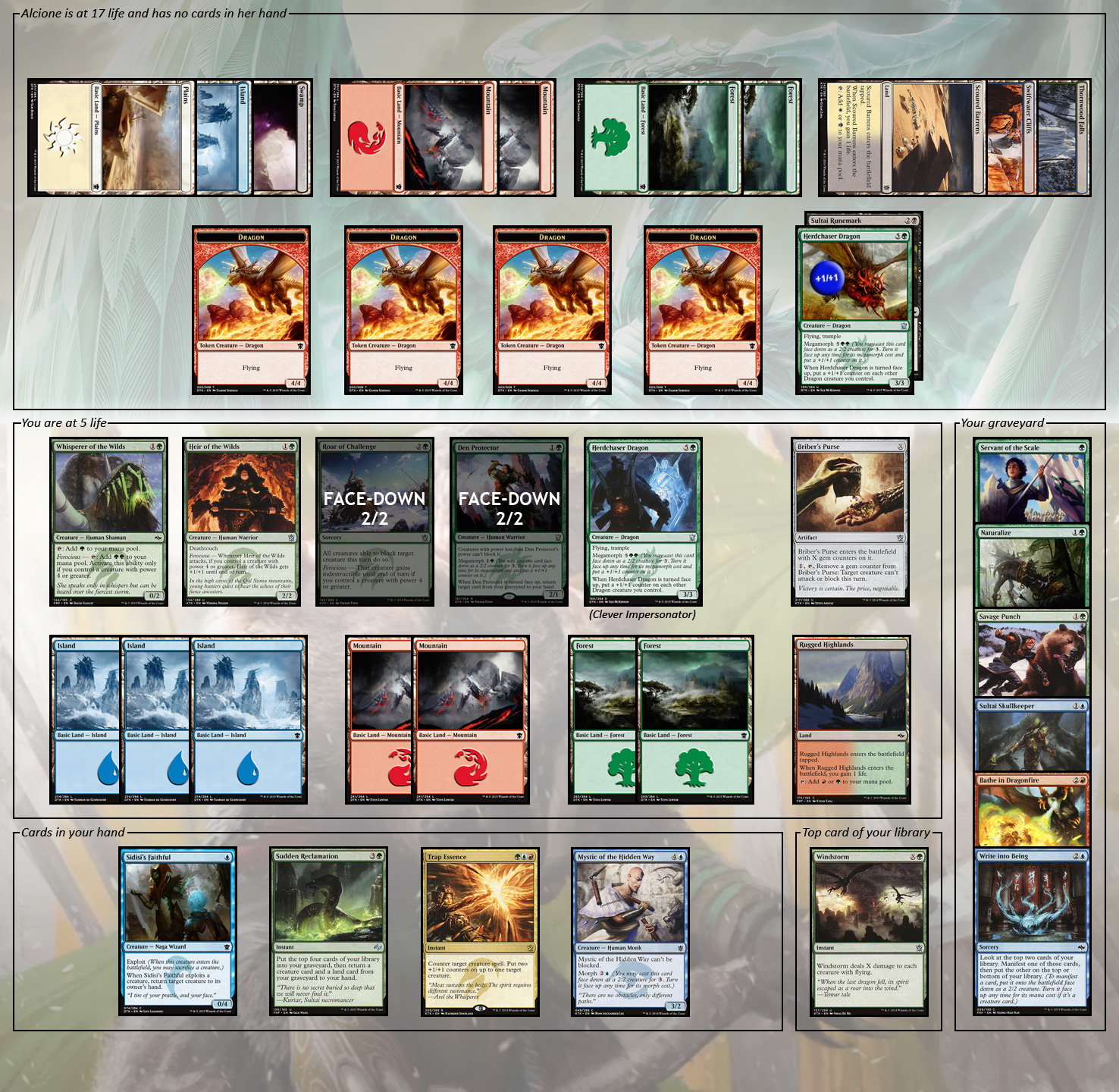 Imagine the same situation as above, with one exception: Your Heir of the Wilds is a Kolaghan Aspirant instead. Would it still be possible to remove all of Alcioneâs Dragons from play this turn? If yes, how would you do it? 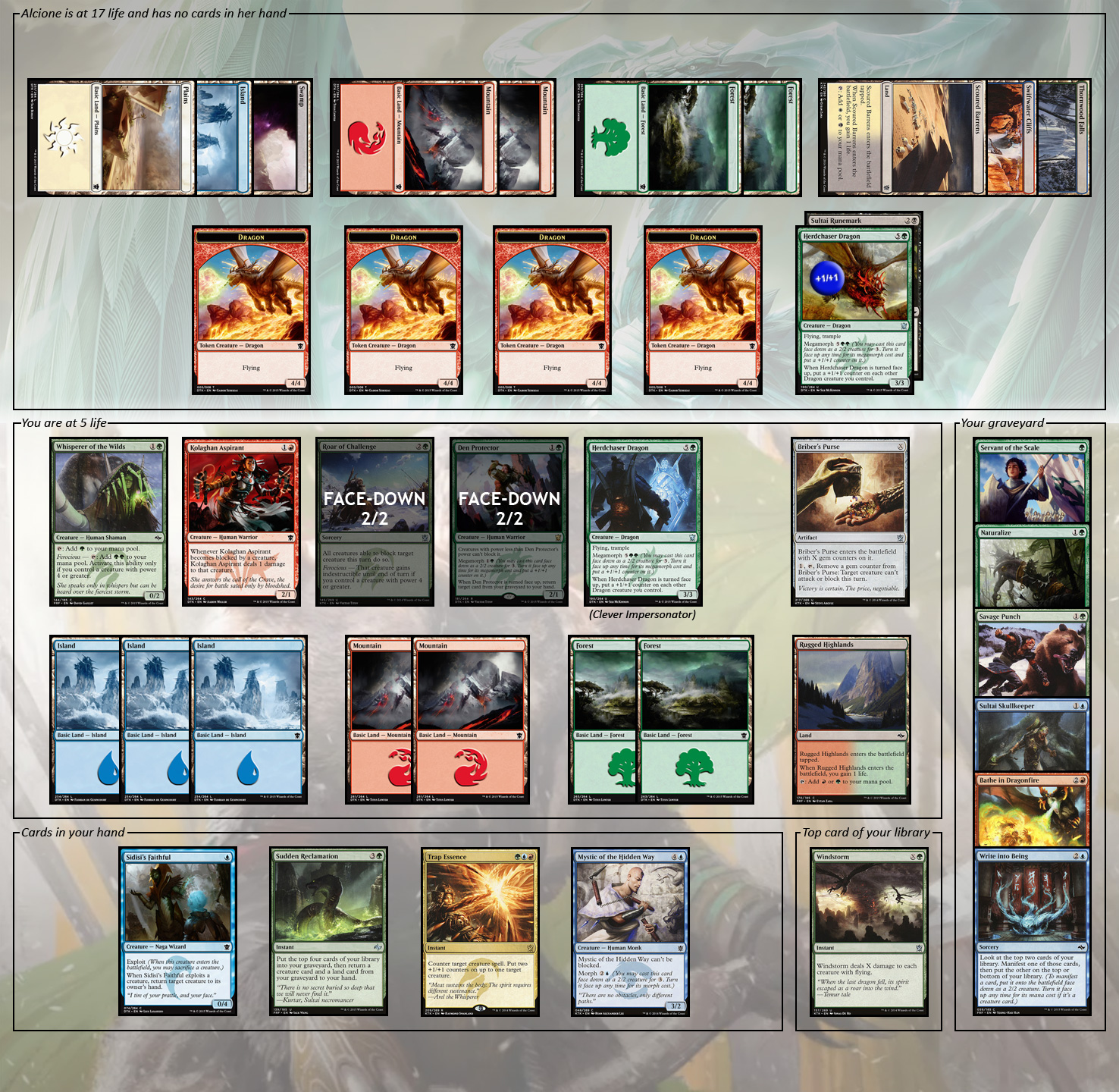 If you think you have a great solution in mind, youâre welcome to send it to puzzles at gatheringmagic dot com with the subject line âPuzzle â Dracophobiaâ. Weâll include the best ones in next weekâs article along with the next puzzle!

Apologies to everyone: Last weekâs puzzle had a solution, which was identified correctly by Matthew Roman. However, Matthew also points out that this solution has a problem â which Iâll cover in the summary below.

The puzzle has a very troublesome sticking point: With so many interactions on the table, what do you do, and in what sequence? All respondents came up with the same base idea: Bring Diregraf Captain into play and then start killing your own Zombies to trigger the Captainâs life-loss ability.

The problem at this point is that you have limited means to destroy your own creatures. In his solution, however, Max points out that if you can bring your Gravespawn Sovereign into play, the Subterranean Shambler on Semirâs side of the table can be turned to your advantage.

From here, your steps would be:

The above stepâs timing is important: If we had unearthed the Rotting Rats before attacking with the Cadaver, Semir may have put his Dodecapod into play, producing an additional artifact creature blocker.

At this point, Semirâs hand is empty, and the Dodecapod should now be in play with two +1/+1 counters on it.

Tap an Island to play Fate Transfer, moving both +1/+1 counters from Dodecapod to Diregraf Captain. Diregraf Captain is now a 4/4 creature. Your hand is now empty (1 Island, 1 Swamp remaining).

That said, Matt clarifies the issue with this original solution: "Myr Retriever returning an artifact to opponents hand makes it so Semir has five cards in hand, meaning that Howltooth Hollow canât be used." Again, I apologize for the error.

Evelyn's and Mitch's solutions both observed that if Semir discards his Dodecapod at first opportunity, you could cast Fate Transfer to move its two +1/+1 counters to Haunted Cadaver before your combat step and then attack with a 5/5 Haunted Cadaver and finish off Semir by killing four Zombies. While this path is a lot easier than the above, you have no guarantee that Semir will discard Dodecapod first (especially if, as Evelyn points out, he knows that you have a Fate Transfer in hand!).

Note that moving the +1/+1 counters from Dodecapod to your Diregraf Captain had a purpose: Without the counters, Diregraf Captain would die once the Subterranean Shamblerâs leaves-play ability resolves, and it wouldnât be around for the death of your Zombie token.

For the bonus question, itâs indeed possible to defeat Semir at 10 life. To do this, note that you make an additional Zombie token from Curse of Shallow Graves and that the last possible moment you can remove Semirâs blockers is just before he declares them.

Follow the above solution until the point where you get Diregraf Captain into play. Choose not to tap Stronghold Assassin for its abilityâ¦ yet.

From here, follow the remaining steps of the above solution, which will destroy your tapped Zombie token on the resolution of both Subterranean Shambler abilities, and it will cause Semir to lose an additional 1 life.