"I think it was a practical decision," Mari says. "The store's in the middle of a shopping area, and they all chose not to open this weekend."

"Oh, I understand that," CJ says. "What I don't understand is how we can be so lucky."

"You mean the boxes," you say.

"Yeah, the boxes. I get to hang around with you guys for two months in a house that's as big as my entire neighborhood put together, and I score a free booster box of Ikoria? Best vacation ever."

"Assuming that you don't count what happened with the expired drink mix."

"I stand by my statement," CJ says.

"I'm just surprised that the package managed to make it here," Cécile notes.

"Or that we managed to remember where the front door was," Mari whispers to you, under her breath.

"The twins' parents must have put in a pre-order," Cécile explains. "I heard that a few stores built up their stock expecting a change in the release schedule, so these boxes might have just been waiting for a delivery date. It might be just coincidence that they arrived today."

"One box for each of us sounds good," you point out. "As far as I'm concerned, they can thank us anytime."

"We know that they can afford them, at least," Cécile says. "But can we get back to the game, though? I need to know if you're blocking my Cavern Whisperer."

"Sorry," you say. "How big is it again? I haven't exactly gotten used to what the new cards do."

"I mutated a Dreamtail Heron under it," Cécile says, so it's a Cavern Whisperer with Dreamtail Heron's abilities. That makes it a 4/4 creature with flying and menace. The other abilities only trigger if it mutates again, so they don't matter right now."

"Right," you say. "I've got a Gloom Pangolin with a Vulpikeet mutated over it... so that's a 2/3 with flying... wait, no, it got a +1/+1 counter when it mutated, so it's a 3/4 flyer. Then there's this Migratory Greathorn that I mutated over a Helica Glider, so that's a 3/4, and it's got a flying counter from the Glider and a vigilance counter from my Keensight Mentor. Did I get that correct?"

"I'll put both of them in front of your Cavern Whisperer," you say. "Menace and flying, right? I'm hoping that you don't have any tricks."

"I've got an Unlikely Aid," Cécile says. "Do you have anything?"

"Nothing aside from a lot of regret," you sigh. "So it's an indestructible 6/4 now. Which one are you killing in combat?"

"The Vulpikeet and Pangolin," she says. "I'll put the last one damage on your Greathorn."

"Okay," you say, dropping the two creature cards into your graveyard.

"Then I'll cast Lurking Deadeye and destroy your Migratory Greathorn."

"Ouch," you say, raising an eyebrow.

"You were the one who chose to block," Cécile points out.

Mari laughs, and you glance at her. "Maybe I should have tapped down the flyer instead of her Void Beckoner," you muse.

"Like dealing with an 8/8 deathtouch creature is a whole lot better," Mari says.

You take a deep breath. "Okay," you say, "I'll just sacrifice the Greathorn to my Bushmeat Poacher in response. That gives me four more life and an extra card draw."

"Fifteen life," you say, peeling a Titanoth Rex off the top of your deck. "I'll take comfort in the fact that I can at least get something back with my Offspring's Revenge."

"I still think that that enchantment isn't something I'd splash in a three-color deck," Cécile adds.

You untap your permanents and draw into a Solid Footing, wondering how to handle the board at the moment. You and Cécile are about even, but she's slowly backing you into a very defensive corner, and you're not sure how much longer you can last.

"That doesn't look good at all," you agree.

"I think you have the win," Mari adds.

It is the start of your first main phase. Defeat Cécile before the beginning of her next combat phase. 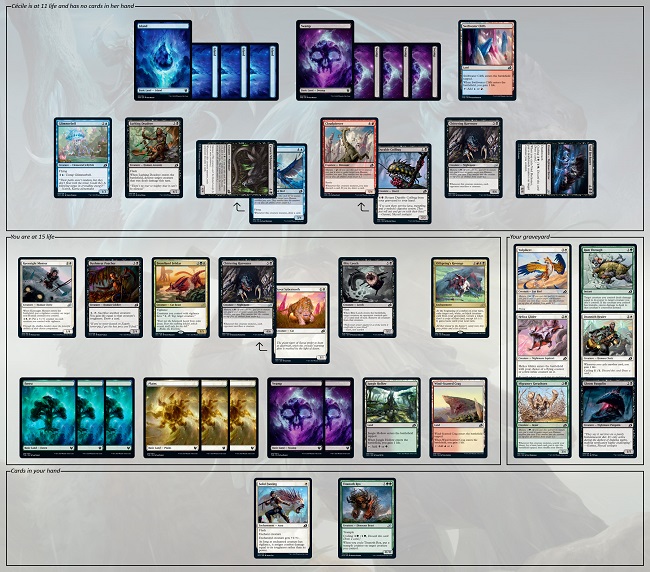 You are at 15 life, with the following cards in play:

Cécile is at 11 life and has no cards in her hand. She has the following cards in play:

Instead, if you think you've got a great solution, you can send your solution to puzzles@gatheringmagic.com with the subject line "Puzzle - The Other White Meat" by 11:59 P.M. EST on Monday, May 25, 2020. We'll include the best ones in next week's article along with the next puzzle!

With your opponent at 14 life, two turns at your disposal, and more than a few permanents on the table, you have a lot to do for this one. However, the first thing worth noting is that your permanents can't deal damage to CJ until the beginning of his next turn, and even then you don't quite have enough:

This means that you need to look for other sources of damage. CJ's Eon Frolicker may protect him from damage coming from your permanents, but it doesn't prevent him from taking damage from his own:

Impending Doom represents a further problem, though: It compels your Coalition Honor Guard to attack, and you don't want it running into your opponent's Humongulus - giving them an extra two life and dying in the process. This will put a damper on your plans, seeing that it leaves CJ at 16 life with your maximum remaining damage output at 15.

In addition to the above, David Arnold prefaces his solution with the following notes:

On your first turn:

On your second turn:

On CJ's turn, CJ no longer has protection from you, so:

This solution has at least one variation, which doesn't involve putting Faith Unbroken on your Thoughtbound Primoc. Instead, Michael Feldman points out that you can move it to your conveniently-removeable Kor-Line Slinger:

At the beginning of the end step on your first turn:

On your second turn:

Using the above sequence instead of the Thoughtbound Primoc play eventually gives you one extra damage, which you can throw against any available target.

"CJ's complicated plays might look like all he really wants, but they're not perfect," Michael adds. "Does he have his full attention on the game or is one hand in his pocket? Maybe he'll learn - probably not. And no, under no definition is that ironic, even if it is a jagged little pill for him to swallow."