You glance at the board. "Well," you say, "you're playing a Contaminated Ground. I think that's a fair indication that your draft has gone south."

"It's not my fault the cards weren't coming. Stupid Unabridged Cube."

"It's bound to happen when you're drafting with one of each card ever printed, you know."

Your local game store hasn't received its Battlebond shipment just yet, so you and about twenty other players have had to content yourselves with individual previews once more. Unlike previous outings, you ended up with a fast

deck that you easily piloted to a couple of victories. The quality of Mari's

deck, however, is better imagined than described.

"If you're done complaining," her opponent calls from across the table, "I'd like to start my turn in earnest."

Grace gives a dissatisfied look as she taps her Vectis Dominator. "Tap your face-down creature?" she asks.

Grace nods and glances at the Contaminated Ground enchanting one of her Plains. "This turns the land into a Swamp, right" she asks.

Grace taps all seven of her lands and plays the last card in her hand, a gigantic Chancellor of the Dross. "I'll take two and go down to seven life," she says. "And if you're making faces at me right now, I must say that I find that very childish."

You glance at Mari, whose expression is now also better imagined than described. "I don't think she's doing it deliberately," you explain. "She's probably just going through her profanity filter."

"Tell her that I'm done with my turn, then," Grace says.

To her credit, Mari recovers quickly. She untaps her permanents, then draws and adds a Fumble to her hand. This seems to give her an idea as she starts studying the board.

It is the start of your first main phase. Defeat Grace before the beginning of her next combat phase. 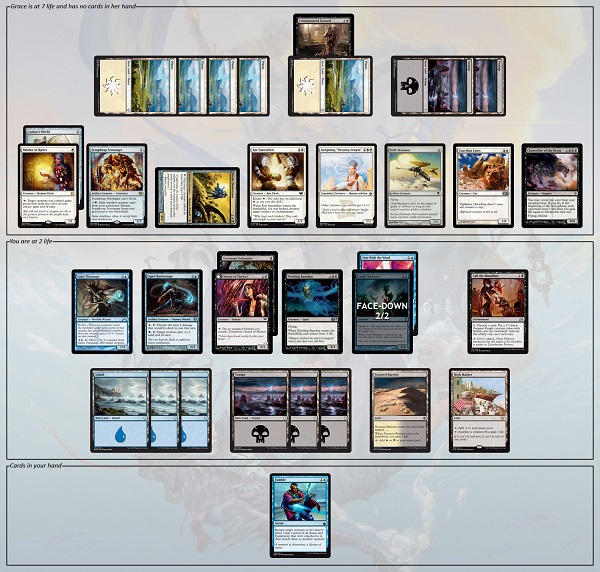 Grace is at 7 life and has no cards in her hand. She has the following cards in play:

If you think you've got a great solution in mind, don't put it in the comments! Instead, send it to puzzles@gatheringmagic.com with the subject line "Puzzle -- All Thumbs" by 11:59 P.M. EST on Sunday, June 10, 2018. We'll include the best ones in next week's article along with the next puzzle!

"You have a creature that's potentially big enough to kill Mutt in one hit," Greg Dreher writes."Your only possible form of evasion is flying, but Mutt has three flying creatures. The solution is obvious: Make it so he has zero flying creatures."

deck? That does mean we need to activate the ability of Radjan Spirit three times and then kill it somehow, but Chakram Retriever has us covered."

As Greg and Ryou imply, most of this puzzle involves getting your Artisan of Forms to copy Mutt's Radjan Spirit. Addison Fox's solution elaborates on this:

Mutt can also activate his Radjan Spirit at any time to remove flying from any creature (our Launch-enchanted Artisan of Forms, for example). However, his only relevant move would be to use the Spirit to try and remove flying from the Grim Striderâ.â.â.â and that's not possible with the sequence above.

There are a lot of minor variants to this solution: You could remove flying from Mutt's three creatures in any order, for instance. At the beginning of the sequence, there's also the possibility of casting Crippling Fatigue on the Radjan Spirit, then using the two activations of Disciple of Tevesh Szat to bump off the Stealer of Secrets.

One of the more curious variants, though, involves the fact that you can have Artisan of Forms copy anything based on the final Crippling Fatigue trigger. So if you wanted it to survive in style, you could have it copy the Oversoul of Dusk -- having copied the Radjan Spirit by this time, your Artisan is a Green creature when this happens. The Oversoul's protection from Black ability, of course, then causes the Crippling Fatigue to counter itself.

Sean Patrick Keatley points out that there's an interesting alternative solution to this puzzle, though:

"In the end," Russell Jones remarks, "Mutt takes 6 damage (to 0), and everyone goes home empty-handed. After all, who needs hands when you're a dog and can carry everything in your mouth?"