You got to a fast start in the third game of your Modern Masters 2015 Edition Draft match, dropping creatures on your first three turns and getting your opponent Lorena down to single digits. After that, however, Lorena managed to stabilize the board by playing several artifacts, eventually allowing her Rusted Relic to hold the ground as a 5/5 creature.

Once all of her defenses were in place, Lorena started making attacks against your life total. She didnât make very good progress thoughâyou simply kept blocking her Rusted Relic with your weakest creature and then sacrificed the creature to your Culling Dais. Eventually, you built up quite a few counters on the Dais, although you lost most of your offensive line in the process.

The turn after Lorena tapped out to cast her Aethersnipe (sending your Chimeric Mass back to your hand), you decided to make your move. Your first order of business was to sacrifice your Culling Dais. Ending up with six cards against Lorenaâs empty hand, you found yourself behind on board presence but well ahead on card advantage.

At that point, your friend Mari (who had been watching the game all this time), started waving her arms frantically. You and Lorena both gave her a strange look, which only got her even more excited. After a couple of other spectators gained the head judgeâs attention, Mari finally quieted down and you continued the game. Your card advantage and a couple of good draws were enough to overrun Lorenaâs position, and you sealed the deal a few turns later.

The moment you gathered up your cards and left the table, you found Mari making strangling noises at you.

âThere is something seriously wrong with you,â you tell her.

âWhen you sacrificed your Culling Dais!â Mari almost screams at you.

Mari calms down about as much as you can expect after a few deep breaths. âYou sacrificed your Culling Dais,â she says, âand you had those six cards in your hand. I saw how you could grab the win on that very same turn, but I couldnât tell you in front of everyone!â

You think back to that critical point in the game. You know that Mariâs certainly a very excitable person. But is she right?

It is the middle of your first main phase. Defeat Lorena this turn. 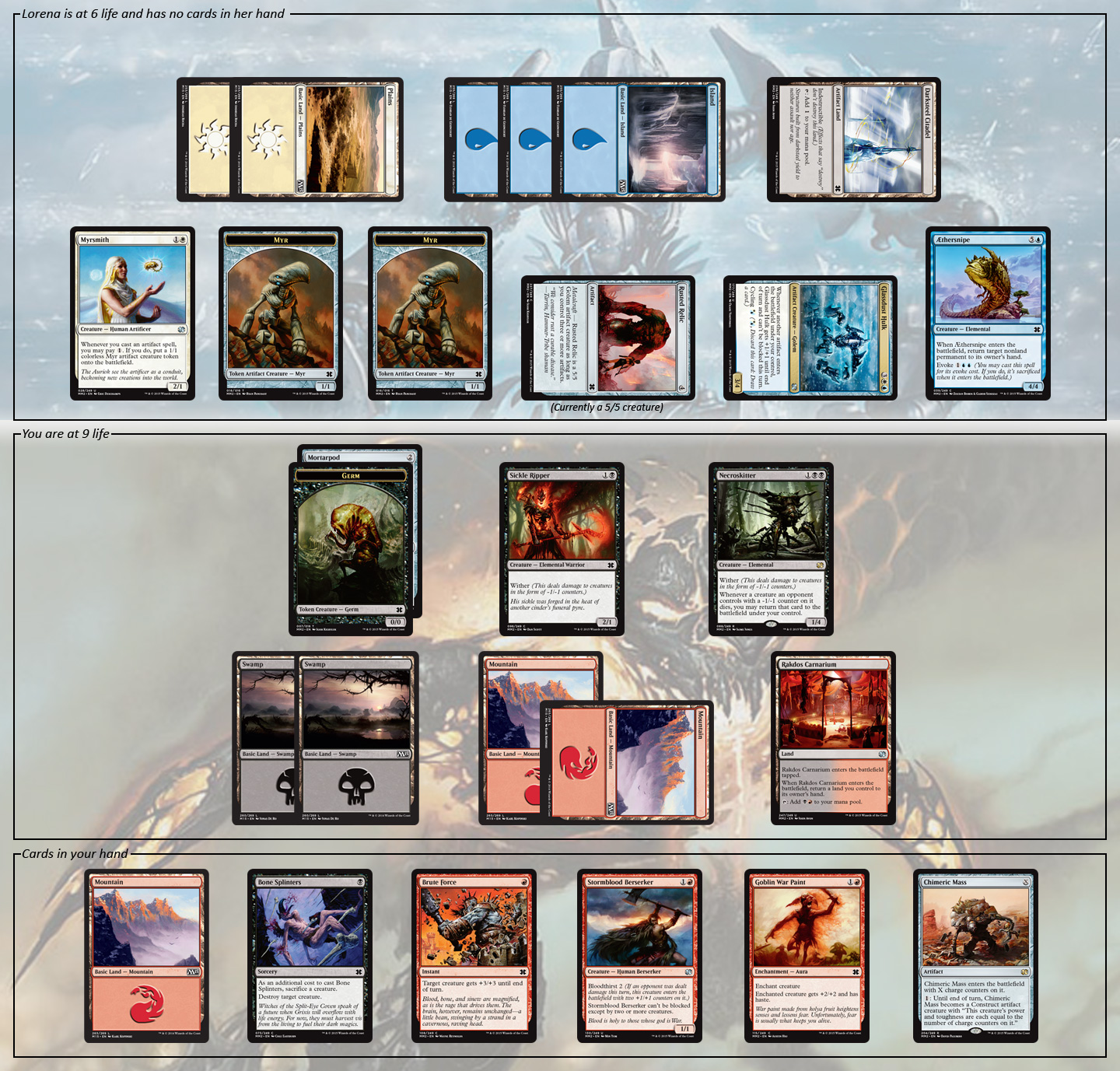 You are at 9 life with the following cards in play:

Lorena is at 6 life, has no cards in her hand, and has the following cards in play:

If you think you have a great solution in mind, donât put it in the comments! Instead, send it to puzzles at gatheringmagic dot com with the subject line âPuzzle â Now You See Itâ. Weâll include the best ones in next weekâs article along with the next puzzle!

We can start by taking stock of what our options are and potential responses. First, we can safely ignore Goblin Fireslinger's ability since it only hits players and we are at 6 life. So its only utility here is as a 1/1 blocker. Next, we note that we have little power on the board (8 power over six creatures), so trying to trample over seems unlikelyâwe gain up to 6 more off Thrive for 14 power, but the opponent has 17 toughness over four creatures.

âIt seems that the only route to success,â David Robinson notes, âis to take Iona, Shield of Emeria and a lot of Graeme's creatures off the field, and the only way we can deal damage (outside of combat) is using Bloodshot Trainee.â

Given the above insights, Matt Roman summarizes the resulting plan as follows:

As it turns out, because of the need to raise Bloodshot Traineeâs power via Noble Hierarchâs ability, most of your moves need to be made after you declare your attack. Jonathanâs solution elaborates on this:

Several respondents also pointed out one of the puzzleâs unfortunate consequences: âAn epic win using all our cards, except the Thrummingbird (which is there just for moral support),â Javier writes. âAlas,â Jon says, âthe poor Thrummingbird is feeling very left out. :( â