Login
0 Item
Advanced Search
Sign In
Create Account
Carey and Denton finish their discussion and turn to you. "I'll tap all six of my lands and cast Dwarven Lightsmith," he says. "Are you playing anything in response?"

You know perfectly well that the Fumble in Cécile's hand isn't a counterspell, but you glance at her hand and shake your head for the bluff. Cécile gives you a questioning look, which you wave away. "Hold onto it for a while longer," you whisper.

"Okay," Carey says. "Dwarven Lightsmith resolves, and gives all of our creatures +1/+1."

You and Cécile are playing in your local game store's Battlebond release event, which happens to be a Two-Headed Giant Sealed tournament. Cecile's charges, the Orsini sisters, are currently doing what evil twins do best in the 3-0 tables. You haven't played against them at all today, but you do have other things to worry about.

"I'll attack with my Phantom Warrior and my flying Pierce Strider," Carey says. "Denton will attack with just his Daggerdrome Imp. They'll all be attacking you."

You glance at the untapped Fan Favorite on Denton's side of the table, then at Cécile. "That's a bad sign," she says, and you agree. Between Denton not assisting with the Lightsmith's mana cost and the Fan Favorite staying behind, your opponents probably have something big coming.

"I'll block the Pierce Strider with my Fog Bank," Cécile says. "We can't block the Imp, and we're not able to block the Phantom Warrior anyway."

"You take five damage, then," Carey says. "That'll put your team down to seven life. And lifelink puts us toâ.â.â.â"

"Twelve life," Carey finishes. "We're back to our main phase now, and I'll tap my Spectral Searchlight to add one Red mana to Denton's pool. Denton?"

Denton taps out, and the hammer falls. "I'll cast Magmatic Force. Are you countering it?"

Cécile gives you a worried look. There's not much you can do but drop the bluff at this point. "Nope," you say. "It resolves."

"I'll just activate my Seer's Lantern to scry," you say, finding a Forest on top of your library and putting it on the bottom. "We'll start our turn now."

Cécile drops her creature into her graveyard, then moves to draw a card. "I hope you have a plan," she whispers.

"I hope I have one too," you admit. "I just had this feeling that you shouldn't be using that Fumble of yours just yet."

You pull a Pathmaker Initiate from the top of your library and add it to the Karametra's Favor in your hand. "What did you get?" you ask Cécile.

"Well, it'll allow us to steal the Magmatic Force if we can't think of anything else to do," you say.

"I guess so," she says dubiously. "I'll put a +1/+1 counter on Toothy, Imaginary Friend, since it triggers from my draw step."

Cécile turns to you. "I might as well cast the Switcheroo now," she says. "That should get the Force out of our way before we figure out what to do next."

You flick through the two cards in your hand for a little while. "No," you tell her, "not yet. I think I have an idea."

"You mean you have a better play in mind?"

You glance at your rather substantial library and turn back toward Cécile. "That depends," you finally say. "How much do you trust me?"

It is the start of your first main phase. Defeat Carey and Denton before the beginning of their next combat phase. 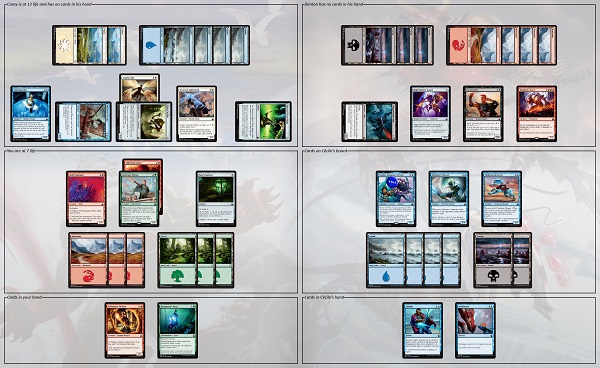 You're playing the Two-Headed Giant variant, which means that each of your respective teams share a single life total. Teammates also share a turn: You both untap your permanents during your team's untap step, declare all of your attackers at once during your team's combat step, and so forth. You know what cards are in each other's hand, and you may coordinate your actions based on this knowledge.

You and Cécile are part of the same team. You're considered to be individual players, but not opponents -- your "opponents" here are Carey and Denton. If you attack with a creature, you must choose a specific opponent that it attacks; that opponent is considered to be the defending player. Your opponents may assign any of their legal blockers to block creatures attacking themselves or their teammate.

You have the following cards in play:

Cécile has the following cards in play:

Cécile has the following cards in her hand:

Neither of you has played a land this turn. Neither of you knows the identity of any of the cards that are currently on top of your libraries.

Carey and Denton are at 12 life, and each of them has no cards in their hand.

Carey has the following cards in play:

Denton has the following cards in play:

If you think you've got a great solution in mind, don't put it in the comments! Instead, send it to puzzles@gatheringmagic.com with the subject line "Puzzle -- Molar Support" by 11:59 P.M. EST on Sunday, June 17, 2018. We'll include the best ones in next week's article along with the next puzzle!

"Although Grace has a lot of available blockers," David Gongon writes, "she is lacking in creatures that can interact with our flying and intimidate creatures. None of her Mono-White creatures have flying or reach, while Scrapheap Scrounger and Vectis Dominator can't block and are tapped, respectively. This leaves only Drill-Skimmer and Chancellor of the Dross available to block our Chosen of Markov, Howling Banshee, and Coral Trickster.

"However, while we can force through an attacker of our choice, Mother of Runes makes this prohibitively expensive on our resources. Thus, to guarantee lethal damage, Mari must swing with all three and audible her play depending on which creature Grace allows through."

"One priority is ensuring that Grace's Chancellor doesn't gain her life," David Edelstein adds."We have a number of ways of forcing through damage, but 13 would be well out of reach. While we could tap and then Fumble in response to the Mother of Runes shield to remove the Chancellor as a blocker, this would leave us out of tricks and unable to get lethal, so it's probably better to either Fumble our attacker or auction it off at the High Market for a point of life."

"This one's a lot of fun, because it involves meaningful decisions for our opponent," Addison Fox writes."We have three creatures that can each only be blocked by two of Grace's, so we need to figure out how to make each of them lethal individually. Pleasingly, all of them are completely different, making use of unique cards and interactions:

If the Coral Trickster is unblocked:

If the Chosen of Markov is unblocked:

If the Howling Banshee is unblocked:

Sean Keatley notes that Contaminated Ground lends itself to an alternative solution of Coral Trickster is unblocked. Instead of finding a way to untap Grace's Plains, you can wait for the turn sequence to do it for you:

The above also works for a scenario where the Howling Banshee goes unblocked (and saves you 1 mana that way).

"Coming up with alternative plans based on the way an opponent blocks is not exactly a rarity in these puzzles," Michael Feldman muses, "but to come up with essentially three different solutions from a single starting point is quite the unique juggling act. And that's only after coming to grips with the difficult reality that there's no way to remove or evade the Drill-Skimmer or the solution-breaking lifelink of Chancellor of the Dross.

"The many possibilities for Fumble sure do put a lot of premeditation into an accidental act. At least this puzzle gives the klutzes amongst us hope that our oops-es are not always in vain."