It would be an understatement to say that your Modern Masters 2015 Edition match has beenâ.â.â.âstrange. You and Rajiv are both playing base-green decks, youâre both using some questionable cards, and youâve both made similar plays and errors. Inexplicably enough, youâre also the proud owners of no fewer than five Karplusan Striders that showed up at your table.

Rajiv has been dominating your current game, eliminating your lone Aquastrand Spider and then pulling out several flyers to savage your life total. You fought back by dropping an Arrest on his Ulamog's Crusher and then trapped his 4/4 Skyreach Manta under an Oblivion Ring last turn. But Ravi has other flying creatures, and you donât think you have enough removal to deal with all of them.

Rajiv draws his card for the turn and reads it for a second. Then, he taps five lands and casts All Suns' Dawn, returning three cards to his hand: Karplusan Strider, Lorescale Coatl, andâ.â.â.âBanefire!

Thatâs bad news, and you know itâRajiv has enough mana to burn you to death next turn. That, of course, assumes that he doesnât kill you this turn, and you ponder your next move as he looks over his cards.

After a bit of thought, Rajiv finally glances at you. âIâm moving to my beginning-of-combat step,â he says. âDo you have any responses?â

It is the beginning of the combat step on Rajivâs turn; you may cast spells or activate abilities in response, after which Rajiv will declare his attackers (if any). Defeat Rajiv before he defeats you. 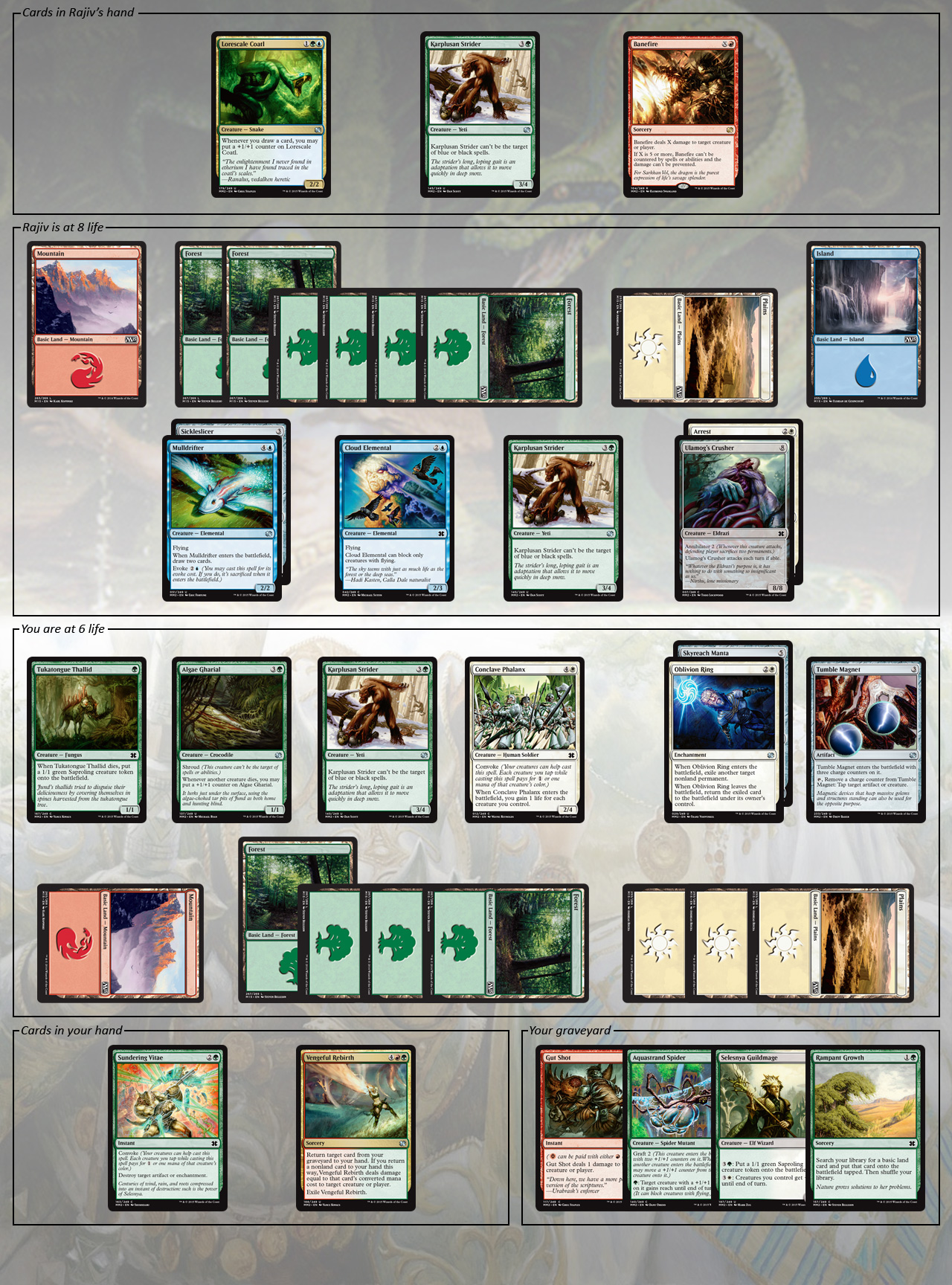 You have not yet played a land for this turn. You do not know the identity of the card that is currently on top of your library.

Rajiv is at 8 life and has the following cards in play:

Rajiv has the following cards in his hand:

Imagine the same situation as above, with one exception: Your Oblivion Ring exiled Rajivâs Alloy Myr instead of his Skyreach Manta. Is it still possible to defeat Rajiv before he defeats you? If yes, how would you do it? 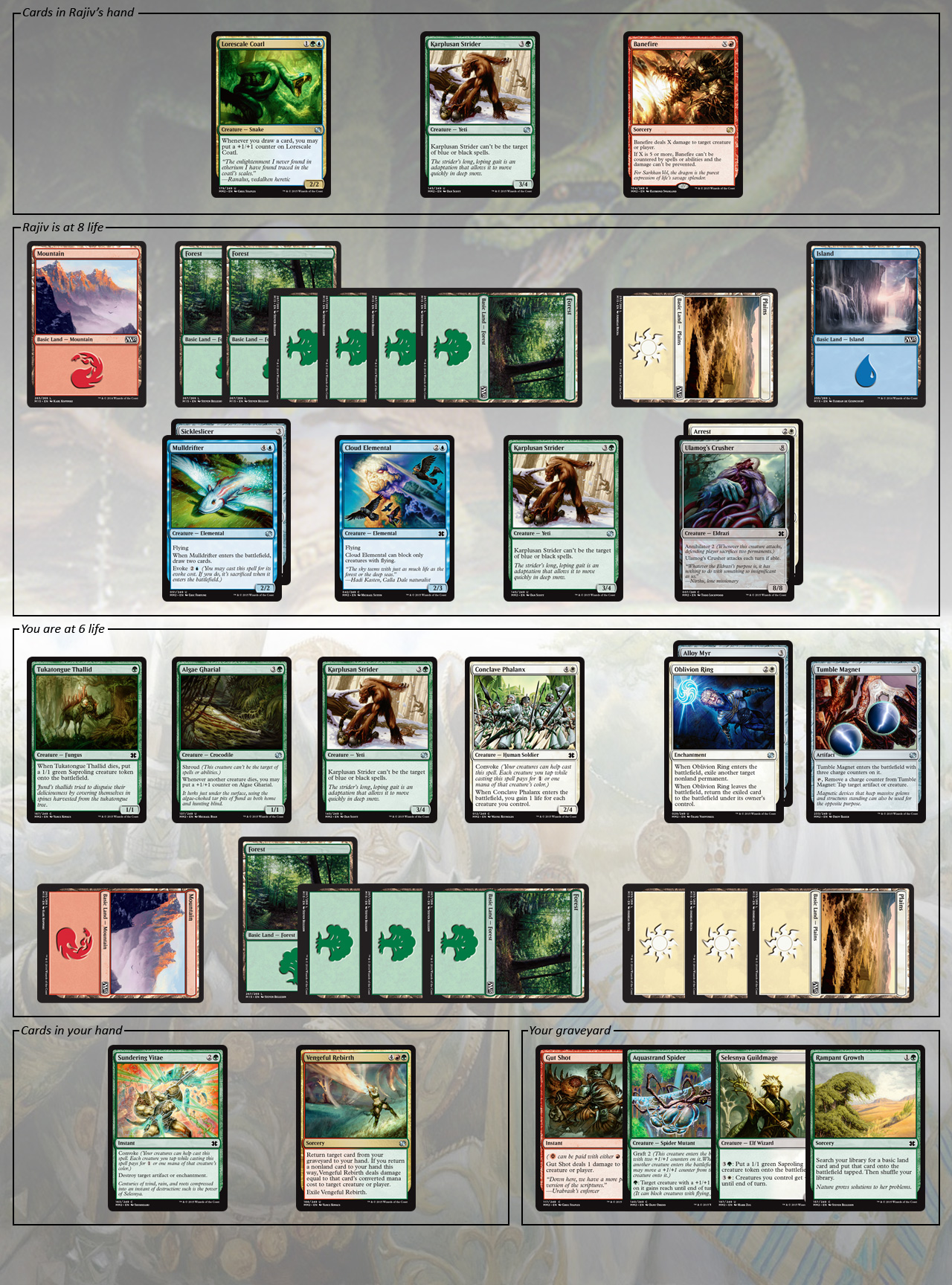 Click here to view the full board-stage image for this bonus question.

If you think you have a great solution in mind, donât put it in the comments! Instead, send it to puzzles at gatheringmagic dot com with the subject line âPuzzle â The Third Striderâ. Weâll include the best ones in next weekâs article along with the next puzzle!

âAll right, I could have won the game on that turn. But it wasnât an obvious play.â

Initially, it looks like we will have to kill the opponentâs blockers to allow one of our creatures through, perhaps by borrowing the Aethersnipe to return a creature or the Myrsmith to produce Myr to sacrifice to the Mortarpod. We have nowhere near enough land to support this though.

Aaron then notes a critical observation:

The first thing that jumps out at us is the interaction between Mortarpod, Sickle Ripper, and Necroskitter. Sickle Ripper has wither, so it can use Mortarpod to put a -1/-1 counter on any creature we want. When that creature dies, Necroskitter will bring it back to the battlefield under our control.â

From here, Tom gives a comprehensive idea of how the play should go:

âYou had a Stormblood Berserker and a Chimeric Mass in your hand that you could use,â Mari explains, âbut those options had problems, too.â

Equipping Mortarpod, casting Bone Splinters, and casting Goblin War Paint takes 5 mana total, so we don't have enough to cast the Berserker for Bone Splinters. We can't animate a 1/1 Chimeric Mass, and besides, we need that to trigger the Hulk.

âThatâs what you missed,â Mari finally says. âYou didnât need to bring a creature into play to cast the Bone Splintersâyou just had to make one survive.â

âThat just leaves one question,â you say. âHow were you able to figure all this out so quickly? Some of the e-mails are saying that youâre a genius, or a robot, or an alien, or all of them put together.â

âMeh,â Mari says. âThatâs another story. Iâll explain it over some ice cream.â

âYouâre buying,â she says, poking you in the chest.